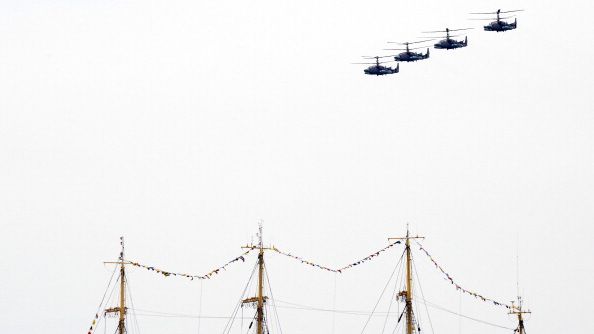 Russian Kamov Ka-52 Alligator attack helicopters fly above the masts of a tall ship in the Crimean port of Sevastopol on May 9, 2014. Helicopters have been a key asset for both Ukraine and Russia in the latest conflict between the two countries.  YURI KADOBN/AFP VIA GETTY IMAGES

Portugal is the latest country to provide Kiev with helicopters to increase the mobility of Ukrainian forces as they press the offensive against Russia.

Portugal will provide Ukraine with six Ka-32A11BC helicopters, according to an announcement from Helena Carreiras, Portugal’s Minister of Defense.

“At the request of Ukraine and in conjunction with the Ministry of Internal Affairs, we will make available to Ukraine our fleet of Kamov helicopters, which, due to the current scenario, the sanctions imposed on Russia, we are no longer able to operate. In fact, they do not have their airworthiness certificates, and we will not even be able to repair them,” Carreiras said.

Portugal acquired the helicopters following a 2006 deal under then-president Jose Socrates. They have long been a source of controversy. Major-General Francisco Grave Pereira, the head of Portugal’s National Civil Protection Authority, was forced to resign in 2016 following an investigation into the acquisition of the helicopters. Maintenance issues have also plagued the helicopters during a period when Portugal saw some of Europe’s worst wildfires.

In general, NATO countries have tended to avoid using Russian aircraft and combat systems, with a few exceptions. Notably, Eastern European members of NATO often have large stockpiles of Soviet-era military equipment — some of which has been donated to Ukraine in the context of the current conflict.

The Ka-32 is the civilian version of the Kamov Ka-27, which was developed for the Soviet Navy and entered service in 1982. Ukraine currently operates the Ka-27. Indeed, Ukraine’s helicopters are mostly aging Soviet models, much like the mixture of MiG-29 and Sukhoi jets used by the Ukrainian Air Force.

The Biden administration is reticent to give Ukraine warplanes though NATO members have supplied Ukraine with crucial replacement parts. That hesitance has not been extended to helicopters. The U.S. has given Ukraine 16 Mi-17 helicopters originally procured for Afghanistan. Latvia, Slovakia, and the Czech Republic have donated helicopters, including helicopter gunships, to Ukraine. Yet, even if Ukraine were to receive more advanced systems, it would require a large number of trained support personnel to keep them operational.

“This gesture demonstrates the commitment of Portugal to military support to Ukraine. Portugal has already mobilized to Ukraine individual equipment, weapons, ammunition, armored vehicles, communication systems, and drones, health and medical supplies, and has also expressed willingness to receive refugees and wounded fighters, as well as train Ukrainian soldiers,” said Manuel Matos dos Santos, a member of the

That deal included the supply of materials and tools, technical support until 2026, and training programs for six pilots and 21 mechanics. The first of those Black Hawks is set to arrive next year.