VIDEO: What The Buck? Elk Got Child’s Swing Stuck On His Head

Wildlife officers freed the young elk and returned him safely to the wild. 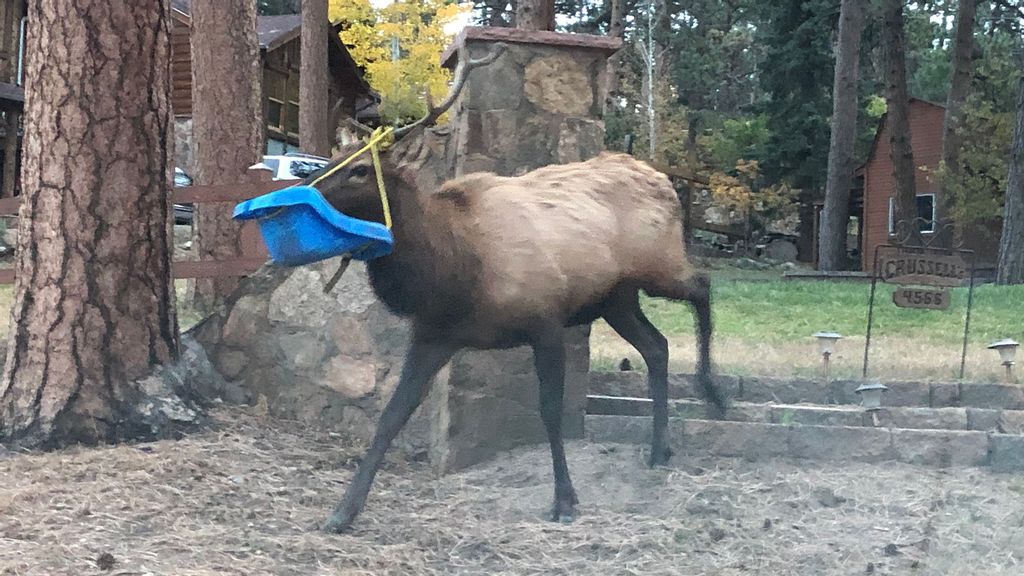 The elk with the swing stuck on his head was rescued by Colorado wildlife officials. (Colorado Parks and Wildlife/Zenger)

A young elk was saved by wildlife officers after it wrapped a child’s swing around its head like a muzzle, leaving it unable to eat or drink.

Colorado Parks and Wildlife said in a statement the two-and-a-half-year-old bull elk was first sighted near the Evergreen Golf Course in Jefferson County, Colorado on Oct. 23.

As seen in the footage, the distressed elk was charging up and down a hill entangled in the swing.

The locals who spotted the elk contacted Colorado Parks and Wildlife, which sent officers out to tranquilize the animal.

The animal was constantly on the move and wildlife officers caught up with it at Indian Hills, off the Parmalee Gulch Road. They successfully subdued the animal and removed the swing muzzle from its head.

CPW said in the statement: “This bull had a set of nontypical antlers, which most often happens when the pedicle or base where the antlers grow to get damaged at an early age. If a bull has a damaged pedicle, the animal will likely have nontypical antlers every year.”

After the tranquilizer wore off, the elk got back on its feet and appeared a little drowsy as it wandered into the woods.

The elk, also known as the wapiti, is the second-largest species within the deer family and one of the largest terrestrial mammals in North America, Eastern and Central Asia. Males (bulls) weigh about 700 pounds and are 5 feet high at the shoulder. Female elks (cows) weigh about 500 pounds. Calves are born in late May through early June.

Elks tend to inhabit forests and forest-edge habitats, where they feed on plants, leaves and grass. Male elks have large antlers that grow in the spring and usually drop in March or April the next year.

The International Union for Conservation of Nature classifies the elk as a “least-concern species” as it is abundant in the wild.

Colorado Parks and Wildlife reminded residents to remove items from their gardens that could entangle big-game animals.

The elk was tagged, and its antlers cut off to stop it from being harvested this season.