Latest endeavor by two-time Food Network winner proving to be a big hit. 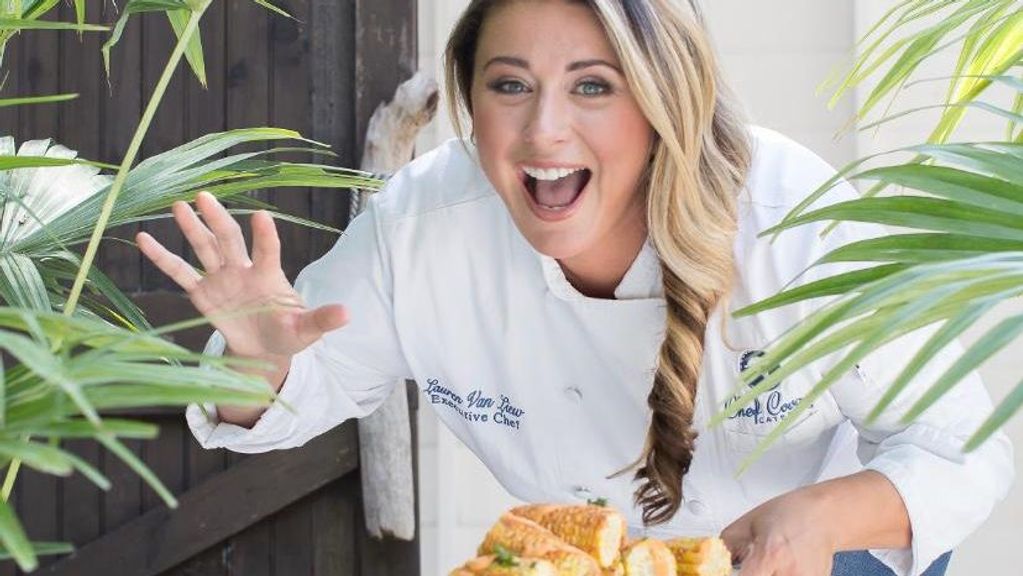 In the cut-throat culinary world, chef Lauren Van Liew proved to be a champion, winning both the “Chopped” and “Supermarket Stakeout” competitions on the Food Network. A passion that started as a teenager, cooking is all she knows.

Once a restaurant owner, Van Liew recently shifted her attention to the catering business in an effort to spend more time with her family. That decision looks to be paying big dividends, as she’s conquering both worlds — food and family. You can hear the passion in the New Jersey native’s voice when she talks about her love of creating kitchen magic. Her success on the Food Network helped enhance her brand, and it continues to rise.

Zenger News mixed it up with the two-time champion to discuss the catering world, her intentions to enter future competitions, her dish that bombed at a family function and more.

Zenger: How are you, and how is the catering business doing during the pandemic?

Van Liew: I’m good and the business is not bad. We just had to redo our model a little bit. Go back to basics. When I started my business, I started preparing meals for families. Where we are based in New Jersey has a lot of young families and the dinner-delivery system was really beneficial. That’s how I started, and then that kind of turned into catering because people would try a dinner on Thursday night and two weeks from now would be having a birthday party and call me to do the food for it. So, that kind of helped develop into the catering business.

So, when COVID happened, I went back to doing meals to people at home and families who didn’t like to cook or didn’t know how to cook. I really went toward a lot of the senior buildings, with residents 55 and above. A lot of those kind of people around here that didn’t feel comfortable going to the stores, so we would make lunch and dinner and deliver it to their doors. That’s how I stayed afloat in the thick of the COVID era.

Zenger: Do you remember when you first realized that you not only had a passion for cooking and creating in the kitchen, but that you could turn it into a career?

Van Liew: This is all I have ever done since I was 14. I started working in a bagel place and I loved it. It was a breakfast place on Saturday and Sunday, and I loved watching the girl flip eggs. I grew up in a family where food is everything. My mom and grandma are always in the kitchen cooking, so I was always there. When I got my first job and saw that I can get paid to do something I liked, that was awesome. That’s kind of where I started, and I’ve been in this business for 30-something years almost.

Zenger: A lot of changes in food, tastes, recipes over the course of 30 years. What are the noticeable changes you have experienced from start to present?

Van Liew: We have almost gone back. Now everything is about clean eating, very environmentally conscious. You don’t need a million sauces and a million different seasonings. People like a lot simpler and more clean food now. People also care more about where food comes from and don’t like to cook as much as they did before. That helps keep people like me in business.

Zenger: You mentioned simplicity in terms of spices and seasonings, but I enjoy your recipes because overall they are simplistic to a degree. Some recipes can be intimidating because one of the first two or three ingredients you’ve never heard of it, don’t know where to find it. You seem to stay away from that as much as possible.

Van Liew: Thank you. I appreciate it. My dad always said, “Keep it simple, stupid.”

Van Liew: It’s true, though. As long as it tastes good and I put a lot of love into it, that’s what matters.

Zenger: There is a lot of creativity in being a chef as well as catering functions, where there is the immediate reactions to a dish or event. Is that where your satisfaction comes from?

Van Liew: That sums it all up because this is my creative outlet. Some people are painters or involved in various activities; this is my immediate gratification. I put things into a pan that I think are going to go together, add some seasonings and then, right then and there, you see the pleasure people get from eating your food and being kind of part of you.

Zenger: You are a champion from the Food Network’s “Chopped.” How did winning that competition change things or enhance things for your career and business?

Van Liew: “Chopped” was awesome. I’m a small business in New Jersey and advertising is kind of hard because it gets very expensive, so I started with social media platforms that were free. But when I won “Chopped,” that gave me something to stand on and promote. So, it helped me get my business name out there more.

“Chopped” is such a well-known show and it really tests a chef’s skills. I had a blast being on the show, and winning obviously helped. It helped me step up my game where I could put my name out there a little bit more. I actually went on Food Network again, on “Supermarket Stakeout,” which I also won. So, being a two-time Food Network champion helps with the advertising and getting people engaged in your business.

Zenger: I understand testing chefs under highly chaotic conditions, but can you really give your best when you’re under time constraints and cooking with ingredients that you learn about minutes before the clock starts?

Van Liew: The show is as real as you see it. People are like, “Oh, it’s TV.” But you really have to mentally prepare yourself to think on your feet and multi-task. I went in there with one rule: cook what I know and stick to my roots. If I’m not a pastry chef, I’m not going to try and make ice cream because everyone fails when they try to make ice cream. Cook how you would cook at home, flavors you know, and if you don’t know what something is, mix it with flavors you do know and hopefully you can cover it up a little bit in case it’s something that’s weird or you don’t know what to do with it exactly.

Zenger: I was going to ask you if there was something that you ever made and it bombed, and then I see your Instagram post about your buffalo chicken dip that wasn’t a hit. What happened?

Van Liew: (Laughing). My family is a harsh critic, man. I don’t know what happened. I tried a different method of shredding the chicken. I always use ground chicken because I like that texture thing with it. I used ranch dressing that was out of a bottle instead of making my blue cheese like I normally did, and no one liked it. I ended up throwing it out at the end of the night. Everyone had a comment, don’t get me wrong. We are not a shy family here. They were all willing to tell me that the buffalo chicken dip was not that great.

Zenger: The buffalo egg rolls looked amazing, and it appeared that you redeemed yourself.

Zenger: Your Cinco de Mayo nacho spread also looked unbelievable. How many people did that feed and was there any left?

Van Liew: I love to celebrate everything and anything. That’s one of the reasons I went into this business. And Cinco de Mayo is a good reason to eat nachos and drink margaritas. I was like, let’s cover the table, and make the biggest display of nachos. I made a big thing of queso and a big thing of chicken chili with all the toppings. My kids were so excited. We had some people over and made a huge table of it. I thought to myself, I’m going to have to put this on social media because I would think someone else would want me to come over and try this. Oh my god, we had half a table left. Everyone took a doggie bag home.

Zenger: Do you see common mistakes that chefs make that are easily fixable?

Van Liew: I don’t know— I think to each their own. The reason I went into this business is because you really can’t mess up cooking. It’s your take and your spin on it. That’s why I don’t like baking and pastries; you have to be precise and measure and do everything right, so you can’t make mistakes there. But with cooking, you gotta wing it sometimes and go with it.

Zenger: Obviously, you can cook some pretty complex meals, but you do have children and sometimes kids just like simple. What is your go-to meal along those lines?

Van Liew: A good chicken cutlet goes very far in my house. We fry it up, add parmesan cheese, and that kind of gets served any which way. We make sliders out of it, we cut it up with some pasta, we eat them cold by themselves. My kids are really good eaters. I think it’s because mommy is always cooking something different and there is something always on the table. And the rule here is, you just have to try it. You don’t have to like it, but you do have to try it. And half the time they try it and they end up liking it. So it has expanded them to eat a variety of food.

Zenger: Do you plan on entering any more competitive format type of shows in the near future?

Van Liew: I love the competition shows. I would love to do “Beat Bobby Flay,” and “Guy’s Grocery Games.” I think that both of those shows have the same kind of feel, where you have to think on your feet. I think it keeps your skills sharp and it makes you constantly one-up the competition and always ahead of the game. Yes, I would love to do another show and I always keep a lookout to see when they are casting.

Zenger: I appreciate your time; you create some amazing dishes and I want to wish you continued success. Any parting words?

Van Liew: Thank you very much. I’d love it if people would check our website, as well as my Instagram account where I put up a new video every day. We’re also trying to be trendy and get started on TikTok.

Run To Winter Break Hit By Vaccine, Nats In Australia