New York City has seen a Christmas without snow and a wet New Year's, which are more characteristic of Miami
By John Murphy January 24, 2023
Facebook
Twitter
Linkedin
Email 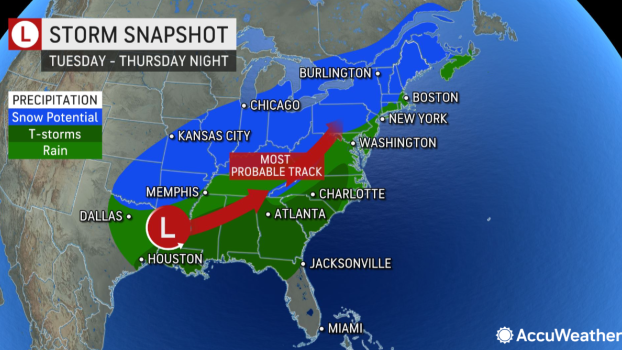 A snowless Christmas and a rainy New Year’s — something more typical of Miami that instead has become a reality in New York City this winter season.

The Big Apple is just days away from breaking a record that might seem unimaginable: the latest date to see measurable snowfall in recorded history. While the city has seen precipitation since the winter season officially began, it has primarily come in the form of rain instead of snow due to abnormally warm temperatures. At the official weather station in New York City’s Central Park, no measurable snow has been recorded this winter, only flurries.

On Nov. 7, the city was far from typical November weather as temperatures soared to 77 degrees Fahrenheit, a remarkable 20 degrees above average for the date. Temperatures remained higher than usual far beyond that date, with New York City failing to dip below 40 until Nov. 14, which is several weeks out from the average of Oct. 22.

Plenty of rain fell on the city throughout the month of November. Still, not even a trace of snow was recorded as the calendar flipped from Thanksgiving celebrations to the winter holidays in December.

Overall precipitation for the month of December was more than 2 inches above average, but the vast majority of that fell as rain instead of snow. Temperatures on New Year’s Eve maxed out nearly 15 degrees above average, and instead of Times Square spectators bundling up as usual, those in attendance for the annual festivities faced springlike weather with rain and temperatures in the mid-50s, one of the warmest New Year’s Eve celebrations ever recorded there.

While the city has gotten cold enough for snow throughout this winter season and some flurries have been spotted, the most the city has recorded at its official location in Central Park is a trace of snow, which occurred as recently as Jan. 14. But a trace amount of snow does not count as measurable snowfall, which brings New York City to 319 days in a snow drought as of Jan. 23, the third-longest snowless streak on record for the city. The longest snowless streak lasted 332 days and ended on Dec. 15, 2020.

New York City is also nearing the record for the longest stretch into the snow season without seeing more than a trace of snow. The latest date on record was Jan. 29, 1973. The 2022-23 season currently stands in second place after outlasting 1871, a year when snow was not measured until Jan. 21.

Whether or not the drought continues depends on how things shake up this week. If measurable snowfall is not recorded at Central Park on Monday, the next chance won’t occur until Wednesday.

The “streak,” or number of days between snowfalls, is now 319 days, tying one that ended Dec. 4, 2002, at third place. Assuming no measurable snow falls Monday, the second-longest snowless streak will be broken. That period was 320 days, ending Jan. 28, 1973.

The storm on Wednesday will deliver snow across the interior Northeast, but uncertainty remains whether the precipitation for New York City will come as rain or snow. Forecasters say cold, dry air will be in place during the first half of the week and that the placement of a high-pressure system will be key to the ultimate expanse of snow with this storm.

“If we don’t (get snow) Wednesday, then I think we have to go all the way to maybe late Sunday or Sunday night, and even then, it might just be mostly rain … the only game in town here is Wednesday, if we don’t do it then, then (we’re) going to go another several-day stretch without anything measurable,” said AccuWeather Senior Meteorologist David Dombek.

Snow or not, New York City will remain significantly below average for season-to-date snowfall into next week, barring a blockbuster event. From Dec. 1 through Jan. 18, the city typically sees 9.4 inches of snow and last year that value was 6.8 inches, according to the National Weather Service.

The NYC Department of Sanitation had a $7.6 million increase in their snow removal budget this year, so they could have a surplus. But then again, winter’s not over yet.