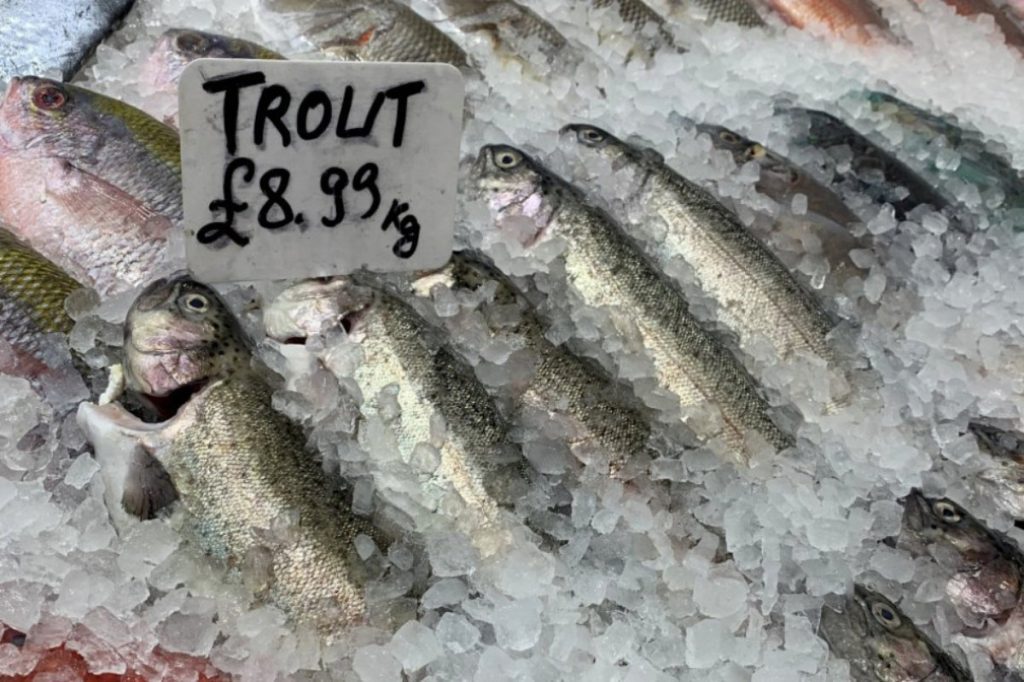 Eating just one portion of freshwater fish – such as trout or carp – could expose people to potentially toxic chemical compounds, warns a new study.

The American study found that eating just a single serving of freshwater fish per year could be equal to a month of drinking water laced with PFAS at high levels that may be harmful.

PFAS – or perfluoroalkyl substances – are a group of more than 9,000 different chemicals, some of which are already banned or highly restricted.

They are used in non-stick cookware and food packaging. In industry, the substances are used as stain repellents, coatings and fire-fighting foams.

The chemicals in PFAS are very persistent in the environment; the substances can accumulate in animals and can also be toxic, contaminating everything from drinking water to food, food packaging and personal care products.

PFAS build up in our bodies and never break down in the environment. They are found in the blood of virtually everyone, including newborn babies.

Very low doses of PFAS in drinking water have been linked to suppression of the immune system, including reduced vaccine efficacy, and an increased risk of certain cancers.

PFAS are also linked with increased cholesterol, reproductive and developmental problems and other health harms.

Environmental Working Group (EWG) scientists found the median amounts of PFAS in freshwater fish in the U.S. were an astonishing 280 times greater than forever chemicals detected in some commercially caught and sold fish.

The testing data showed that eating a single meal of freshwater fish could lead to similar PFAS exposure as ingesting store-bought fish every day for a year.

Study lead author Doctor David Andrews said: “People who consume freshwater fish, especially those who catch and eat fish regularly, are at risk of alarming levels of PFAS in their bodies.

“Growing up, I went fishing every week and ate those fish. But now, when I see fish, all I think about is PFAS contamination.”

“Eating one bass is equivalent to drinking PFOS-tainted water for a month.”

Even occasional consumption of freshwater fish can raise PFOS levels in the body, say scientists.

“There should be a single health protective fish consumption advisory for freshwater fish across the country.”

The researchers analyzed data from more than 500 samples of fish filets collected in the US from 2013 to 2015.

“PFAS do not disappear when products are thrown or flushed away. Our research shows that the most common disposal methods may end up leading to further environmental pollution.”

She said freshwater fish are an important source of protein for many people, and PFAS contamination threatens those who cannot afford to buy commercial seafood.

She added: “Identifying sources of PFAS exposure is an urgent public health priority.”

The researcher estimated that there may be more than 40,000 industrial polluters of PFAS in the United States, including manufacturing facilities, municipal landfills, wastewater treatment plants and airports.

The contamination of water has spread PFAS to soil, crops and wildlife, including fish.

Mr. Faber said: “For decades, polluters have dumped as much PFAS as they wanted into our rivers, streams, lakes and bays with impunity.

“We must turn off the tap of PFAS pollution from industrial discharges.”

Testing has shown that nearly all fish in American rivers and streams are contaminated with PFAS in the parts-per-billion range – even greater than parts per trillion.

The findings were published in the journal Environmental Research.

«Previous Post
How Taking Up Orienteering Can Help Stave Off Dementia»Next Post
Having An Education May Actually Protect Your Gut: Study