Parts of the Northeast will continue to experience wintry weather, as another storm is expected for the middle of the week.
By Renee Duff January 23, 2023
Facebook
Twitter
Linkedin
Email 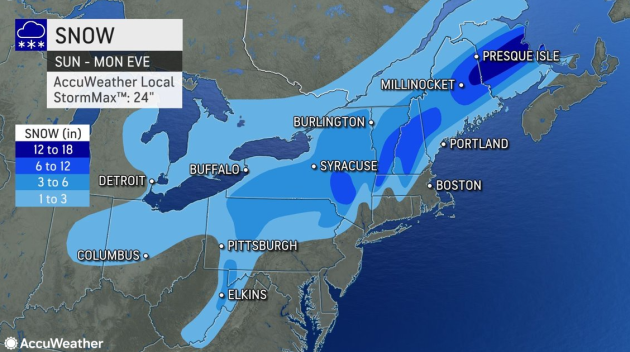 During the first half of next week, there will be a period of cold, dry air, and the location of this high will be crucial to the amount of snow that will fall overall from this storm. ACCUWEATHER

AccuWeather meteorologists say a storm at the end of the weekend will not be the last wintry hit for parts of the Northeast in the short-term as yet another storm is on tap for the middle of the week. Even with the back-to-back blows, experts say the snow drought may hold strong for at least part of the Interstate 95 corridor.

A shift in the weather pattern has put a stop to the relentless storm train in California and instead directed larger, moisture-packed storms into the Eastern states. One storm will affect the region Sunday into Monday before the second system arrives by Wednesday.

The anticipated track of these storms, combined with a lack of cold, dry air out ahead of them, will limit the potential for a blockbuster snowstorm to unfold. Still, enough snow, rain and wind can accompany each storm to make for slow and slippery travel.

Cold air is marginal ahead of this system in the Northeast, so there will be a lot of mixing issues with precipitation type as a result, according to AccuWeather Senior Meteorologist Tyler Roys.

Locations from Indiana and Ohio to northwestern Pennsylvania, New York state and Maine stand the best chance of receiving all snow with this event. The highest totals of over 6 inches should be confined to the highest terrain in Upstate New York and New England, though there is a chance heavier snow could extend into Down East Maine.

“For snow lovers in and near the big I-95 cities in the Northeast, it will be another disappointing storm, where umbrellas and raincoats will be the needed accessories, rather than snow boots and gloves,” AccuWeather Senior Meteorologist Bill Deger said.

While the period of rain from the storm is not likely to last more than eight to 12 hours along I-95 from Sunday afternoon to Monday, it can be heavy enough to lead to ponding and poor visibility on area highways.

AccuWeather forecasters say the stage could be set for the next storm at midweek to deliver more snow across the interior, and perhaps even closer to the I-95 corridor, than its predecessor. This snowier solution is not a slam-dunk, however, and will depend on a number of moving parts in the atmosphere.

“There appears to be a greater risk of a burst of snow at the front-end of the midweek storm,” Roys said.

A good setup for snow across the interior and along the I-95 would be for a cold high pressure area to linger over northern New England or southeastern Canada, which helps cold, dry air hold firm for a longer period of time. Forecasters say cold, dry air will be in place during the first half of next week, and that the placement of this high will be key to the ultimate expanse of snow with this storm.

Out of the two storms, the midweek storm has the better chance of delivering some snow to New York City, and especially the northwestern suburbs, according to Deger.

Boston may also be in line to receive some snow during the first part of the storm. From Philadelphia southwestward to Washington, D.C., there may be enough of a mild push to limit concerns of winter precipitation to the northern and western suburbs.

Regardless of snowfall during the first part of the storm, AccuWeather meteorologists say it appears likely that milder air will move into the Northeast throughout the storm and cause a changeover to a wintry mix and rain for many locations.

Prior to its approach in the Northeast, this second storm is likely to bring an accumulation of snow to the southern Rockies and southern Plains early in the week. There is the potential for a significant snowfall around Oklahoma City and even Dallas residents could see snowflakes flying on the back half of the storm.

St. Louis, Chicago and Detroit are other major metro areas that could receive enough snow to disrupt daily routines and travel. There will be less of a concern of mixed precipitation in these areas as they’ll be situated on the colder, northwestern flank of the storm.

«Previous Post
From Mattresses To Golf Balls, California Beaches Are Littered With Debris Following Recent Storms»Next Post
Potent Storm Racing Out Of The Rockies Could Produce Snow From New Mexico To Maine