As the end of January looms, snow is not the only type of weather on the minds of forecasters
By Alyssa Smithmyer January 23, 2023
Facebook
Twitter
Linkedin
Email 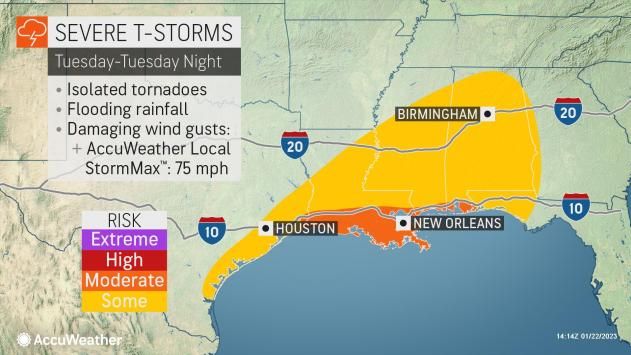 As the end of January looms, snow is not the only type of weather on the minds of AccuWeather forecasters. Our expert meteorologists have been carefully monitoring a storm threat across areas of Texas to North Carolina from Tuesday to Wednesday evening, which can carry the threat of disruptive and severe thunderstorms.

“A new storm moving out of northern Mexico, which will gather moisture from the Gulf of Mexico late Monday night into Tuesday morning, will be the impetus for the severe weather risk that begins in the Lone Star State on Tuesday,” explained AccuWeather Senior Meteorologist Bill Deger.

The feature is expected to emerge from the southern Rocky Mountains by early Tuesday morning and push into Texas. Warm, moist air will be pulled northward from the Gulf of Mexico and clash with the cold mountain air on the northern flank of the storm. This, along with other ingredients, will align to spark strong to severe thunderstorms from Tuesday to Wednesday evening across the South.

The primary concern across central Texas on Tuesday will likely be substantial rainfall and periods of gusty winds. However, as the day progresses, AccuWeather meteorologists say that locations farther east and southeast along the Gulf coast of Texas, Louisiana, central and southern Mississippi and Alabama will face additional threats.

“By late morning and afternoon, storms could start to turn severe in southeastern Texas, before spreading into the Lower Mississippi Valley on Tuesday night. Heavy, flooding rains are a big concern, but a few storms could also produce destructive winds, and a tornado or two can’t be ruled out,” stated Deger.

Throughout the daytime on Tuesday, the feature of interest will stomp across central and southern Texas and spread general rainfall amounts ranging from 1-3 inches. Residents in Austin and San Antonio, Texas, could see rainfall amounts ranging closer to 0.75 of an inch to 1 inch, but cities farther southeast along the Gulf coast will be in the prime location to tap into the warm moisture and southerly flow and see higher rainfall totals as potent thunderstorms develop.

Forecasters are mostly concerned about areas south of the Interstate 10 corridor from southern Louisiana to far southern Alabama during the overnight period.

“A tornado risk at night is especially dangerous, so residents from Lake Charles to New Orleans will need to have a way to reliably get warnings while asleep,” warned Deger.

Cities facing a moderate risk for severe weather from Tuesday evening and night include Baton Rouge, Louisiana; New Orleans, Mobile; Gulfport, Mississippi; and Mobile, Alabama. Even motorists traveling along portions of Interstate 20 Tuesday night will need to monitor for storms in the area that can reduce visibility and cause transportation delays. Gusty winds accompanying thunderstorms can also bring impacts of downed trees and powerlines. In the strongest storms, damaging wind gusts can reach up to the AccuWeather Local StormMax™ of 75 mph.

Into the morning hours on Wednesday, the threat of strong thunderstorms will shift eastward into Georgia and the northern panhandle of Florida. Thunderstorms will continue to push onward along the Southeast coast into Wednesday evening, bringing heavy rainfall and the risk for travel disruptions as far as central North Carolina.

“By Wednesday, the severe weather threat will be somewhat diminished compared to Tuesday, as some of the storm’s best energy heads north toward the Ohio Valley. Regardless, thunderstorms are still expected over a large swath of the Southeast, with a continued risk for downpours, gusty winds and an isolated tornado,” said Deger.

Into the evening hours on Wednesday, the zone for heavy rain and storms will shift to the Carolina coastlines. Overall, from Tuesday to Wednesday, a widespread portion of the Southeastern U.S. will receive ample rainfall ranging between 1-3 inches for many. Some spots can receive localized amounts as high as the AccuWeather StormMax™ of 5 inches, which can flood roadways, elevate streams and rivers which will cause reduced visibility and transportation delays.

By late week, the storm will track through the Northeast and New England states and continue to spread winter impacts along its northern flank.