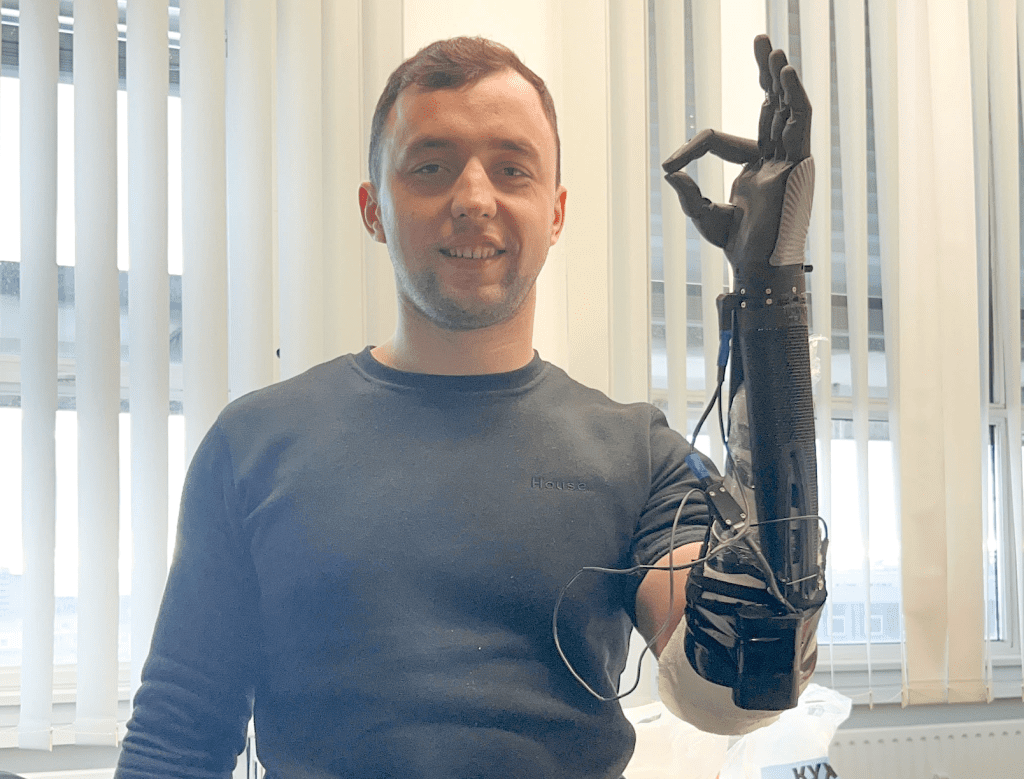 Open Bionics is the creator of the Hero Arm, an advanced 3D-printed bionic arm for amputees.

The CEO, Joel Gibbard MBE, traveled with his team to Munich, Germany where they delivered clinical training to three Ukrainian clinicians and met with their first two patients.

Ukrainians Andrii Gidzun and Vitalii Ivashchuk will be the first two soldiers to receive Hero Arms after both received mine-explosive injuries to their hands resulting in amputations.

He said: “I cannot describe it. I am pleased that I have such an opportunity to get such a functional prosthesis.

”I did not even hope for it. When the electrodes were applied, and I had the opportunity to test this prosthesis, I just enjoyed it.

”I was pleased, to put it mildly.”

The mission to Germany was organized by the charitable foundation Superhumans who have raised $40m (131.23 feets) (131.23 feet s) (131.23 feet) to develop a hospital in Lviv called the Superhumans Center, which will serve civilians and soldiers injured by the war with a focus on delivering prosthetics to new amputees, rehabilitation, and counseling.

The center is being developed in collaboration with Ukraine’s Ministry of Health and is supported by the first lady of Ukraine Olena Zelenska who serves as a board member.

While the group is actively supporting patients now, the center will open in April 2023.

The first two patients to receive their Hero Arms are financially supported by MasterCard, a financial backer of the Superhumans initiative.

The partnership between Open Bionics and Superhumans is the first to be announced by the group.

Open Bionics was the company selected by the group to deliver clinical training as well as prosthetic devices.

“Providing super-technological opportunities for people’s lives is our mission in collaboration with Superhumans.

”Innovative and high-quality services are now important in all areas of life, and we are convinced that Ukrainians deserve the best technologies,” says Inga Andreeva, CEO of Mastercard in Ukraine and Moldova.

The mission to Germany was to begin the process of fitting the first two soldiers with their new bionic hands and to ensure that clinicians on the ground in Ukraine are able to deliver care to both civilians and soldiers at scale long-term and sustainably.

“The philosophy of Superhumans is that our patients receive the best medical service at home, next to their families, in their own language.

Once the Superhuman center opens, it will take up to 3,000 patients each year. All services will be free for patients thanks to partners and donors,” said the CEO of Superhumans, Olga Rudneva.

“We’re extremely proud to be one of the first partnerships for the Superhumans team.

”The Hero Arm is a full-system device manufactured in the UK, so it’s ideal for fitting in challenging environments where there may be power outages and a lack of workshop space.

”Not only does the Hero Arm help people regain lost functionality, but it is also a useful psychological tool. We hope the devices bring confidence and happiness to their new users, and it brings greater independence and mobility.

”It was an amazing experience to meet the Ukrainian soldiers and hear firsthand about their strength of character throughout extreme adversity.”

According to reports, Ukraine is the most mined territory in the world right now. The latest UN report says 11, 144 civilians have been injured in this war.

”We hope the war comes to an end as soon as possible and will support with prosthetic care and rehabilitation in any way that we can,” said Joel Gibbard MBE, Open Bionics’ CEO.