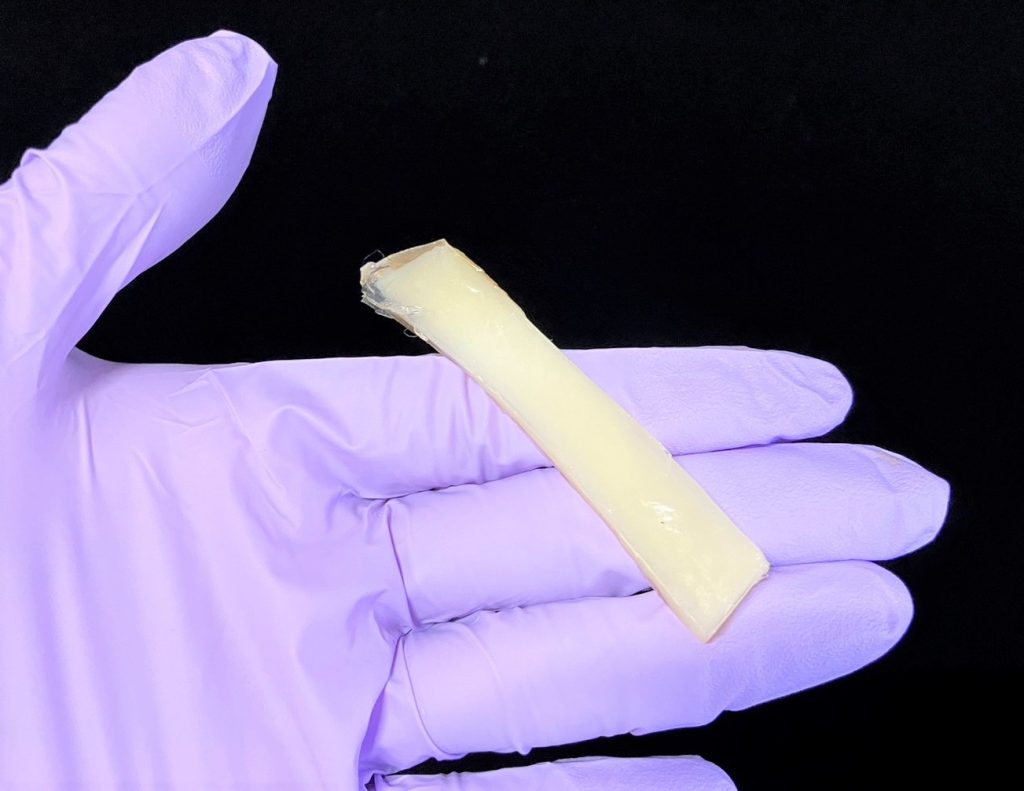 The lab-synthesized DN gel is much stronger and more elastic than the natural squid mantle. Squid tissue is being used by Japanese scientists to create new high-tech medical treatments - including state-of-the-art artificial limbs. HOKKAIDO UNIVERSITY/SWNS TALKER

The natural abilities of squid tissues and the creativity of chemists have been combined to take ground-breaking hydrogel research in new directions.

Researchers at Hokkaido University in Japan have combined natural squid tissues with synthetic polymers to develop a “strong and versatile” hydrogel that mimics many of the unique properties of biological tissues.

Hydrogels are polymer networks containing large quantities of water and are being explored for many uses, including medical prosthetics, soft robotic components, and new sensor systems.

Natural biological tissues exhibit unique properties essential for their functions, which researchers are seeking to replicate in hydrogels.

Muscles, for example, in addition to strength and flexibility, have physical properties that vary in different directions and are built from a hierarchy of structures working together.

Unlike the natural tissues that researchers want to mimic, most synthetic hydrogels have uniform properties in all directions and are structurally weak.

Polymer scientist Professor Tasuku Nakajima, of Hokkaido University, said: “By combining the properties of tissues derived from squid with synthetic polymers, we have demonstrated a hybrid strategy that serves as a general method for preparing hydrogels with useful hierarchical anisotropy and also toughness.”

He said: “In live squid, the mantle expands to take water into the body, and then strongly contracts to shoot water outwards as a jet.

“This ability depends on the anisotropic muscles within squid connective tissue.”

The researchers took advantage of the molecular arrangements within the natural system to build their bio-mimicking gel.

The researchers said that chemical and heat treatment of thin slices of the defrosted squid tissue mixed with polyacrylamide polymer molecules initiated the formation of the cross-linked hybrid hydrogel.

They say it has what is known as a “double-network structure” – with the synthetic polymer network embedded and linked within the more natural muscle fiber network derived from squid mantle.

Team leader Professor Jian Ping Gong said: “The DN gel we synthesized is much stronger and more elastic than the natural squid mantle.

The current ‘proof-of-concept’ work should be just the beginning of exploring many other hybrid hydrogels that could exploit the unique properties of other natural systems.

Prof Gong said: “Jellyfish have already been used as a source of material for simpler single-network hydrogels, so are an obvious next choice for exploring hybrid double-network options.

“Possible applications include load-bearing artificial fibrous tissues, such as artificial ligaments and tendons, for medical use.”