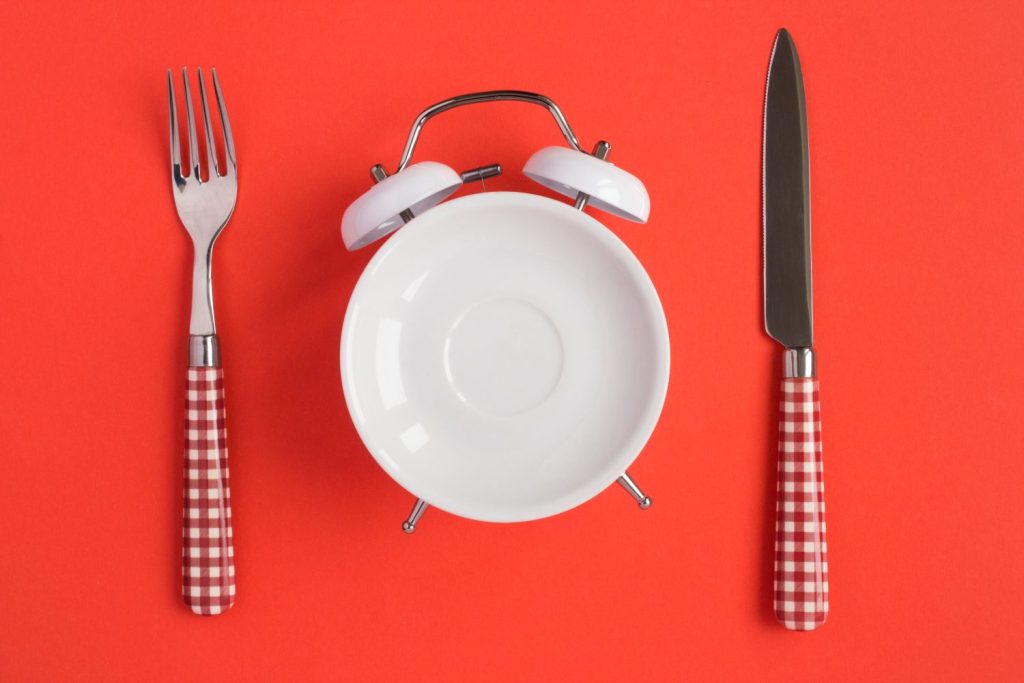 A table set with a fork and a knife including a plate as a clock. Intermittent fasting popular with celebrities is ineffective for shedding weight, according to new research. PEDAL TO THE STOCK/SWNS TALKER

Intermittent fasting popular with celebrities is “ineffective” for shedding weight, according to new research.

A traditional diet of fewer large meals and eating less overall is the best way to lose weight, according to the study.

The findings are based on almost 550 over-18s tracked for an average of six years.

“This includes the interval from first to last meal, from waking up to eating a first meal, from eating the last meal to going to sleep and total sleep duration.”

They go without food between certain hours – or on specific days.

Prof Bennett said: “The study did not detect an association between meal timing and weight change in a population with a wide range of body weight.”

Instead, the total daily number of large and medium meals of more or less than 1,000 calories respectively were each linked to increased weight.

Fewer small meals of less than 500 calories reduced the risk of obesity.

The average time from first to last meal was 11.5 hours with breakfast 1.6 hours after waking up and dinner four hours before going to bed. Average sleep duration was 7.5 hours.

Prof Bennett said: “Although ‘time-restricted eating patterns’ – known as intermittent fasting – are popular, rigorously designed studies have not yet determined whether limiting the total eating window during the day helps to control weight.

“The time interval from first to last meal was not associated with weight change during the six-year study.

“Eating less overall and fewer large meals may be a more effective weight management strategy than restricting meals to a narrow time window.”

They created a smartphone app named Daily24 for patients to log sleeping, eating and wake-up time in real time over six months.

Emails, text messages and notifications prompted use as much as possible during the first month and again during regular ‘power weeks.’

Prof Bennett said: “Frequency and size of meals was a stronger determinant of weight loss or gain than the time between first and last meal.”

The average age of the participants was 51 and the average body mass index (BMI) was 30.8 – which is considered obese. Most (80 percent) were white.

Prof Bennett said: “This study in a large group with a wide range of body weights did not detect this link.

“However, even short-term intervention studies may be valuable to help guide future recommendations.”

But it was observational so could not prove direct cause and effect. The team calls for further trials including a more diverse population.

Most participants were well-educated white women in the mid-Atlantic region.

With intermittent fasting, you only eat during particular windows of the day or week.

The idea is doing it for a certain number of hours each day or eating just one meal a couple of days a week helps the body burn fat – protecting against diabetes and heart disease.

According to the American Heart Association, four in 10 adults in the US are obese.

It does not offer a clear preference for frequent small meals or intermittent fasting – noting irregular patterns of total caloric intake appear to be less favorable for the maintenance of body weight and optimal cardiovascular health.

Altering meal frequency may not be useful for decreasing body weight or improving traditional cardio metabolic risk factors, it says.

The study was published in The Journal of the American Heart Association.