Two more storms are likely to unload snow over the interior Northeast through the middle of next week and deliver rain once more
By Alex Sosnowski January 20, 2023
Facebook
Twitter
Linkedin
Email 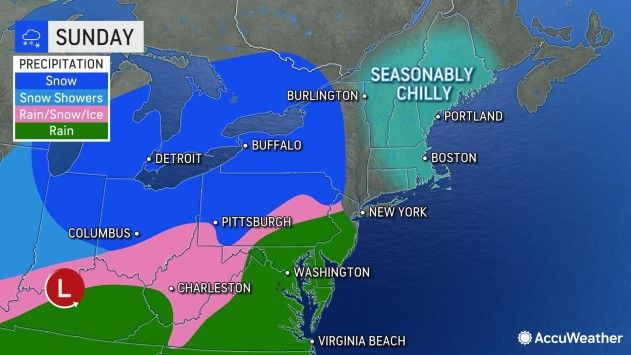 Two more storms are likely to unload snow over the interior Northeast through the middle of next week and deliver rain once more to the areas of the Interstate 95 corridor that are stuck in a snow drought. Travel disruptions from the rain and snow will be likely throughout the region, AccuWeather meteorologists say.

As storms take a break in California, a shifting jet stream pattern will favor larger, more moisture-packed storms in the Eastern states into next week. However, the track of those storms will ultimately determine where the boundary between rain and snow settles. For now, it appears that the boundary will be set up north and west of I-95 for the pair of storms.

As for next week’s activity, one such storm will affect the region Sunday into Monday before the second system arrives right on its heels from Tuesday to Wednesday.

Snow from the early-week storm will actually break out over the central Plains during Saturday night then spread to portions of the Midwest on Sunday morning. The first flakes of snow are likely to fall on parts of the mountains in West Virginia, western Maryland, Pennsylvania and New York state during Sunday afternoon and spread northeastward during Sunday night and Monday.

“Enough snow to shovel and plow from the Sunday-to-Monday storm is likely to fall from northern Pennsylvania and upstate New York to northern and central Maine,” AccuWeather Senior Meteorologist Bill Deger said. “The heaviest totals of over 6 inches should be confined to the Adirondacks and mountains of northern New England.”

For residents who live in that anticipated heavy snow area, it may be a good idea to prepare for power outages, according to AccuWeather forecasters.

Due to a lack of fresh cold air, it will tend to be wet, clinging snow across upstate New York and northern New England, and that may cause some damage to trees and power lines, AccuWeather Senior Meteorologist Brett Anderson explained.

“For snow lovers in and near the big I-95 cities in the Northeast, it will be another disappointing storm, where umbrellas and raincoats will be the needed accessories, rather than snow boots and gloves,” Deger added.

A key reason for the likelihood of rain with the Sunday to Monday storm and probably the midweek storm will be the failure of cold air to hold its ground. Arctic air is not necessary for snow, but there still needs enough fresh cold air that has some staying power. A good setup for snow along I-95 would be for a cold high-pressure area to linger over northern New England or southeastern Canada.

“This time around, there is very little cold air to be had, mainly because the high pressure associated with the cold air will be displaced off the Northeast coast,” Deger said. This setup will help usher in winds from the Atlantic Ocean and act to bring warmer air to the I-95 cities, once again keeping areas from Washington, D.C., to Boston from receiving any snow.

While the period of rain from the storm is not likely to last more than eight to 12 hours along I-95 from Sunday afternoon to Monday, it can be heavy enough to lead to ponding and poor visibility on area highways. Low cloud ceilings, fog and stiff winds can lead to airline delays at the major hubs during a busy part of the weekend and the start of the new workweek for millions of Americans.

Most of the rain will be over in Boston and areas farther southwest by Monday afternoon due to the fast-moving nature of the storm.

The second storm is likely to cause snow to break out over portions of the southern and central Plains late Monday afternoon and Monday night.

“Even though this storm is likely to head northeastward and toward the Midwest with most of the snow north and west of the storm track, a spinoff storm could form along the mid-Atlantic coast,” Anderson said.

“There may be just enough cold air early on during this storm for precipitation to start as snow from the Philadelphia area to New York City and Boston on Wednesday,” Anderson said. “However, strengthening winds from the ocean will likely bring a quick change to rain in this corridor.”

Based on the projected track of the storm, the best chance for a few inches or more of snow will be from north of I-70 in the Midwest on Tuesday and across northern New England on Wednesday, with the snow there possibly lingering into Wednesday night.

If neither of these two storms ends up producing measurable snow (defined as 0.1 of an inch or greater), there is an excellent chance that the snow drought in New York City and other locations may reach record length.

In the Big Apple, the longest streak of days without 0.1 of an inch of snow or greater was 332 which ended on Dec. 15, 2020. The current streak is at 315 and counting and is currently fourth on the all-time list.