Adele teared up on stage and told Rebecca and the audience: I know all about broken hearts
By Ben Barry January 19, 2023
Facebook
Twitter
Linkedin
Email 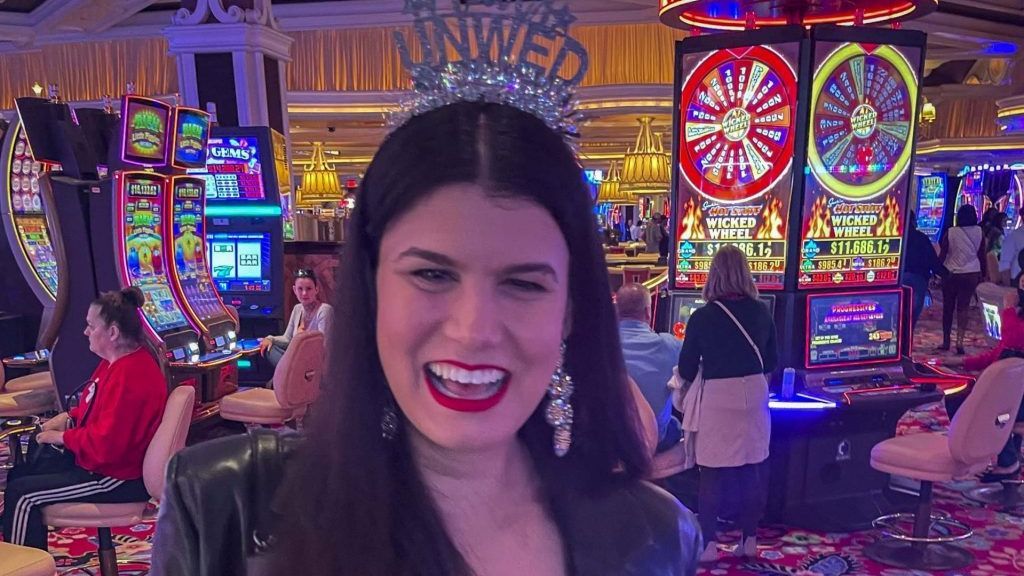 A woman flew to Las Vegas with 13 of her friends to mark her divorce with a “newly-unwed party” – and even “made Adele cry” when she spotted the singleton celebrating.

Rebecca Feinglos, 33, decided to celebrate the end of her marriage with a divorce party. After her six-year marriage officially ended, Rebecca and 13 of her best friends jetted from Durham, North Carolina, to Las Vegas, Nevada, to celebrate in December 2022.

She donned a tiara that read “Divorce Babe” and the group hit the strip – going to the spa, out for food, to bars and traveling in a stretched hummer – before heading to superstar Adele’s residency at The Colosseum at Caesars Palace.

The singer noticed the group in the crowd and realized why they were there after clocking a sign Rebecca had made, which read: “You got me through my divorce.”

Adele teared up on stage and told Rebecca and the audience: “I know all about broken hearts. You bringing all your friends is so moving to me.”

Rebecca says the trip made her want to reclaim the word divorce and she’s now focusing on herself and building “authentic and loving” relationships. Rebecca, a full-time writer, from Durham, said: “It was a weekend of fun, bringing together and an incredible group of women.

“I threw myself a newly-unwed party in Vegas with my closest friends. “Divorce is a long, emotional, and stressful process.

“We talk about the trauma of toxic relationships, but we don’t get real about divorce. “It can be traumatic, too. Mine certainly was and I’m so glad it’s over.

“My 13 best girlfriends and I went to Las Vegas not only to celebrate my divorce, but I wanted to celebrate them for standing by my side during one of the most difficult times of my life. “So, no more ‘failed marriage’ talk. No more divorce shame.

“Let’s celebrate leaving relationships that aren’t good for you. “And, let’s remember Adele’s advice: ‘Keep your friends close to you, because they’re better than any man.'”

After walking around the theater and meeting fans, Adele got up on stage and delivered a short speech about Rebecca. The singer – whose album, 30, highlights her own divorce – said: “Relationships fall apart, whether you’re married or not, it’s really difficult – it’s really traumatic.”

Before she encouraged Rebecca to keep her pals close.

Rebecca said: “It was an unbelievable moment. Either side of me were my best friends, the women who got me through it all. “I felt so seen, I felt connected. “We are all women coming together to feel powerful.

“In that moment I felt connected to her, to women and the friends around me – I was very emotional.”

Rebecca added: “It was a symbolic way to celebrate my divorce.

“That album ’30’ was emblematic for me, it came at the exact time I was separating from my ex-husband. “She put out this album where she was grieving – she reclaimed divorce for herself. “I am reclaiming the word divorce as a sign of strength, this is what the weekend was all about. “We never thought that she would actually talk to anybody.

“I brought a sign – saying ‘you got me through my divorce’ – on the off chance that Adele would see it.

Rebecca and her husband decided to divorce during lockdown after she lost both of her parents and re-evaluated what she wanted in life and she realized she was “unhappy”.

Rebecca said: “I was in lockdown with a partner, and it became clear to me that the marriage I was in was no longer serving me.

“I decided to end that marriage which was the gravest decision that I have ever made, It was incredibly difficult but one I am proud of. “After the death of my mum and dad, after the grief, all of us were facing, it hit me as I had thrust myself into work.

“It hit me that I was unhappy, I was exhausted, I was really feeling grief.”

Once she got back to work, Rebecca decided to take a year out which she calls her “grieve leave”. She said: “I started what I called grieve leave. I traveled, I was writing, documenting my journey and learned about my own feelings.”

When traveling, Rebecca started grieveleave.com, where she documented her journey and put out resources to support other people going through the same thing. Once her divorce was finalized, Rebecca wanted to get all her friends together, and thank them for supporting her.

She said: “Throughout my divorce process, it frustrated me so much, I was struggling to navigate the process.

“Once it became clear that my divorce was going to end, there was a light at the end of the tunnel.

“As soon as those papers were signed, we started planning.

“It was a weekend of fun, bringing together an incredible group of women.

“We all got together for dinner beforehand and all went to the show.

“I never in a million years imaged that Adele would see us, talk to my friend and be so touched personally by what we were doing there.”

Rebecca said her favorite song from Adele’s “30” album is “Hold On” as it resonates with her the most. She said it was her favorite because of the lyrics: “Let time be patient and let pain be gracious.”

Rebecca said: “It was a pretty unbelievable moment and I think if there wasn’t someone to video I don’t know if I would believe it myself.

“In the immediate term, it became clear to me that this is a moment of connection, I connected with the audience too – people were coming up to us and talking to us after the show.

“They were saying really positive, sweet things, there was a lot of ‘you go girls’ I didn’t expect it I didn’t know how supported I would be in this moment of celebration around this really tough time in my life.”