The threat of severe thunderstorms will shift east on Thursday to target portions of the Midwest and Southeast
By Bill Deger January 19, 2023
Facebook
Twitter
Linkedin
Email 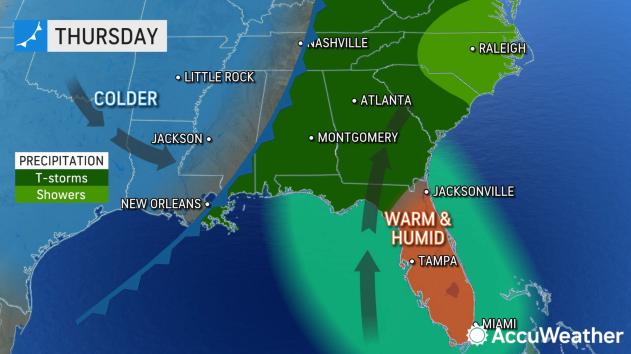 The threat of severe thunderstorms will shift east on Thursday to target portions of the Midwest and Southeast, extending south from the storm to the Gulf Coast will also prove to be a focal point for thunderstorm development as it moves to the east. ACCUWEATHER

Thunderstorms are expected to be ongoing from the northern Gulf Coast to the Tennessee Valley early on Thursday. The storms are forecast to track eastward in a line, which can reach as far east as northern Georgia and the western Carolinas by nightfall.

Farther north, thunderstorms may come in two rounds in parts of the Ohio Valley and southern Great Lakes. The first round will be ongoing in the morning and produce heavy, soaking rain. By the afternoon, storms will operate in one or more individual lines.

The storms later in the day are expected to be the strongest, likely first developing in eastern Indiana or western Ohio then expanding and rolling east through far southern Michigan, Ohio and Kentucky then into West Virginia and western Pennsylvania.

There will likely be a few lines of storms with brief heavy rains that can lead to flash flooding, as well as damaging winds, according to Roys.

Due to the fast-moving nature of the storms, the flooding threat should mainly be confined to highways and poor drainage areas rather than creeks and streams. However, it could coincide with the evening commute. Damaging wind gusts in excess of 50 mph could accompany that heavy rain in a few storms, dramatically reducing visibility for motorists, while also bringing down tree limbs and power lines.

There is also a small chance that a tornado or two could develop in Ohio and nearby areas late in the day on Thursday. This area is closer to the overall storm system and where winds will be changing with increasing atmospheric height, indicating a higher chance that a tornado could spin up.

The threat of severe thunderstorms as far north as Michigan, Ohio and Pennsylvania in January is rare and will be driven by an intrusion of unusually moist and mild air into parts of the Great Lakes and Northeast.

Lightning and thunder can even advance to the north of the severe weather risk area into parts of the Lower Peninsula of Michigan, western New York and southern Ontario, Canada. In the heart of winter, when snow and bitter cold are often more on the mind of residents in these locales, the loud roar of thunder will seem very misplaced.

The cold winds of winter will make a quick return in the wake of the thunderstorms, as a cooler air mass could trigger lake-effect snow showers downwind of the Great Lakes from Thursday night into Friday. Only a modest drop in temperature is expected behind this front in the South.

«Previous Post
California Set To Get Needed Break From Storms. How Long Will It Last?»Next Post
Major Cross-country Storm Leaves Motorists Stranded For More Than 16 Hours