“I enjoyed the swimming lesson, but it was a lot of effort for someone of my age. The post Navy vet goes swimming for first time since surviving WWII sinking appeared first on Talker.
By Sophie Watson January 19, 2023
Facebook
Twitter
Linkedin
Email 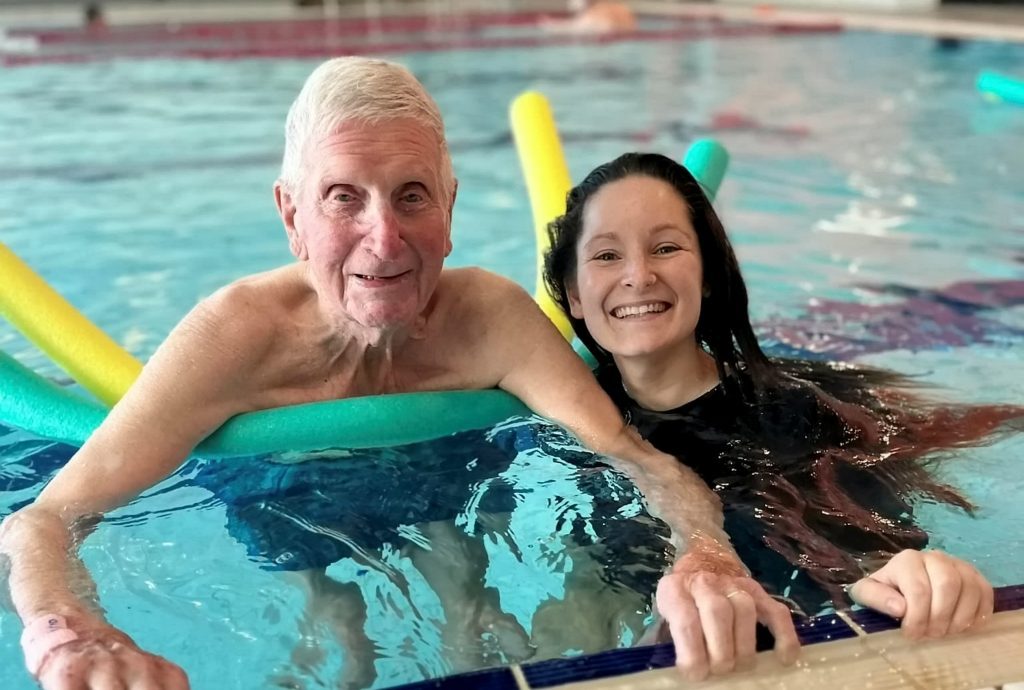 Veteran Roger Roberts and care assistant Holli Whitehouse in the water as Roger goes swimming for the first time since WW2. Nursing home bosses arranged for Roger Roberts to go for his first dip in 80 years after HMS Charybdis came under attack in the English Channel in 1943. FOLEY GRANGE CARE HOME/SWNS TALKER

A 97-year-old Royal Navy veteran has gone swimming for the first time since surviving his ship being sunk by German torpedoes during the Second World War.

Nursing home bosses arranged for Roger Roberts to go for his first dip in 80 years after HMS Charybdis came under attack in the English Channel in 1943.

Roger was just 17 when his vessel was bombarded and sunk during a German torpedo attack which left him stranded in the middle of the sea.

He was fortunate to be one of the 107 men on board to be rescued but has not set foot back in the water since the traumatic event, which claimed 464 lives.

War hero Roger – who is one of only two survivors from HMS Charybdis still alive – has now taken the plunge to go swimming for the first time in eight decades.

He had always been reluctant to return to the water but made it part of his bucket list when he moved into Foley Grange in Kidderminster, Worcs., England last January.

After nursing home staff heard Roger’s amazing survival story they wanted to help him achieve his dream and got in touch with a local leisure center.

Wyre Forest Leisure Centre then invited Roger down for a 20-minute swimming lesson last week, which he said was “a lot warmer than the English Channel.”

Roger, previously of Harborne, Birmingham, said: “I enjoyed the swimming lesson, but it was a lot at effort for someone of my age.

“I have to say though, the water was a lot warmer than it was all those years ago in the English Channel.

“There was ice in the water, and it was freezing. I was lucky. I was a good swimmer.

“We went into the water and had about two hours in the water trying to find planks of wood.

“We managed to scramble onto the planks and there were 60 men holding onto it.

“It was very hard. I managed to come out in one piece from the incident, but a lot didn’t.

“You had to look after yourself as well as your friends, and we all put our arms around each other and eventually we were rescued.”

Sprightly Roger first learned how to swim at primary school and went on to represent Birmingham in district competitions.

He was married to his beloved wife Adeline for over 70 years before she passed away five years ago.

Roger added: “It was love at first sight with my wife and I have a photo of her on my wall in my room at the care home.”

He was given a shilling and sent home on a train after his sisters contacted the army recruitment team to inform them of his age.

A year later, aged 17, he enrolled in the Royal Navy in 1943 as a Stoker and boarded the HMS Charybdis – a Dido-class cruiser launched in 1940.

Whilst on board, the HMS Charybdis was hit by German torpedo boats in the English Channel in October 1943 and started to sink.

Working in the engine room at the time of the strike, he was told to abandon the quickly sinking ship.

Rogers along with 568 men were left stranded in the middle of the English Channel.

Fortunately, he was able to find a raft and was rescued by a British ship and taken to Davenport with 104 other survivors.

Roger was one of the lucky men who survived as sadly 464 men from the HMS Charybdis died that day in the English Channel.

He said: “My motto in life is ‘never give up and keep going’ and that’s what made me want to get back in the water.

“If you have a problem do not give up as everything will work out in the end.”

When Roger returned from the war, he worked in various jobs, serving in the military police out in Egypt and Palestine.

He later settled in the motor industry working for 30 years as a supervisor for Austin Morris Motor Company.

Marilyn, 72, Roger’s only daughter said: “I didn’t know about what happened to my dad during the war until I was about 20, as he rarely spoke about.

“When I found out I was so shocked.

“He was very lucky to survive and him and his friend John are now the only two living survivors from the catastrophe.”

The World War Two veterans has now been at the care home for 12 months when he has become a popular resident among staff.

Foley Grange’s home manager Hannah Atkinson said: “When I watched Roger getting back in the water, it was a very heartfelt moment and brought tears to my eyes.

“Thanks to the Wyre Forest Leisure Centre, we’re now able to offer swimming sessions to our residents every Tuesday and Roger will be a regular attendee.”