Driving conditions will be difficult, during the height of the storm in portions of Colorado, Nebraska, Iowa and Wisconsin
By Renee Duff January 18, 2023
Facebook
Twitter
Linkedin
Email 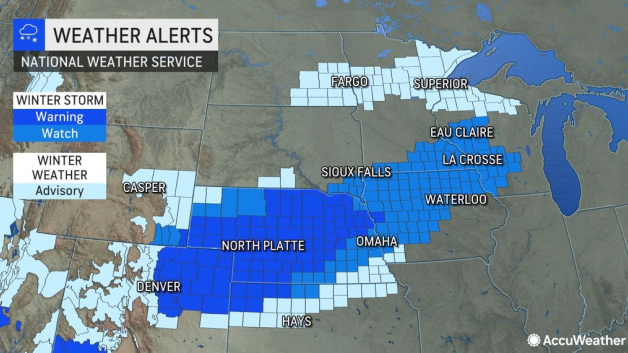 AccuWeather’s expert team of forecasters continues to track the makings of a potent winter storm set to wallop more than 1,700 miles of the United States with heavy, travel-disrupting snow.

Experts warn that driving conditions will be difficult, if not impossible, during the height of the storm in portions of Colorado, Nebraska, Iowa and Wisconsin where snow can fall at a rate too fast for road crews to keep up.

The storm, which AccuWeather meteorologists have been tracking for more than a week, was delivering another round of mountain snow and low-elevation rain to the Four Corners region Tuesday. The storm will swing eastward to the central Plains by Wednesday and then northeastward to the Great Lakes region Thursday.

Along its journey, the storm will spread a strip of heavy snow on its northern flank. Denver; Omaha, Nebraska; Des Moines, Iowa; and Green Bay, Wisconsin, are among the metro areas likely to sit within the corridor of road-clogging snow.

Travel is expected to be brutal in and around the Denver metro area, including at the city’s international airport, from late Tuesday night into midday Wednesday. The latest forecast from AccuWeather for the Mile High City puts snowfall amounts in the 6- to 10-inch range, which could settle at historic levels for the month of January.

A winter storm warning was in effect for Denver as of Tuesday morning, along with a slew of other winter weather alerts that stretched from Colorado to Wisconsin.

Motorists are advised to plan ahead and have an emergency kit handy in their vehicle which includes essentials like a first-aid kit, blankets, water and snacks. In late December, a snowstorm in the greater Denver area brought travel to a standstill and stranded motorists for more than eight hours.

“Even though the nation’s midsection is no stranger to snow in the heart of winter, several inches of snow falling over a short duration will likely still be enough to cause tricky travel,” AccuWeather Meteorologist Mary Gilbert said.

Interstate 80 could be impassable across Nebraska where more than a foot of snow can fall, as well as along the stretch of I-29 from Omaha to Sioux Falls, South Dakota. It is in this part of the Plains where snow totals are most likely to approach the AccuWeather Local StormMax™ of 24 inches.

Road closures will be possible as a result of heavy snow and windy conditions reducing visibility.

Gilbert noted that Minneapolis would receive a few inches of snow Wednesday night through Thursday, with more significant accumulation expected in locations to the south and east of the city. The Thursday morning commute into the Twin Cities is likely to be slower than normal as a result.

In eastern portions of Iowa, snow can whiten the same ground that was churned up by powerful tornadoes Monday.

AccuWeather meteorologists expect enough mild air to flow into Chicago and limit the risk of wintry precipitation in the Windy City. However, forecasters caution that some accumulating snow could still fall to the north and west of the city.

Along the southern fringes of the snow, a period of sleet and freezing rain can occur from northern parts of Kansas and southeastern Nebraska to southern Iowa and the lower peninsula of Michigan. Untreated road and sidewalk surfaces can quickly become slick with ground temperatures expected to be around the freezing mark ahead of the precipitation’s arrival.

A few lingering flurries across the Great Lakes region will be all that’s left of the storm by Friday with cold but calm conditions expected elsewhere.

As the storm travels through the nation’s midsection, downpours and severe thunderstorms are expected on its southern flank. Farther east, this storm can bring another round of snow and icy conditions to parts of the interior Northeast and New England during the latter half of the week.