Original Paintings By Queen Victoria Could Fetch Over $24k At Auction

These paintings display the colorful side of a woman who famously dressed in black after the premature death of her husband.
By Adam Dutton January 18, 2023
Facebook
Twitter
Linkedin
Email 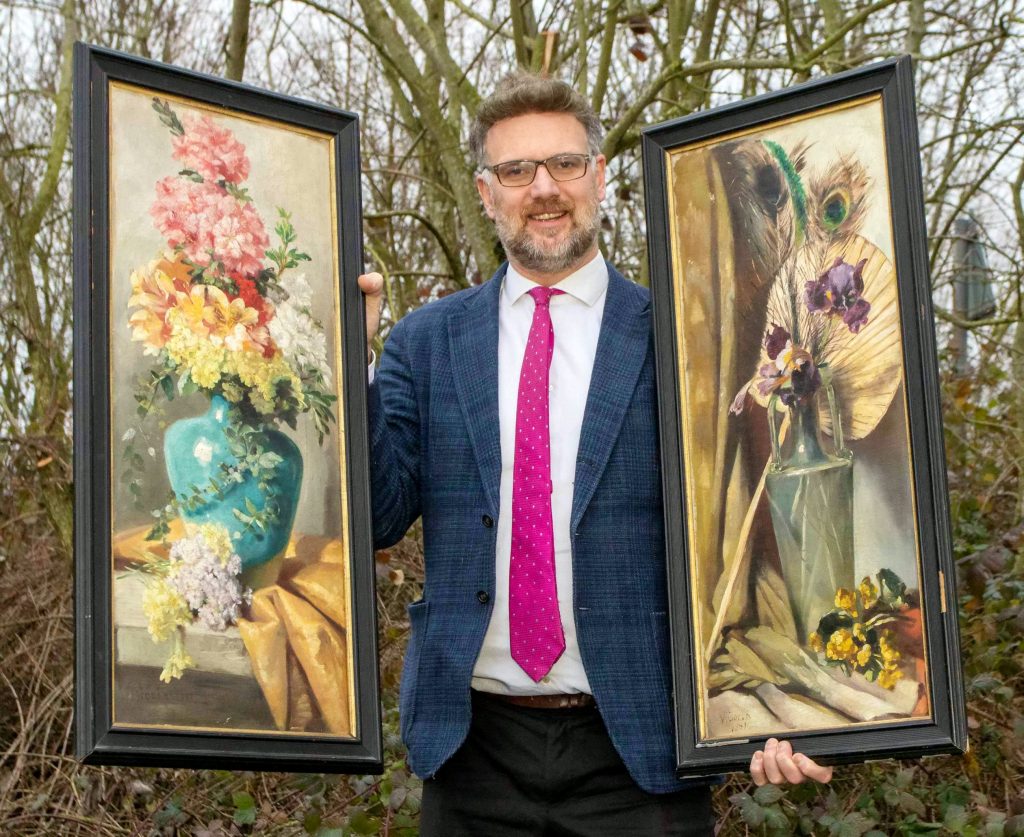 Charles Hanson, owner of Hansons Auctioneers, with Queen Victoria's paintings. A pair of original paintings by Queen Victoria dating back around 170 years could fetch £20,000 ($24,502) at auction after being discovered at a family cottage. HANSONS/SWNS TALKER

A pair of original paintings by Queen Victoria dating back around 170 years could fetch £20,000 ($24,502) at auction after being discovered at a family cottage.

The “important works of art” were found among family heirlooms by stunned antique experts who were asked to value items at a property in Surrey.

The vibrant paintings are said to show the artistic and colorful side of a woman who was famed for wearing mournful black for decades following Prince Albert’s death.

Both of the large oil paintings depict vases of flowers and are believed to date back to the second half of the 19th century, during her 63-year reign as Queen.

One features purple irises in a green vase next to a posy of small flowers while the other depicts a mix of pink, yellow, orange and white blooms and Hydrangeas.

However, it is expected they could fetch much more due to their royal pedigree.

Chris Kirkham, associate director of Hansons London, said: “I was astounded and delighted in equal measure when I discovered the paintings.

“I was asked to value a few items at a cottage in Surrey but had no idea of the magnitude and importance of the antiques tucked away.

“The royal items were purchased decades ago by the seller’s grandfather.

“He lived on the Isle of Wight and we understand he acquired them at a sale that offered items relating to Osborne House, Queen Victoria’s holiday home on the island.

“Both paintings bear letters of provenance on the reverse.”

The letters, dated October 1945, said, “With reference to the two pictures said to have been painted by Queen Victoria, which you bought at the Carisbrooke sale.

“I have since seen Lord Carisbrooke, and he says there is no doubt that they were in fact painted by the late Queen Victoria.”

Kirkham added: “There could be no better person to vouch for these paintings because Alexander Mountbatten, 1st Marquess of Carisbrooke, was the last surviving grandson of Queen Victoria.

“The Isle of Wight is home to Carisbrooke Castle Museum. It was founded in 1898 by Princess Beatrice, Queen Victoria’s youngest daughter.

“The Princess died in 1944 and a sale of some items took place around that time.

“These paintings display the colorful side of a woman who famously dressed in black after the premature death of her beloved husband Prince Albert in 1861.

“Queen Victoria lived another 40 years, passing away at the age of 81 in 1901 after more than 63 years on the throne.

“Perhaps painting those floral canvases and creating other works of art provided a little contentment and happiness in the years that followed Albert’s death.

“We hear a lot about King Charles’s paintings so it’s particularly interesting to see the work of his ancestor Queen Victoria.

“According to the Royal Collection Trust, domestic life provided a common subject for her watercolors and drawings. These studies demonstrate that theme.

“For any collector of royal memorabilia, this is a rare opportunity to own unique works of art by one of Britain’s best known monarchs.

“The paintings really deserve to be on public view to honor the UK’s royal heritage.”

The seller, from London, who wished to remain anonymous, said: “My grandfather collected amazing objects over the course of his life.

“He was fascinated by antiques and collectibles. He originated from the Isle of Wight so it ‘s no surprise he bought items at the Carisbrooke sale.

“It’s always hard to part with family heirlooms but my father, who inherited them, has passed away.

“They deserve to come out of the shadows to be seen and enjoyed by others.”