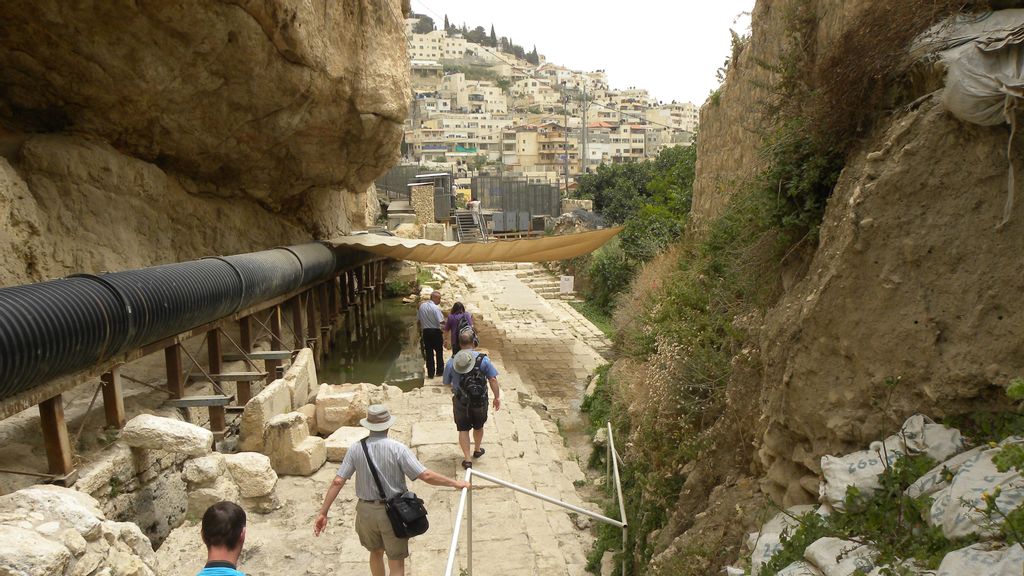 Taken from the bottom of the Roman road that ran down the valley between the city of David and Mount Zion. The entire causeway is set to be renovated and opened to tourists in 2025. (Ian Scott/Flickr)

JERUSALEM — A major biblical site will soon be open to tourists who visit Israel.

Israeli authorities recently announced  plans to finish excavating Herodian-era archeological sites mentioned in the Christian Bible and open them to tourists in 2025.

Israel Antiquities Authority archeologists are engaged in twin massive projects: to excavate the debris-filled Pool of Siloam measuring 69 meters (226.38 feets) (226 feet ) wide and open the 600-meter (just over 1/3-mile) stepped Pilgrimage Road along which the pious ascended to Herod’s Temple 2,000 years ago, after first attaining a state of ritual purity by immersing in the ancient “mikveh” (a bath used for ritual immersion) fed by the Gihon Spring.

Both stellar attractions, slated to open in 2025, promise to jump-start tourism in the Holy City afflicted by the COVID-19 pandemic. Unresolved is how the masses of visitors and pilgrims will reach them.

Pastor John Hagee, founder and chairman of Christians United for Israel, made this statement to Fox News Digital:

The Pool of Siloam’s excavation is highly significant to Christians around the world. It was at this site that Jesus healed the blind man (John:9), and it is at this site that, 2,000 years ago, Jewish pilgrims cleansed themselves prior to entering the Second Temple. The Pool of Siloam and the Pilgrimage Road, both located within the City of David, are among the most inspiring archeological affirmations of the Bible. Christians are deeply blessed by the City of David’s work and Israel’s enduring commitment to ensuring religious freedom to all who visit and live in the Holy Land, especially Jerusalem — the undivided capital of Israel.

However, licensed tour guides say the area’s transportation plans are ill-conceived. Currently, buses, taxis and private cars are routinely stuck in traffic, inching along the two-lane Ophel Way at the southeast corner of the Old City’s Ottoman ramparts. In frustration, many drivers give up trying to reach the Dung Gate — the most popular access point for the Western Wall and the Temple Mount/Haram ash-Sharif. Painfully executing a three-point turn, they slink back northward toward Sultan Suleiman Street, where equally sclerotic traffic jams await them.

Infrastructure work now being carried out in the vicinity by the municipality, the Moriah Jerusalem Development Corporation — which was established in 1987 to carry out development work for the local government — the Ministry of Tourism, the Western Wall Heritage Foundation, the Jerusalem Development Authority and several other bloated bureaucracies is unlikely to cut the Gordian Knot of too many vehicles navigating too few roads. Site manager Abed Hawash explains that while bollards may prevent cars from illegally parking on sidewalks, cosmetic changes won’t improve traffic congestion.

The solution on offer: a cable car has been proposed to zip visitors from Remez Square and the Turkish train station there now (re-purposed as the First Station entertainment complex) to a rooftop terminus crowning the yet-to-be-built offices of the City of David National Park — which will be erected atop the archeological wonders uncovered beneath the former Givati parking lot.

This approach raises a number of doubts among locals.

First, it remains unclear if the cable car will be able to transport the myriad throngs who regularly flock to the historic area.

Second, the extension of Israel Railroad’s Jerusalem line to two new stations — one at King George V and Jaffa, and the other by the Khan Theater — is only scheduled to be inaugurated in 2030. Thus, for the better part of a decade, the chaos by the Dung Gate will only be transposed to a new location a few kilometers to the west.

Third, although the cable car was originally proposed to continue eastward across the Kidron Valley, also known as the Valley of Jehoshaphat, to reach the Mount of Olives — where it would connect with the terminus of the Green Line slated to open in 2025 — the light rail was truncated by the Ministry of Finance and now will end at the Hebrew University’s Mount Scopus campus. Patients wishing to reach al-Makassed Hospital, the residents of several east Jerusalem neighborhoods, and the many tourists/pilgrims trying to explore the area’s myriad Jewish, Christian and Islamic sites will be out of luck.

Currently, travelers must negotiate the muddle of three bus stations in the vicinity of the Damascus Gate to find the No. 275 bus to the Mount of Olives. In a small step to normalization, buses operating from there now accept the Rav Kav transportation card. Similarly, maps in Arabic, Hebrew and English have been posted in the area and buses renumbered so that they don’t confusingly bear the same number as their counterparts in west Jerusalem.

No less importantly, the specter of a cable car supported by monumentally ugly pylons desecrating the sacred landscape has been decried by Emek Shaveh — an Israeli nongovernmental organization working to prevent the politicization of archeology in the context of the Israeli-Palestinian conflict.

On Oct. 6, a cornerstone-laying ceremony was held for the 200-meter (656-foot) suspension bridge over the Hinnom Valley/Wadi Rababa that will facilitate the cable car. Present there were Minister of Jerusalem Affairs and Heritage Ze’ev Elkin, then-Minister of Tourism Yoel Razvozov, Jerusalem Mayor Moshe Leon, and Israel Antiquities Authority director Eli Eskosido.

“The suspension bridge is an important strategic project led by the Ministry for Jerusalem Affairs and other partners. We are working to turn the Hinnom Valley into a developed tourism zone and in so doing achieve two additional goals: One is to strengthen the sense of security and sovereignty in the area. The other is to ease access to the Old City,” said Elkin.

The City of David is Israel’s largest ongoing archeological dig. For a decade, hundreds of archeologists and workers have been toiling underground to uncover the monumental 2,000-year-old Pilgrimage Road that led from the Pool of Siloam at the bottom of the hill to Herod’s Temple at its peak. Two millennia ago, during Judaism’s three pilgrimage festivals of Pesach, Shavuot and Sukkot, millions of Jewish pilgrims ascended in joy along the ancient path to reach Herod’s shrine.

Following the destruction of Jerusalem by the Romans in A.D. 70, the stepped street became buried under rubble. Over the centuries, the Palestinian neighborhood of Silwan grew up on top of the now-hidden pedestrian-only road. Excavating the underground path has meant buttressing the houses on top as rubble has been cleared away below.

“We still have approximately 100 meters (328.08 feet ) left [to excavate] to open the entire road for tourists,” said Ari Levy, director of excavations at the site for the Israel Antiquities Authority.

Discovered in 2004 after a sewage pipe burst in Silwan, the site has been under excavation by archaeologists under the direction of professors Roni Reich and Eli Shukron since 2013. While some residents have complained the dig was undermining their homes, Israel’s Supreme Court ruled the tunnel is safe and is being carefully supervised by a corps of engineers.

The road began at the Pool of Siloam, and the excavations there are the second great project now underway at the City of David. Originally built by King Hezekiah some 27 centuries ago, the pool collected the water of the Gihon Spring diverted by a snaking tunnel he burrowed under his capital. Herod enlarged and remodeled the holy ghat, which was surrounded by steps on three sides to facilitate the masses entering the water.

While Israelis and Jewish tourists will likely appreciate the site for the splendor of ancient Jerusalem, for Christians it has another meaning. It was here, in John 9:1-7, that Jesus miraculously restored the vision of a man born blind. Similarly, it was at the Gihon Spring that Mary washed out newborn Jesus’ diapers.

Jerusalem Mayor Moshe Lion said: “The Pool of Siloam in the City of David National Park in Jerusalem is a site of historic, national, and international significance. After many years of expectation, we will soon begin uncovering this important site and make it accessible to the millions of visitors and tourists who visit Jerusalem every year.”

Gil Zohar was born in Toronto, Canada and moved to Jerusalem, Israel in 1982. He is a journalist writing for The Jerusalem Post, Segula magazine, and other publications. He’s also a professional tour guide who likes to weave together the Holy Land’s multiple narratives.