Snow, Ice And Thunderstorms To Return To Interior Northeast

A far-reaching and dynamic storm will ignite the next round of severe weather across the southern United States this week
By Alex Sosnowski January 17, 2023
Facebook
Twitter
Linkedin
Email 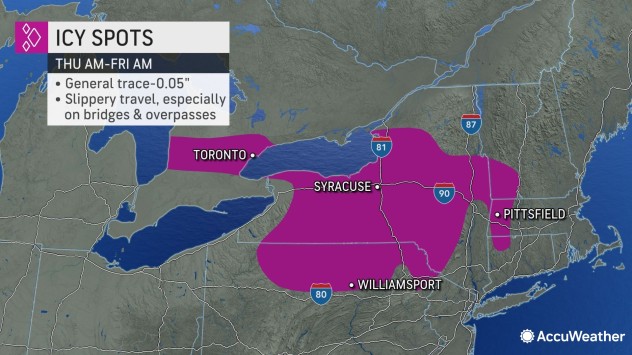 A far-reaching and dynamic storm will ignite the next round of severe weather across the southern United States this week, but it will also bring a variety of weather hazards to the Northeast late this week, including a dose of disruptive wintry precipitation for the northern tier, AccuWeather meteorologists say.

The extensive storm will meet just enough cold air to drop wintry precipitation that will disrupt travel in some interior areas from Thursday into Friday. However, areas that have been experiencing a snow drought are not likely to see that end with the upcoming storm. Rain is anticipated in the metro areas of New York City, Philadelphia, Washington, D.C.

Thunderstorms that poke northward from the Southern states could turn severe in parts of western Pennsylvania and Ohio Thursday, with strong wind gusts and power outages posing the greatest threat. Farther to the east, in much of the Interstate 95 zone, a period or two of rain with low cloud ceilings and areas of fog could slow motorists down and lead to airline delays.

Most of the problems with wintry precipitation will occur over interior portions of the Northeast.

From Thursday morning to Friday morning, the greatest concern for motorists and pedestrians will be a period of freezing rain and drizzle that can glaze streets, highways and sidewalks from parts of northern Pennsylvania and New York state to western portions of Connecticut and Massachusetts, as well as southern Vermont, AccuWeather Meteorologist Nicole LoBiondo said.

“Some untreated area bridges and overpasses could be especially icy,” LoBiondo warned.

Since the storm that tracks northeastward toward the Great Lakes Thursday will likely run into an atmospheric roadblock, it is expected to turn eastward Thursday night and Friday. This shift in the track will limit the routine warming process that would occur from upstate New York through northern and central New England.

Cold air will hold its ground over the northern tier and result in a substantial snowstorm.

A broad zone of 3-6 inches of snow is forecast from part of southern Ontario, Canada, to northern New York, Vermont, New Hampshire and Maine. Within this zone, pockets of 6-12 inches with an AccuWeather Local StormMax™ of 20 inches are most likely to occur in the Adirondack, Green and White mountains.

As New York City, Philadelphia and Washington, D.C., avoid snow from this storm, allowing the snow drought to continue, Boston has gotten some recent momentum going in the snowfall department.

Boston has picked up close to 5 inches of snow so far this season with the bulk of that snow coming from the nor’easter that hugged New England this past Saturday to Monday. Boston Logan International Airport picked up 3.5 inches of snow from the storm. However, the city is still well below average in terms of its seasonal snow average to date.

“Following rain during the main part of the storm from Thursday afternoon through Thursday night, just enough colder air may wrap around the backend [of the storm] Friday and Friday night to allow snow from interior New England to sweep toward the coast,” DeVore explained. If this scenario pans out, road conditions could become slippery around the city with substantial airport delays.

Getting accumulating snow to occur that far south could be a tall task Friday. The more likely zone for wintry conditions will be along the coast in New Hampshire and Maine.

New York City and areas farther south along I-95 will have to wait until later this month or perhaps later this winter for a round of snow. There is a chance that New York City could set a record for the longest number of consecutive days without measurable snow should storms packing the white stuff avoid the region through Feb. 6.

Early indications are that the next major precipitation event will bring primarily rain to the I-95 zone of the mid-Atlantic and southern New England from late this weekend to early next week, AccuWeather forecasters say.