A strong windstorm brought an onslaught of rain, high winds and snow to France during the second half of the weekend
By Allison Finch January 16, 2023
Facebook
Twitter
Linkedin
Email 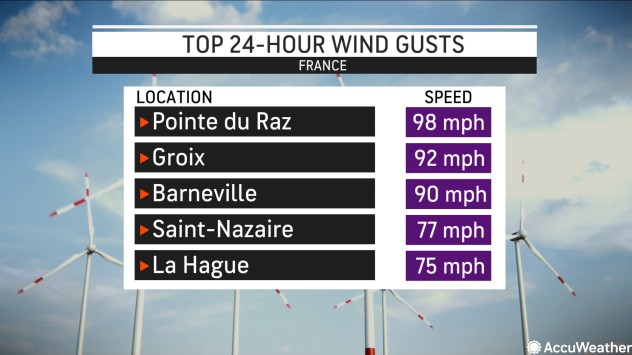 A strong windstorm brought an onslaught of rain, high winds and snow to France during the second half of the weekend, and its effects were still being felt on Monday. Thousands of households were without power, and some parts of the country were still under an orange alert, meaning that dangerous weather is expected.

According to AccuWeather Meteorologist Lauren Hyde, the area of low pressure that brought the unsettled weather to the country has been dubbed Storm Gerard by Météo France, the country’s official meteorological service.

As a result of the strong winds, 90,000 households were without power by Monday morning, France TV Info reported. Most homes without power were located on the western side of the country.

The SNCF, the state-owned railway company in France, reported disrupted services on Monday due to downed trees on the tracks in Pays de la Loire, Ile-de-France and Normandy, three regions of France located in the northern half of the country, AFP reported.

“The train stopped in the middle of the countryside,” one commuter told France TV Info Monday morning. “The controller told us that it was branches on the rails.”

In Pas-de-Calais, the heavy rain resulted in the Hem River overflowing. According to a report from France TV Info, the river reached a height of 6.10 feet (1.86 meters) on Monday.

Mabille said the water level on the Hem hadn’t reached this height since the floods in 2012.

In the higher elevations, snow and ice created treacherous travel for many.

As strong winds, threats of flooding and snow are still affecting a large swath of the country, Météo France still has numerous regions under an orange weather alert into Tuesday. People living in areas under an orange alert are advised to stay weather aware and updated with the latest forecast.

“While Storm Gerard is set to depart today, another round of heavy rain and high winds can be expected across much of France as a period of active weather is set to continue across the region, with rain and even snow not out of the question over the next couple of days,” Hyde said.