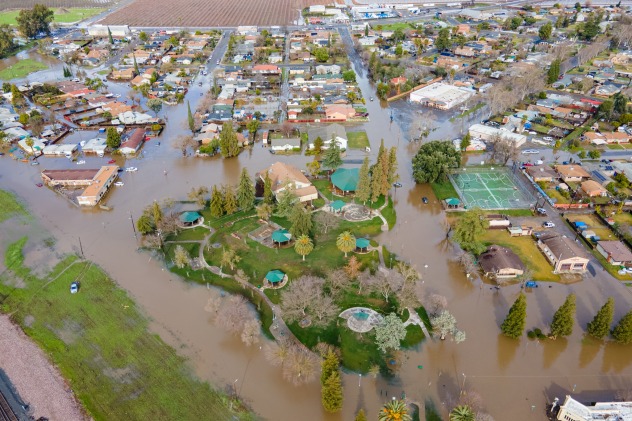 An aerial shot of Houlihan Park in Planada, a town in the Central California county of Merced. The challenges posed by the flooding won't be over. About 90% of the residents in the community are renters, and few are likely to have flood insurance. FACEBOOK/ACCUWEATHER

Parked at the small convenient market, Alejandro Martinez turned on his phone camera and continued to document the murky floodwaters on that had overrun the small Central California town by Tuesday evening.

“Planada’s underwater. Check on your people,” he warned in the video. The water was at least shin-deep, but it was enough to trap smaller cars and had prompted a mandatory evacuation order for the town earlier that day. While he and a few others had set out to help people escape the floodwaters, Martinez soon found another way to help his community recover.

Like many other locations across the state, the small town of Planada, located in Merced County, and its population of roughly 4,000 found itself in deep waters at the start of the week following the onslaught of storms that have slammed California since New Year’s Eve.

The storms came to a crescendo in the town when rising waters from the steady rainfall breached a nearby levee, prompting a mandatory evacuation order by Merced County Sheriff Vern Warnke on Tuesday morning.

“Emergency personnel are making direct contact with more than 4,000 individuals in the affected area today,” read the press release, adding that additional rainfall and heavy flows along the local waterways could cause additional flooding.

While Martinez lived in the city of Merced, just a few miles from Planada, he had grown up in the community and still had friends and family who lived in the area.

The call to evacuate spurred him into action.

Taking his truck and drone, he set out to help evacuate his family and others from the floodwaters and get a bird’s eye view of the extent of the flooding.

“While they were preparing [to evacuate] I put the drone up in the air, and that’s when I captured those images,” Martinez told AccuWeather National Reporter Jillian Angeline, adding he was at a loss for words when he saw the scenes from an aerial perspective.

The video quickly gained attention, the post on his small clothing business’s Instagram account amassing over 178,000 views. The aerial video showed cars sitting nearly submerged on roads that could otherwise be mistaken for rivers and homes standing as islands in flooded neighborhoods.

“It was gaining so much traction in the public eye,” Martinez said, adding that he began to feel a new responsibility to do something with the newfound publicity and help the town.

He found the answer as to how he could help through his startup clothing business, Planeteers209 — named after the nickname for residents of Planada combined with the area code.

“From this day forward, until further notice, all the proceeds, every single penny that’s made from the sale of any merchandise from Planeteers is going to be donated to the families directly impacted from the food, and we’re going to be buying water bottles, snacks, Gatorade, coffee, blankets, essentials like self-care items, and we’re going to be donating it to the families that are staying in the shelters that are displaced from the floods,” Martinez said.

He has also set up a fundraiser through the crowdfunding platform .