State Frank LaRose sent a letter to legislative leaders announcing that he is resubmitting to the Ohio General Assembly a measure.
By Nicole Fisher January 15, 2023
Facebook
Twitter
Linkedin
Email 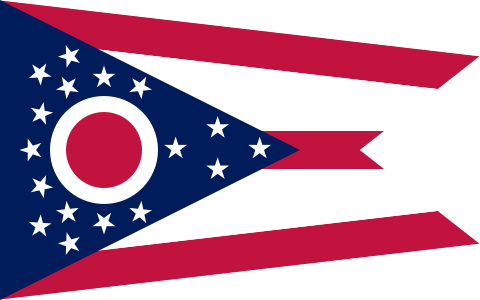 Flag of the state of Ohio. Ohio Secretary of State Frank LaRose resubmitted a measure to legalize recreational use of marijuana. STATE OF OHIO/BALLOTPEDIA

On Jan. 4, 2022, Ohio Secretary of State Frank LaRose (R) sent a letter to legislative leaders announcing that he is resubmitting to the Ohio General Assembly an indirect citizen-initiated measure to legalize the use of recreational marijuana for adults aged 21 and over.

The campaign Coalition to Regulate Marijuana Like Alcohol (CTRMLA) worked strenuously to put the legalization initiative on the November 2022 ballot, but procedural complications prevented that from happening. Activists turned in enough signatures to initiate the legislative review, but the timing of their initial submission was challenged.

CTRMLA’s lawsuit to force ballot placement was unsuccessful with respect to the 2022 election, but the state agreed to a settlement that meant they will not have to collect another round of initial signatures and that the initiative would be immediately retransmitted to the legislature at the start of the 2023 session.

“As stipulated in the Settlement Order, today shall be considered the date on which the German Assembly’s four-month period to consider the proposed law begins, as provided for in Article II, Section 1b of the Ohio Constitution, and no parties shall take any direct or indirect action in contravention of this re-transmission,” the Secretary of State wrote to lawmakers.

In Ohio, the state legislature will now have four months to consider the proposal. If the measure does not pass the legislature, it may appear on the ballot for Ohio voters on November 7, 2023.

Haren stated, “As we have always said, we intend to work with legislative leadership in good faith to legalize marijuana for all adults through the legislative process. If the General Assembly fails to act, however, we will place our proposal before Ohio voters this November, and it will pass.”

Recreational marijuana has been legalized in 21 states. Marijuana was most recently legalized statewide in Maryland and Missouri in 2022 by ballot measures in those states (measures in South Dakota, Arkansas, and North Dakota failed to pass in 2022). Petitions are also currently circulating in Florida and Nebraska to put the question to voters on the 2024 ballot.

Ohio voters may see the issue on their ballots in 2023, depending on whether the General Assembly passes the measure and the campaign collects a second round of signatures after the legislative period.

Initially, the Coalition to Regulate Marijuana Like Alcohol filed 206,943 signatures to the Secretary of State in December 2021. Of these signatures, 119,825 were found valid by Secretary LaRose on Jan. 3, 2022, but 13,062 more were needed. In Ohio, campaigns are given an additional week to collect more signatures. The campaign submitted 29,918 additional signatures on January 13, 2022, and the state legislature did not decide on the measure within the four-month window. Additionally, the committee became aware of conversations among legislative officials and the attorney general’s office pertaining to whether or not it submitted signatures in time, due to the interpretation of the Ohio Constitution regarding the signature deadline. This prompted the committee to file a lawsuit, and the settlement allowed for the submission of their collected signatures at the start of the 2023 legislative session rather than starting the process over again.

The last citizen initiative on the Ohio ballot was in 2018, a measure relating to drug offenses that was defeated by voters. From 1985 to 2022, 24 citizen initiatives appeared on the ballot in Ohio. Eight of those measures were approved and 16 were defeated.

Advocates behind an effort to legalize adult-use marijuana submitted additional voter signatures on Thursday to put their proposal before Ohio lawmakers.

The Coalition to Regulate Marijuana Like Alcohol turned in another 29,918 signatures to Secretary of State Frank LaRose after falling short earlier this month. The group submitted over 200,000 signatures as part of the initiated statute process, but LaRose’s office determined only 119,825 were valid.

Per state law, petitioners must gather 132,887 signatures from Ohioans in at least 44 counties, according to the Columbus Dispatch.