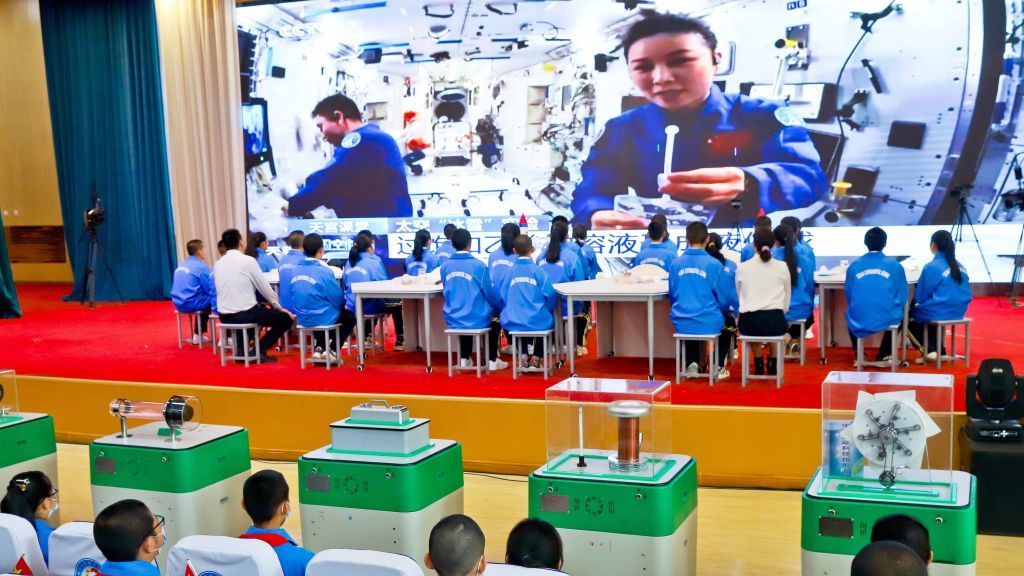 Students watch a televised lecture by the three astronauts on the Chinese space station Tiangong in a school in Zhangye in northwest China's Gansu province Wednesday, March 23, 2022. US and China in an effort to secure territory and resources on the Moon.  XUE LEI/FUTURE PUBLISHING via GETTYIMAGES

In a recent interview with Politico, NASA administrator Bill Nelson described the realities of a resurgent space race that pits the USA and China against one another in an effort to secure territory and resources on the Moon. While other experts have downplayed the chance of a lunar conflict the underlying issues remain very real.

Both the US and China have plans to send multiple missions to the Moon over the next decade, raising concerns about a possible standoff.

Yet there remains an opportunity, and an incentive, to avoid historic patterns of territorialism.

“The most critical time to set lunar exploration and settlement norms and policy is now, before actual physical presence,” said Colonel Hadfield, former Commander of the International Space Station (ISS) said, and now Chair of the Open Lunar Foundation — an organization devoted to creating a peaceful cooperative future on the moon.

“We need to collectively identify what is and will be valuable to us on and about the Moon, and work now to decide how best to protect and make them equable.”

At the center of that collective effort is the United Nations Office of Outer Space Affairs (UNOOSA) and the Committee on the Peaceful Uses of Outer Space (COPUOS) which meets to discuss advancing international agreements on, among other things, the use of lunar resources.

Chief among those international agreements is the Outer Space Treaty, which explicitly bars nations from making territorial claims.

However, given the stakes, the potential for gain and the relative vacuum of enforceable international law, there is a real concern that nations might simply ignore treaties and diplomatic processes and instead lay claim.

“We need the voice and influence of multiple nations’ organizations – federal, military, civilian, UN, and advisory groups like the Open Lunar Foundation – to give us all the best chance of doing what is best,”  Colonel Hadfield said.

Open Lunar has been working directly with NASA, the US and other governments, the UN, and global academic institutions including those in China, to lay the foundations for common ground.

One project emerging from this collaboration is the Breaking Ground Trust — an experiment demonstrating the management of lunar resources, that aims to develop policies and practices which can be adopted by a wide variety of stakeholders.

It is one of a number of efforts emerging in the US and abroad to try and proactively feel out a way forward that avoids repeating the mistakes of the past, while drawing inspiration from recent examples of collaboration.

“The International Space Station is a form of off-world settlement that provides a potential paradigm for the Moon; multinational, cooperative, forged out of a Cold War, with a deliberately different set of laws called the Crew Code of Conduct. It shows what is possible,” said Hadfield.

Cooperation might not just be possible, it might also prove critical, even unavoidable, to all parties. Space is, after all, not an easy place to be, and in extreme environments collaboration becomes more important than ever.

What’s more, the US and China are not the only players. South Korea recently returned images from its first lunar mission, and Russia, India and the European Space Agency all have missions planned for 2023.

«Previous Post
Twitter Probed Over Users’ Personal Data Leaks»Next Post
Tesla Sharply Lowers EV Prices In US: You Can Now Own A Model 3 For Little Under $36,500