Stargazers May Soon Catch A Rare Glimpse Of A Green Comet

The stargazers are in for a treat as a rare green comet is expected to appear in the winter sky
By Brian Lada January 12, 2023
Facebook
Twitter
Linkedin
Email 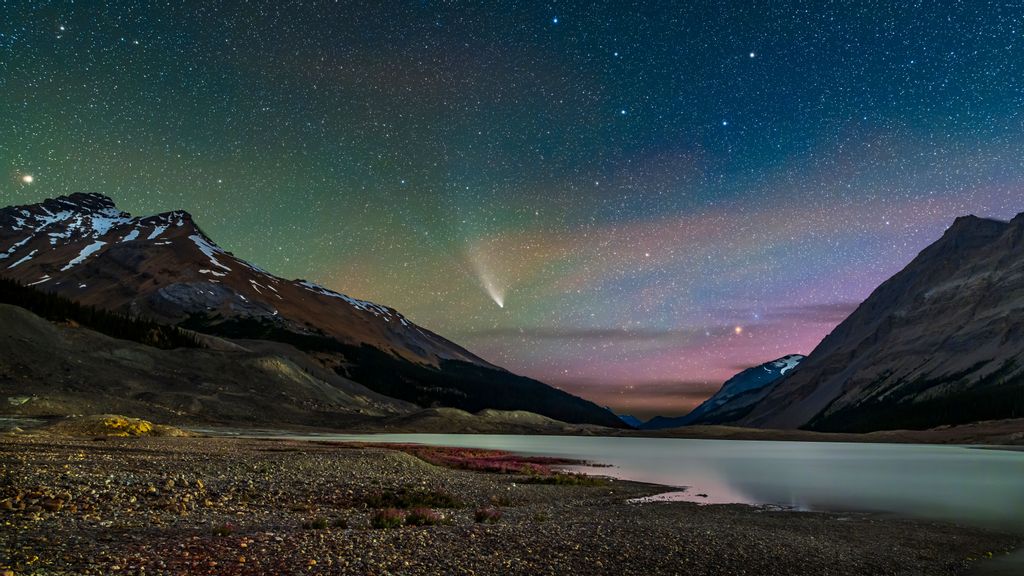 Comet NEOWISE (C/2020 F3) from the Toe of the Glacier parking lot, looking north over Sunwapta Lake, formed by the summer meltwater of Athabasca Glacier in Columbia Icefields (Jasper National Park, Alberta) on Jul 27, 2020. A similar sight is expected for all the stargazers this year in the month of February. (ALAN DYER/GETTY IMAGES)

There are many great astronomy events to look forward to in 2023, but a rare celestial visitor that will light up the winter sky is already generating a lot of hype.

“If C/2022 E3 has ever passed through the solar system before, it would have last been seen in the sky more than 10,000 years ago,” says Jon Giorgini, a senior analyst at NASA’s Jet Propulsion Laboratory.

Celestial sleuths at the Zwicky Transient Facility (ZTF) in Southern California were the first to detect the comet on March 2, 2022, and the object has been growing brighter since its discovery. The latest observations suggest that it could become visible to the unaided eye as it dashes past the Earth in the coming weeks.

“This comet isn’t expected to be quite the spectacle that Comet NEOWISE was back in 2020,” NASA said. “But it’s still an awesome opportunity to make a personal connection with an icy visitor from the distant outer solar system.”

The comet will look like a fuzzy star with a green tint rather than a bright ball of light with a dramatic tail stretching across the night sky. However, even at its brightest, there is a chance that folks will still need a telescope to see it.

“Comets are notoriously unpredictable,” NASA explained, “but if this one continues its current trend in brightness, it’ll be easy to spot with binoculars, and it’s just possible it could become visible to the unaided eye under dark skies.”

Only people in the Northern Hemisphere will be able to see the comet in the night sky, but looking for it may require losing sleep as it will only appear above the horizon during the second part of the night. Looking for the faint comet without a telescope also requires being in an area far from light pollution.

On Jan. 12, stargazers should look for the comet in the northeastern sky in the hours before daybreak between the bright stars Arcturus and Vega. The comet will rise above the horizon by around 1 a.m., local time, but it will be easier to find late in the night as it will appear higher above the horizon.

The celestial vagabond will drift across the night sky throughout January, eventually meeting up with the constellation Ursa Minor, also known as the Little Dipper. The constellation will serve as a reference point, making it easier to spot Comet ZTF during the final nights of January.

Comet ZTF will fly past the Earth on Feb. 1, but at its closest approach, it will still be more than 26 million miles away from the planet, according to EarthSky. This is more than 100 times farther away than the moon.

Although the comet is predicted to be around peak brightness when it makes its closest pass by the Earth, the easiest time to see it will be during the second weekend of the month as it passes incredibly close to another object in the night sky.

“If it’s your first attempt to locate a comet, try on February 10, 2023, when the comet appears extremely close to Mars,” EarthSky explained on its website.

EarthSky added that taking pictures of the night sky with an exposure of 20 to 30 seconds will allow photographers to capture images of the comet even if they cannot see it with the naked eye. Anyone trying to take a snapshot of the comet with long-exposure photography should use a tripod to keep their camera steady.

Comet ZTF will start to fade away during the second half of February as it moves farther away from the Earth and the sun, making it more difficult to find, even with a telescope.

It could end up being the most notable comet of 2023 as many other comets visiting the inner solar system this year are not predicted to shine as bright in the night sky, according to Star Walk.