Snow, Ice And Rain To Create Travel Headaches In Midwest And Northeast

As it moves eastward to the Midwest and Northeast this week, a coast-to-coast storm will bring a variety of meteorological threats
By Alex Sosnowski January 12, 2023
Facebook
Twitter
Linkedin
Email 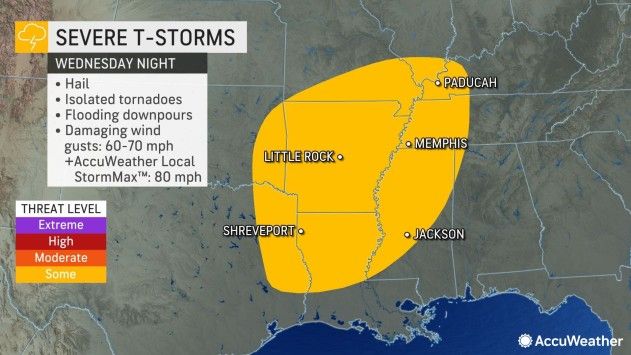 A coast-to-coast storm will bring a variety of weather hazards as it shifts eastward to the Midwest and Northeast late this week, AccuWeather meteorologists warn. Heavy rain and wind will be the most ubiquitous troublemakers, threatening a slew of travel delays, and the storm will also have a wintry side with the potential for heavy snow in some locations across the northern tier. In between the rain and snow areas, an icy mix could create slick conditions.

The upcoming storm will be much stronger than an early-week storm that brought spotty snow and a wintry mix to parts of the Ohio Valley, central Appalachians and coastal Northeast from Sunday to early Monday. Plus, it will tap into more moisture from the Gulf of Mexico and the Atlantic Ocean – enough so that severe weather will be a concern as the system rolls through across parts of the southern United States.

Before causing its share of headaches across the central and eastern U.S., the storm system was wreaking havoc in California early this week, unleashing torrential rain, flooding, power outages and heavy mountain snow on Monday.

As that moisture pivots northward into progressively colder air during Wednesday night, pockets of sleet, freezing rain and snow will develop in northeastern Kansas and northern Missouri, as well as across portions of upstate New York and New England.

Areas in northern New England and adjacent areas in Ontario and Quebec, Canada, stand the best chance of receiving a significant amount of snow on the order of several inches to a foot or more (10-30 cm (0.98 feets) (0.98 feet s) (0.98 feet)).

Enough snow or an icy mix can occur to make roads slippery for a time across interior parts of New England and parts of New York state later Wednesday night to Thursday morning, including along portions of the New York Thruway, I-87 and I-91.

Temperatures may fluctuate throughout the storm and changes of 1-2 degrees Fahrenheit could account for vast differences in snow and ice accumulations — and also play a role in how long wintry conditions persist in some locations.

One of several major cities and travel hubs forecasters will be keeping an eye on is Chicago.

“Since the storm is likely to slide to the south and east of Chicago, there may be just enough cold air to allow one or more periods of snow,” AccuWeather Meteorologist Matt Benz said.

One period will occur on the storm’s front side, while the other may occur as the storm is moving away.

“Since Chicago will be in the zone where both snow and rain can fall at a heavy rate for a time, it is possible for several inches to pile up from Thursday afternoon to Thursday evening if precipitation is all snow,” Benz said. “It is also possible for frequent snow showers to develop off Lake Michigan on Friday.”

In both cases, roads could be slippery due to wintry conditions around the Windy City.

The timing of that potential snow and slippery conditions, especially on Thursday, could play havoc with the evening rush hour and air travel coming into and out of Chicago, including at O’Hare and Midway International Airports.

Farther to the east, “it appears that the bulk of the precipitation will be in the form of rain for the Detroit area, but it may turn over to a heavy, wet snow for a couple of hours later Thursday evening,” AccuWeather Senior Meteorologist Brett Anderson said.

As the storm continues to strengthen Thursday night, there will be an expanding area of moderate to heavy snow from northeastern Ontario through far northern New England into Friday morning.

Farther south, the storm will bring mostly rain to vast stretches of heavily traveled interstates, including I-80 and I-95.

“This will be a rainstorm for the I-95 corridor Thursday night into early Friday with gusty winds,” Anderson said. The combination of rain and wind can lead to many travel problems on the roads and delays at airports.

A secondary storm may develop along the Atlantic coast, just as colder air sweeps in at the end of the week, allowing the potential for winter precipitation, including for some major cities in the Northeast that are pacing well behind normal for seasonal snowfall to date.

If the storm forms quickly enough and tracks near the coast, it could result in another period of rain along I-95 for a time Friday night. However, should the storm strengthen at a fast pace, it could draw in just enough cold air to produce a stripe of snow from near the Hudson Valley of New York to New England, perhaps including New York City and Boston, on Friday night.

A return of chilly air will be enough to bring some snow showers to a broad area from Michigan to the mountains of Tennessee, North Carolina, Virginia, West Virginia, Maryland, Pennsylvania and western New York, regardless of any secondary storm forming, from Friday to Saturday. Motorists may encounter slippery conditions and poor visibility.

While a major outbreak of severe thunderstorms and tornadoes is not expected, enough warm and humid air will flow northward from the Gulf of Mexico as jet stream energy digs into the region. Both of those factors will come together to trigger severe weather in parts of the Southern states starting Wednesday night and continuing into Thursday evening.

The threats include all modes of severe weather ranging from flash flooding and powerful wind gusts to hail and a few tornadoes in portions of the interstate 10, 20 and 40 corridors.