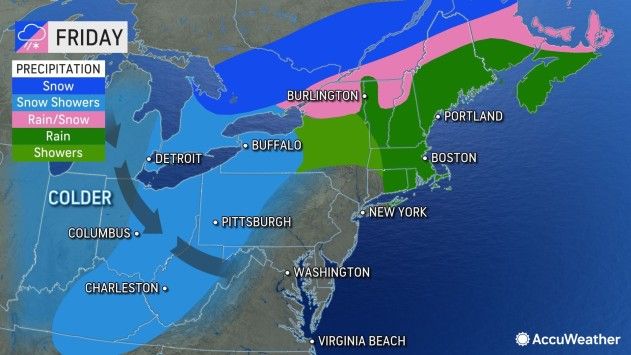 Snow showers could make some roads slippery around Chicago and Indianapolis Thursday night and Friday. During the same time, snow showers are likely to extend well to the south to portions of eastern Kentucky and the mountains in eastern Tennessee and western North Carolina, forecasters say. COURTESY/ACCUWEATHER

Travel disruptions across parts of the Midwest and interior Northeast are likely as a cross-country storm taps into colder air and drops accumulating snow as well as a wintry mix before the end of the week, AccuWeather forecasters warn.

With snow in the Northeast likely to be limited to the central Appalachians and northern New England through much of next week, the snow drought will continue along the Interstate 95 corridor.

New York City has gone 307 days since it last received measurable snow, which is one of its longest snow droughts on record. The Big Apple’s current record of 332 days was set back in 2020.

Farther west and north, wintry travel will unfold in the short term.

Just enough snow and/or a wintry mix will lead to some slippery roads from parts of northern Pennsylvania and New York state to northern and central New England for a time late Wednesday night and Thursday.

The track of a storm and limited cold air will lead to a rather narrow zone of 1-3 inches of snow from central and northern Kansas Wednesday night to southeastern and central Michigan and northern Ohio Thursday night, AccuWeather Meteorologist Brandon Buckingham said. In much of this swath, the storm will begin as rain before transitioning to snow. During this time, accumulating snow is likely to stay north of St. Louis.

“As the storm pushes to eastern Canada, some lake-effect snow will become intertwined with trailing jet stream energy that can lead to some bands of moderate snow, especially in northeastern Ohio, northwestern Pennsylvania and western New York from Thursday night to Friday,” Buckingham said. In this area, it is possible for local amounts to approach 6 inches of snow or more with slow and slippery travel conditions.

A southward dip in the jet stream, combined with cold air and lingering moisture, will produce intermittent snow and locally heavier snow showers well south and west of any lake-effect interaction in the wake of the main storm.

In situations similar to this, the sudden drop in visibility and slushy conditions can raise the risk of pileup collisions on area highways. Some major thoroughfares where motorists could encounter dangerous locally heavy snow showers include interstates 40, 70, 77, 79, 80 and 81. The slushy conditions on the roads may only be temporary but can occur even when car thermometers register above-freezing temperatures.

“Accumulations in parts of the Ohio and Tennessee valleys will generally be a coating or less,” AccuWeather Senior Meteorologist Brett Anderson said. “But over the higher ground in the Appalachians pockets of 1-3 inches can occur with a few of the high spots in West Virginia potentially approaching 6 inches.”

The heaviest snow from the storm will focus on parts of Ontario and Quebec, Canada, where 12-18 inches (30-45 cm (1.48 feets)) will pile up in some areas. The major Canadian cities of Ottawa and Quebec City are likely to pick up 8-12 inches (20 to 30 cm (0.98 feets)) of snow with much lower amounts in Montreal, due to rain and a wintry mix during a large portion of the storm. It is possible that Toronto escapes with a couple of inches (6 cm) of snow or less.

The push of colder air into the end of the week and into the weekend will be nothing unusual for mid-January, but some locations from the Central to the Eastern states may experience a temperature drop of 15-25 degrees Fahrenheit from one day to the next.

“The mild interlude that precedes the storm this week with its snow in the Midwest and interior Northeast and severe weather in the South may provide an opportunity for people to take down outdoor holiday decorations if they have not yet done so,” AccuWeather Senior Meteorologist Bill Deger said.

For snow lovers in the areas of the Northeast that haven’t received any significant accumulations this season, there could be some reason for optimism in the coming weeks.

AccuWeather’s team of long-range forecasters says it is possible that toward the latter part of the month and into early February, as colder air expands with more staying power from Canada into the Central and Eastern states, storms may begin to track in such a way to allow opportunities for accumulating snow in the I-95 corridor of the Northeast and perhaps the interior Southeast.