Oldest Weapon Heads Ever Found In The Americas Uncovered In Idaho

It has been discovered that the oldest weapon heads ever discovered in the Americas date back 16,000 years
By Stephen Beech January 12, 2023
Facebook
Twitter
Linkedin
Email 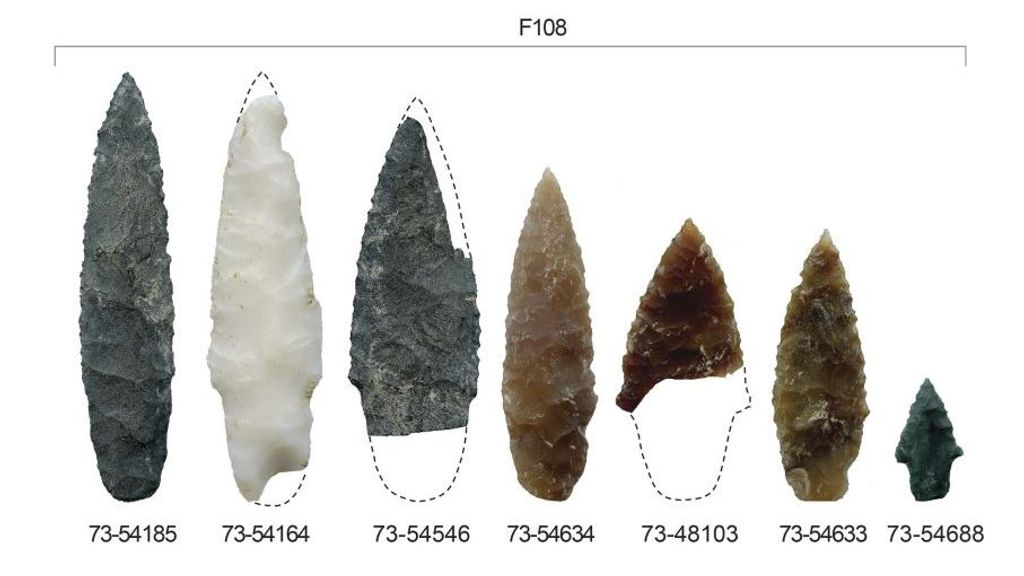 Spearhead artefacts excavated from a pit feature at the Cooper’s Ferry site in Idaho. The slender projectile points are characterized by two distinct ends, one sharpened and one stemmed, as well as a symmetrical bevelled shape if looked at head-on. LOREN DAVIS/SWNS

The oldest weapon heads ever found in the Americas – dating back 16,000 years – has been uncovered. The projectile points discovered by archaeologists in Idaho are around 3,000 years older than any found before. The latest findings were published in the journal Science Advances.

Scientists say they were likely attached to darts, rather than arrows or spears, and, despite the small size, they were “deadly” hunting weapons.

The 13 full and fragmentary projectile points – “razor sharp” and ranging from about 0.5 to two inches long – are from roughly 15,700 years ago, according to carbon-14 dating.

The Salmon River site where the points were found is on traditional Nez Perce land, known to the tribe as the ancient village of Nipéhe.

Leader of the dig group Professor Loren Davis, of Oregon State University (OSU), said: “From a scientific point of view, these discoveries add very important details about what the archeological record of the earliest peoples of the Americas looks like.

“It’s one thing to say, ‘We think that people were here in the Americas 16,000 years ago;’ and another thing to measure it by finding well-made artifacts they left behind.”

Previously, Prof Davis and other researchers working at the Cooper’s Ferry site had found simple flakes and pieces of bone that indicated human presence about 16,000 years ago.

But he said the discovery of projectile points reveals new insights into the way the first Americans expressed complex thoughts through technology at that time.

Prof Davis said the points are revelatory not just in their age, but in their similarity to projectile points found in Hokkaido, Japan, dating from 16,000 to 20,000 years ago.

He says their presence in Idaho adds more detail to the hypothesis that there are early genetic and cultural connections between the ice age peoples of North East Asia and North America.

Prof Davis said: “The earliest peoples of North America possessed cultural knowledge that they used to survive and thrive over time.

“Some of this knowledge can be seen in the way people made stone tools, such as the projectile points found at the Cooper’s Ferry site.

“By comparing these points with other sites of the same age and older, we can infer the spatial extents of social networks where this technological knowledge was shared between peoples.”

He says the slender projectile points are characterized by two distinct ends, one sharpened and one stemmed, as well as a symmetrical beveled shape if looked at head-on.

Prof Davis says they were likely attached to darts, rather than arrows or spears.

“You can hunt any animal we know about with weapons like these.”

Prof Davis says the discoveries add to the emerging picture of early human life in the Pacific Northwest, adding: “Finding a site where people made pits and stored complete and broken projectile points nearly 16,000 years ago gives us valuable details about the lives of our region’s earliest inhabitants.”

The newly discovered pits are part of the larger Cooper’s Ferry record, where Prof Davis and colleagues have previously reported a 14,200-year-old fire pit and a food-processing area containing the remains of an extinct horse.

Scientists have found and mapped more than 65,000 items, recording their locations to the millimeter for precise documentation. All excavation work has been completed, and the site is now covered.

The team has also worked closely with the Nez Perce tribe to provide field opportunities for tribal youth and to communicate the findings.