He wanted to be a performer since the age of 10 and spends $12K on outfits, singing lessons to become Elvis impersonator.
By Debbie Luxon January 12, 2023
Facebook
Twitter
Linkedin
Email 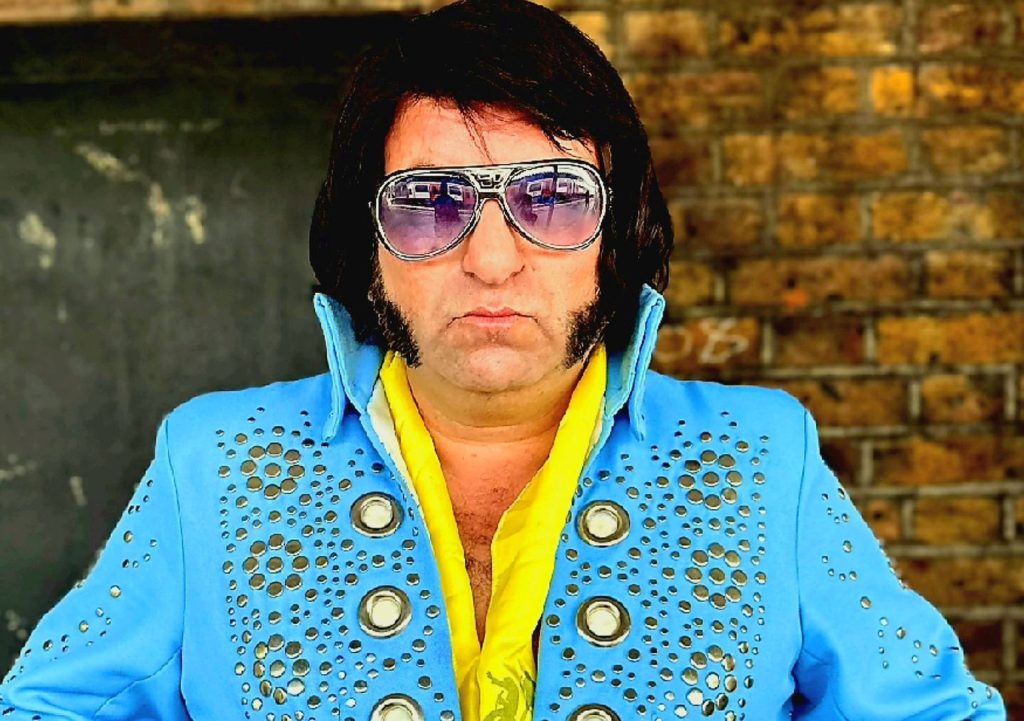 Former bus inspector David Black, 52, spends $12k of his money on Elvis Presley outfits and singing lessons to fulfill his dream of becoming an impersonator. Black dreamed of being Elvis at the age of 10. DAVID BLACK/SWNS TALKER

More than just blue suede shoes, a lot of cash has left the building. A former bus inspector in the United Kingdom has spent £10,000 ($12,000 USD)  on Elvis Presley outfits and singing lessons to fulfill his dream of becoming an impersonator.

David Black, 52, decided to leave a life on the buses to pursue his dream after becoming miserable during the Covid pandemic and then being offered voluntary redundancy. His ticket out of working with the travel company Arriva came in the form of a substantial redundancy package.

After leaving his job as a bus inspector in 2021 he used the money to invest in his business as an impersonator of the King of Rock ‘n’ Roll.

Though he hasn’t yet made back the £10k ($12,150 USD) from his impersonator work, he says he’s happier than ever and never going to quit.

“I’ve wanted to be a performer since the age of 10. I wanted the Dave Black show in the theatres. I never lost that passion for the stage, Black said, “During Covid-19, I suffered with my mental health. Now I’m 100 percent living my dream. I will carry on doing this for however long I’m on this planet.”

Thankfully,  his wife Lynn is a fan of Presley and watched his movies as a child. On taking the plunge, he said: “I really had to believe in myself. I couldn’t sing, so needed singing lessons.

“When you lay out a lot of money like that, you’ve got to make sure you’re going to get it back.”

Black bought a year of singing lessons in 2021 and spent thousands on custom-made bedazzled pleather suits, costing £1,700 ($2,000 USD) each. He had to learn how to hit the right notes as well as drop his Essex accent in place of the singer’s southern drawl.

Dave had the idea to become an Elvis Presley impersonator after visiting Las Vegas and becoming inspired. He started moonlighting as an Elvis on his days off in 2018. He had a good line of shows booked just before March 2020, when the pandemic hit and all entertainment venues closed indefinitely.

“I didn’t know whether to laugh or cry, I thought they were pulling my leg with this biblical plague that had come from nowhere” he said, “It really messed me up mentally. It affected me badly, but I never gave up. grabbed my mic and sang at home and entertained people online.  I decided to take redundancy then, I’d worked on the buses for 20 years and I had to believe in myself.”

He now works as a Tesco delivery driver to support his Elvis work but with shows coming in most weeks, he’s living his dream.

David’s favorite song to sing is ‘The Wonder of You,” which is apt as he thinks.

“When I was a kid, I used to go onstage and win talent contests for impersonations, You never lose that stage presence.”