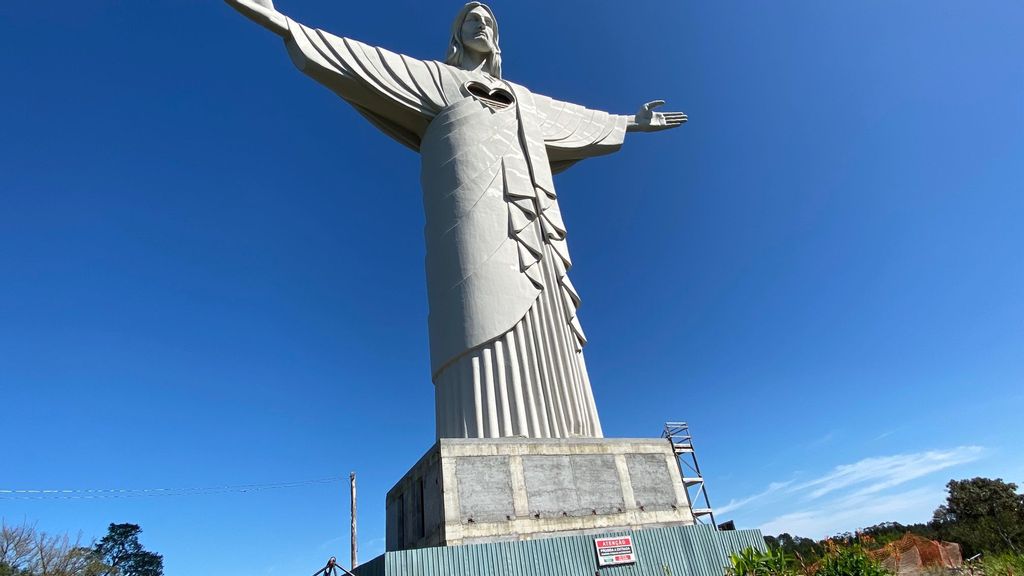 The statue of Christ Protector is considered the largest Catholic sculpture in the world. The statue was completed in 2022. LUCIANO NAGEL/ZENGER NEWS

The statue of Christ Protector, in the city of Encantado, located in Rio Grande do Sul State, Southern Brazil considered the largest Catholic sculpture in the world with its 43.5 metres (142.71 feets (43.50 m)) height, including the pedestal. It has already received more than 130,000 Brazilian and foreign tourists from 40 countries, since May 2021 to December 31, 2022 This information comes from the businessman and vice-president of Friends of Christ Organization, Robison Gonzatti.

The construction began in July 2019, atop the Morro das Antenas, 1,300 feet above sea level. The place is considered one of the postcards of Encantado city, which has just over 23,000 inhabitants and has a beautiful panoramic view of Garibaldi Lagoon and Taquari Valley. In total, around US$ 800,000 was raised in donations.

The creator of the audacious project to build the biggest Christ in the world was former mayor Adroaldo Conzatti. At the time, he met with residents and businessmen in the region to find ways to raise funds to build the structure and turn it into a new tourist hub in the municipality. After much debate with society, a task force was created with the sale of raffle tickets and requests for voluntary donations. The impact of Christ Protector in the Encantado city took on such a large and unexpected dimension that, little by little, people from other countries began to make money donations so that the works could begin.

The proposal was to build the image of a Christ larger than Christ the Redeemer, in Rio de Janeiro, 38 meters high (counting the pedestal) without raising public funds. Mayor Conzatti died in March 2021, a victim of coronavirus. Thus he did not live to see the completion of the project.

The Christ Protector is different to other statues around the world, like the frame of a heart, which will serve as a viewpoint.

”The interior access to the viewpoint, which will be illuminated in redlights at night, is still under construction, as the installation of glass and elevator is still missing. The installation is expected to be completed by the end of this year, said Robison Gonzatti. The ticket to climb in the heart will be charged separately though that value has yet to be determined.

Who created the statue?

The sculpture weighs around 1,700 tons and has about the size of a 14-story building. To get an idea of &ZeroWidthSpace;&ZeroWidthSpace;the size of the work, just the face of Christ, which took 3 months to sculpt, weighs six tons. The majestic statue was created by Northeastern plastic artist Genésio Gomes de Moura, 67, known as “Ceará”, and his son Markus Moisés Rocha Moura, 42. At the time of construction, the father had to take time off work and passed the task to his talented son, who lives in Ouro Fino city, countryside of Minas Gerais State, in the Southeastern region of Brazil.

At the top of the hill, around the feet of Christ Protector, parking lots, shops, restaurants, a chapel and public restrooms will be built to better serve tourists. Also, just before accessing the statue area, the Jardim do Acolhimento will be built. According to the mayor of Encantado, Jonas Calvi, the new environment will have a space for contemplation next to native forest, playground and elevated walkways with viewpoints to the Taquari Valley.

The future garden will be located in an area of &ZeroWidthSpace;&ZeroWidthSpace;30 thousand square meters. ”The proposal is to create a unique environment to welcome tourists before arriving at Christ, without interfering with nature. The space invites visitors to reflect, to breathe the fresh air, enjoy the green of the forest and the singing of the birds,” said mayor Jonas Calvi. The works should start from January 2023 and the budget is US$ 562,000 that will be paid by the city hall. The access road to the hill is under construction and will soon receive asphalt. Along the nearly 2 miles route, there will be a bike path and space for walking. The funds will come from the city hall and the state government.

According to Rafael Fontana, who is part of the Friends of Christ Organization, despite not having its surroundings completed, the mega sculpture can be visited by tourists during weekends, always on Saturdays, Sundays and holidays, from 9 am to 5 pm. ‘’The donation costs US$ 5.60 and the money raised will be invested to continue the works of Christ himself. Seniors over 60 pay half price and children under 12 pay no charge. Residents of Encantado city have a 50% discount by showing their SUS card’’, said Rafael.