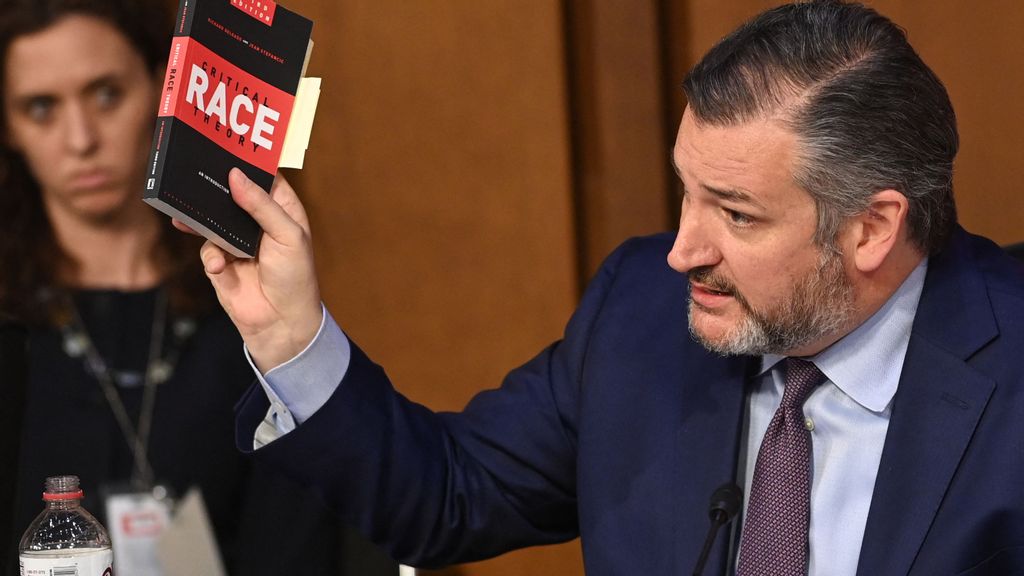 US Senator Ted Cruz (R-TX) holds a book titled Critical Race Theory while speaking during the confirmation hearing for Judge Ketanji Brown Jackson before the Senate Judiciary Committee on her nomination to be an Associate Justice on the US Supreme Court, in the Hart Senate Office Building on Capitol Hill in Washington, DC, on March 22, 2022. It's claimed that CRT has attacked Zionism and the state of Israel. SAUL LOEB/JNS

“As the result of a generous grant from a private foundation, TDP is extending its reach, and hiring additional lawyers to enable it to bring this fight to more courtrooms,” said TDP’s Legal Director Lori Lowenthal Marcus.

“We have brought a legal challenge in federal court in California challenging ‘Liberated Ethnic Studies’—which adopts the full complement of Critical Race Theory’s attack on Zionism, the goal of which is to teach all American public school children the canard that such attacks are not antisemitic because ‘Zionism and Judaism are two separate things.’ As a result of this very generous gift, we are now hiring more litigators to help us expand this fight dramatically,” she said.

TDP was founded by Harvard Law School Professor Jesse M. Fried and provides legal assistance on a pro bono basis to Jewish or pro-Israel individuals who are being discriminated against in educational settings.

“Zionism has long been demonized on the far left—at least since the U.N.’s 1975 Zionism is Racism resolution, and then by the festival of antisemitism at the Durban conference in 2001 [Durban I],” Marcus continued.

“Those attacks have crept into the mainstream of the US conversation on race, through Critical Race Theory, which denounces the creation of the State of Israel as an exercise in land theft by white colonialists, and the actions of the Jewish state to defend all of its citizens—Muslims and Christians as well as Jews—as nothing more than genocide, apartheid and ethnic cleansing. Now these libelous attacks on the Jewish commitment to Zion are being injected into public school curricula in the guise of ‘anti-racism,’ through the vehicles of Liberated or Critical Ethnic Studies.”

“Though the flames of antisemitism continue to be fanned, most American Jews thought that was a hatred from which they and their children would be spared,” she said. “But as Critical Race Theory and even physically violent attacks on them proliferate, Jews are slowly awakening to the need to not just complain about but to defeat this effort to teach children to hate and to oppose the existence of a sovereign Jewish state in the land of Israel. [We have] been litigating cases since 2016 challenging the efforts of Israel’s enemies to install hatred of the Jewish yearning for national liberation into the American educational canon.”

In light of the new grant, TDP is creating a new legal defense fund modeled after other successful civil rights law firms dedicated to the protection of minority rights.

“Our model for TDP is the NAACP Legal Defense Fund,” said TDP President Jerome Marcus. “Led by Thurgood Marshall and other brilliant and deeply committed lawyers, these people worked for many decades to conduct a well-thought-out and meticulously executed plan to use the Constitution’s grant of equal protection to assure civil rights for their constituency.

“America’s civil rights laws have long been used by other minorities, and the American Jewish community has supported those campaigns with great commitment. But with rare exceptions, the Jewish community here has not used these laws for their own protection. With this grant, we can begin to make TDP into the civil rights law firm for American Jews.”

As Gov. Ron DeSantis targets “trendy ideology” in higher education, his administration is asking state colleges and universities for information about resources they are putting into activities related to diversity, equity and inclusion, and critical race theory.

DeSantis has made the fight against critical race theory – which is based on the premise that racism is embedded in American institutions – a linchpin of his education and political agenda..

Marcus went on to describe how anti-Jewish attacks on college campuses have increased due to the proliferation of Critical Race Theory.

DeSantis has repeatedly clashed with Democratic lawmakers and unions representing professors and teachers over his education initiatives.

Marcus said that “the advent of Critical Race Theory and its use against the Jewish commitment to Zionism must be a wake-up call for American Jews who need to understand the imperative to protect themselves—and especially their children—from the use of this ideology in public schools and elsewhere because it teaches Jew-hatred and incites violence.”

Proponents of the Critical Race attack on Israel point to American Jews who denounce Israel to buttress their claim that Zionism is wholly separate from Judaism. Therefore, they insist, it’s within the realm of civilized debate and is not antisemitic to want the Jewish state to be destroyed, and to proclaim that Jews’ commitment to that state is not the expression of a religious belief but is itself an act of racism.

“These attacks prey on ignorance about the content of Judaism—its books, its calendar, and its customs,” said Marcus. “Everything from our daily prayers to our breaking a glass at the end of Jewish weddings is linked intimately with the Jewish yearning for Jewish sovereignty in the land of Israel. That’s why attacks on the idea of Zionism are attacks on Jews’ sincerely held religious belief. And publicly funded attacks on sincerely held religious beliefs, like publicly funded attacks on Jewish ethnicity and Israeli nationals, and like attacks on Blacks, Hispanics, Asians or any other ethnic minorities, are flat out against the law.”

Marcus said that the grant will also enable the non-profit public interest law firm to build the infrastructure it needs to protect Jewish civil rights.

“One of the tools often used by the enemies of Zionism is stealth,” she said. “They instruct public school teachers who indoctrinate students with hatred of Israel to do so ‘under the radar’ and ‘behind closed doors,’ so parents and school administrators can’t find out what’s happening. We’re now able to flush out and expose the malevolent antisemitic material these people are sneaking into public schools. And when Jewish parents and other Jews see what’s being done, they will rise up, and we will prevail. Because we must.”

Senator Ted Cruz quoted the Rev. Dr. Martin Luther King Jr.’s dream of a world where children would be judged “not by the color of their skin but by the content of their character” — before sharply questioning Judge Jackson about her views on critical race theory.

He held up two books by Ibram X. Kendi that he said had been assigned or recommended at a school where she is on the board of trustees, describing their contents as “the exact opposite” of Dr. King’s famous “I Have a Dream” speech.

“Are you comfortable,” he asked, “with these ideas being taught to children?”

It was a salvo aimed squarely at today’s pitched battles over critical race theory, a once obscure academic discipline that has emerged as a potent political weapon for the right. From the floor of the Senate to the report of the Trump administration’s 1776 Commission, it has been painted as the antithesis of the colorblind America that Dr. King supposedly wanted to create according to the NY Times.