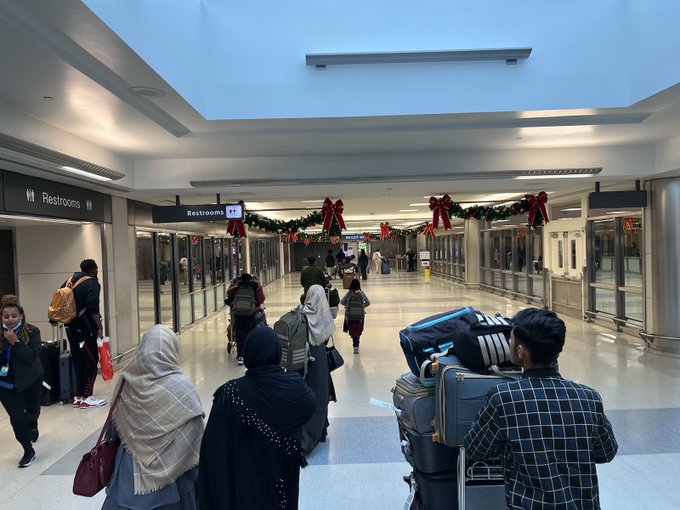 A group of lawful permanent residents (LPRs) rescued from Afghanistan walk on airport. Project Dynamo has rescued a Texas family who was hiding from the Taliban for more than a year in an operation titled Slingshot 11. PROJECTDYNAMO

Efforts continue to rescue Afghani soldiers and translators who worked along side American forces prior to the withdrawl of NATO forces in Afghanistan. A group of lawfully permanent residents (LPRs) of the U.S. finally can be rescued from the clutches of the Taliban in Afghanistan. The family was among seven LPRs rescued in an operation titled Slingshot 11 under Project Dynamo. Project Dynamo announced that successfully operation on Tuesday in a news release.

Formerly, seven American LPRs who had been hiding in eastern Afghanistan since August 2021, when the Taliban took control of the country after the U.S. military withdrawal.

Family member of seven American LPRS who had been hiding contacted Project Dynamo to request assistance. Dynamo’s network of human infrastructure on the ground in Afganistan and around the world mobilized to begin the required groundwork to complete the complicated rescue.

Certain details of the rescue are being withheld due to operational security. The airplane carrying those who were rescued exited Afgan airspace Tuesday morning.

“Every rescue and operation is different, and this one was yet another unique challenge. It required safe houses, vehicles, airplanes, medical personnel and extensive operational testing and planning to successfully mitigate dozens of Taliban-controlled checkpoints along the route, allowing Project Dynamo to get the family safely out of Afghanistan,” said Bryan Stern, who coordinated the mission on the ground in the United Arab Emirates and was escorting the LPRs back to the U.S. on Tuesday.

Operation Slingshot 11 was executed in the wake of the failure of the Afghan Adjustment Act being included in the December federal Omnibus Bill for fiscal year 2023.

“While the evacuees of Operation Slingsho 11 are already LPR’s and thus the bill doesn’t impact them, there are still tens of thousands of allies still trapped in Taliban-controlled Afghanistan, and even more still that are in the U.S., who risk deportation after fighting with us,” Stern said.