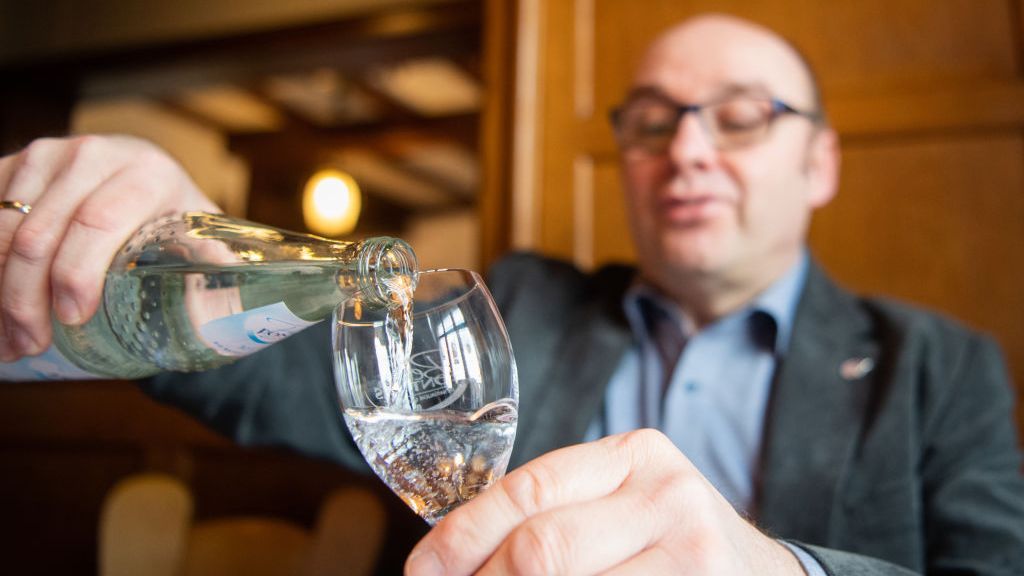 A man pours mineral water from a bottle into a glass. The 8x8 rules suggest to drink 8 glass of water daily. TOM WELLER/PICTURE ALLIANCE VIA GETTYIMAGES

Staying properly hydrated can slow aging and halve the risk of dying young, according to new research. The study, published in the journal eBioMedicine, expands on research the scientists published last March, which linked higher ranges of normal serum sodium levels with heart failure.

Adults who drink around two liters of water a day (4.2 pints) develop fewer life-threatening illnesses such as heart and lung disease.

They also live longer than those who may not get sufficient fluids.

The findings are based on 11,255 individuals tracked for up to 30 years. They could lead to a screening program for older patients.

A recommendation known as the “8×8 rule” advises downing eight 240ml glasses a day (0.5 pints) almost two liters – on top of any other drinks.

Commuters are encouraged to take bottles for their journeys and schoolchildren bring them into their lessons.

Few office meetings commence without a giant jug sitting in the middle of the desk.

“The results suggest proper hydration may slow down aging and prolong a disease-free life,” said Dr. Natalia Dmitrieva as a Co-author of the National Heart, Lung, and Blood Institute (NHLBI) in Maryland.

Her team analyzed data from the ARIC (Atherosclerosis Risk in Communities) study involving people from across the US.

Blood samples showed those with high amounts of sodium – which goes up as fluid intake falls – were more prone to chronic conditions and advanced biological aging.

They were also more likely to die younger than their counterparts whose levels were in the medium range.

The researchers assessed information participants shared during five medical visits – the first two when they were in their 50s and the last when they were aged 70 to 90.

Biological aging was measured through 15 markers, including blood pressure, cholesterol and glucose levels.

Adults with higher levels of sodium within the normal range – defined as between 135-146 milliequivalents per liter (mEq/L) – were more likely to show signs of decline.

This was based on indicators such as metabolic and cardiovascular health, lung function and inflammation.

Those with readings above 144 mEq/L were 50 percent more likely to be biologically older than their chronological age.

This was compared to ranges between 137-142 mEq/L. Levels around 143 mEq/L correlated with an increased risk of up to 15 percent.

Chronic conditions rose by up to two-thirds (64%) in those whose sodium was above 142 mEq/L.

Conversely, peers with sodium levels between 138-140 mEq/L had the lowest risk of developing these illnesses.

Controlled trials are necessary to determine if optimal hydration can promote healthy aging, prevent disease and lead to a longer life.

But the associations can still inform clinical practice and guide personal health behavior.

“People whose serum sodium is 142 mEq/L or higher would benefit from evaluation of their fluid intake,” said Dr. Dmitrieva.

Most people can safely increase their fluid intake to meet recommended levels, which can be done with water as well as other fluids, like juices, or vegetables and fruits with high water content.

Others may need medical guidance due to underlying health conditions.

“The goal is to ensure patients are taking in enough fluids while assessing factors, like medications, that may lead to fluid loss. Doctors may also need to defer to a patient’s current treatment plan, such as limiting fluid intake for heart failure,” said  Dr. Manfred Boehm, Co-author and director of the Laboratory of Cardiovascular Regenerative Medicine at NHLBI.

About half of people worldwide don’t meet recommendations for daily total water intake, which often starts at six glasses (1.5 liters).

“On the global level, this can have a big impact. Decreased body water content is the most common factor that increases serum sodium. The results suggest that staying well hydrated may slow down the aging process and prevent or delay chronic disease,”  Said Dr. Dmitrieva.