The US Has A New Lightning Capital, And It’s Next To A Popular Tourist Destination

Lightning is one of nature's most powerful forces, and in 2022, there was an increase in lightning activity in the United States
By Brian Lada January 9, 2023
Facebook
Twitter
Linkedin
Email 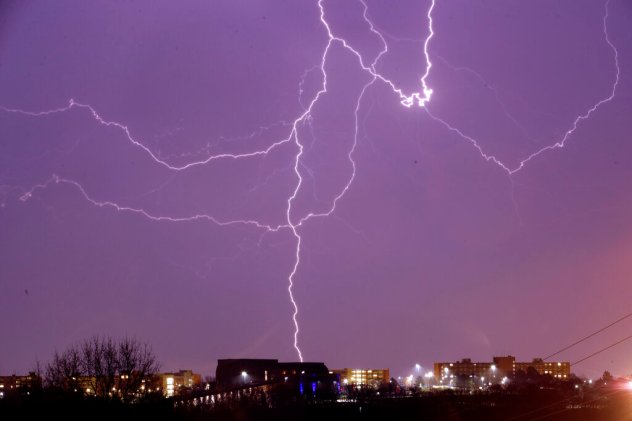 Lightning is seen in the sky over the University of Kansas in Lawrence, Kan., Thursday, March 26, 2020. Strong winds and hail are forecast for the area. Texas topped the list of the states where the highest number of lightning events occurred, followed by Florida, Louisiana, Oklahoma and Mississippi. ORLIN WAGNER/ACCUWEATHER

Lightning is one of nature’s most powerful forces, and in 2022, there was an increase in lightning activity in the United States. In fact, there were more lightning bolts detected across the U.S. last year than there have been since the turn of the decade.

Vaisala Xweather, an environmental measurements company, has released its annual lightning report for 2022 that details lightning trends across the country, how many bolts were observed in each state and which town in the United States is the new lightning capital.

Chris Vagasky, a meteorologist at Vaisala Xweather, recently spoke with AccuWeather National Reporter Bill Wadell about 2022, to discuss the 198,227,289 lightning events observed across the U.S. throughout the year.

“One of the big things is that lightning trends or lightning counts are starting to return towards normal,” Vagasky told Wadell, adding that there was a below-average number of lightning bolts over the U.S. in 2020 and 2021. The 198 million lightning events in 2022 were the most recorded since 2019 when 223 million events were detected.

Texas topped the list of the states where the highest number of lightning events occurred, followed by Florida, Louisiana, Oklahoma and Mississippi. This is the same order as the top-five lightning leaders of 2021 except for Mississippi replacing Kansas for the #5 spot.

Additionally, the 2022 lightning capital of the county was not located in the Lone Star State, but rather, in the Sunshine State.

“A lot of people want to get back out. They want to get traveling, explore nature,” Vagasky explained. “When people are out enjoying life and they’re on a vacation, they’re not necessarily thinking about the thunderstorm that’s 5 miles away [or] 10 miles away.”

On Thursday, Aug. 4, 2022, four people who were visiting Washington, D.C., were struck by lightning while standing in a park across the street from the White House. The incident left three dead and a fourth person injured.

Additionally, nearly one-third of all lightning fatalities occurred on a weekend when people typically spend the most amount of time outdoors.

“When there’s thunder that you can hear [or] when you can see lightning, it is time to start thinking about getting inside because there is no safe place outside when thunderstorms are in the area,” Vagasky said.

Hurricane Ian stood out in Vaisala Xweather’s report as the historic hurricane produced an unusually high amount of lightning as it rapidly intensified before making landfall along Florida’s Gulf Coast on Sept. 28.

“Vaisala detected more than 34,000 lightning events associated with Hurricane Ian between September 27 and 28,” Vagasky said. Nearly all of these flashes took place in the eyewall, the most intense part of the hurricane.

“At the peak, Vaisala was detecting lightning in the eyewall every three seconds,” he added.

“Check out this visible satellite loop with frequent lightning in the eye wall of intensifying Hurricane Ian on approach to southwest Florida. Agitated thunderstorm tops and gravity waves ripping all over the place” tweeted by Chris Timmer.

One of the biggest standouts was not related to a thunderstorm or hurricane, but rather a cataclysmic volcano eruption.

On Jan. 15, 2022, the Tonga volcano erupted in the Pacific Ocean with such force that it sent particles to the edge of space and created a shockwave that circled the globe twice.

Nearly 400,000 lightning events were detected in six hours, including 25,500 in five minutes, according to Vaisala Xweather. This averages roughly 85 lightning bolts per second.

“That was one of the most prolific lightning producers that we’ve ever seen,” Vagasky said. “This is the most extreme concentration of lightning that has ever been detected by a global lightning network.”

The volcanic eruption bolstered the number of global lightning strikes in 2022, and it may have impacted the weather on a global scale as it injected an influx of water vapor into the stratosphere.

NASA said that “the huge amounts of water vapor from the eruption may have a small, temporary warming effect” in parts of the globe.

The change in temperature could ultimately influence weather patterns, including the number and intensity of thunderstorms and the lightning produced, although the exact meteorological impact of the eruption is still unclear.