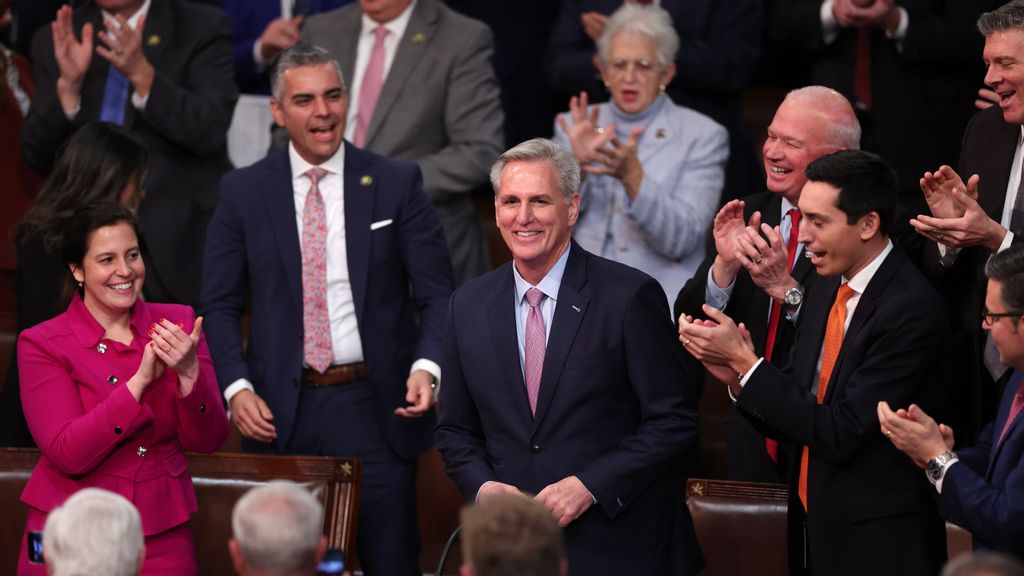 Republican members-elect celebrate as House Republican Leader Kevin McCarthy (R-CA) is elected Speaker of the House in the House Chamber at the U.S. Capitol Building on January 07, 2023 in Washington, DC. After four days of voting and 15 ballots McCarthy secured enough votes to become Speaker of the House for the 118th Congress. WIN MCNAMEE/BENZINGA

The California representative secured the position after giving into major concessions to far-right House members.

McCarthy, who could only afford to lose four votes, took roughly five days to win the necessary number of backers to become House Speaker that is a historical record.

McCarthy, 57, is now the highest-ranking Republican in the nation, and second in line for the presidency.

Democratic Representative Hakeem Jeffries handed McCarthy the gavel shortly after 1 a.m. Saturday. In his acceptance speech, McCarthy promised that the House will be a check on President Joe Biden and his policies.

“You know — my father always told me: It’s not how you start, it’s how you finish,” said McCarthy, the son of a firefighter. “And now we need to finish strong for the American people.”

McCarthy’s win came shortly after tempers boiled over and pandemonium broke out on the House floor late Friday night when McCarthy and his allies suffered defeat on the 14th straight ballot after miscalculating that they had the vote wrapped up.

At one point, more than 20 Republican House members opposed McCarthy — considered the favorite — in a dramatic back-and-forth over the course of the week.

That all came to an end early Saturday morning when he managed to sway enough holdouts to cross the necessary threshold of votes.

The victory, hardly a feather in his cap, allows Congress to proceed — business as usual.

So long as there was a stalemate, the speakership struggle froze the House, preventing new Representatives from being sworn in.

Progress for McCarthy was slow earlier in the week, but he gained momentum in a Friday afternoon vote when 14 of his 20 detractors flipped to vote for him after four days and 12 rounds of balloting.

McCarthy projected confidence ahead of a planned 14th round of voting late Friday night, pledging to reporters: “We’re going to get it done tonight.”

But then McCarthy failed once again to reach the threshold needed to assume the gavel. McCarthy needed a majority of all members voting to win, which can fluctuate depending on who shows up. Of 432 votes cast in the penultimate round, McCarthy had 216.

Rep. Lauren Boebert of Colorado, one of the most vocal McCarthy opponents who called the ongoing five-day debate “healthy,” cleared the path to his election by voting “present.”

When his conservatives detractors again denied McCarthy the gavel, Rep. Mike Rogers, R-Ala., the incoming chairman of the powerful Armed Services Committee, charged at Gaetz., and began angrily shouting. Rep. Richard Hudson, R-N.C., had to physically restrain Rogers, pulling back his shoulders and at one point putting his hands over Rogers’s mouth.

Others nearby also stepped in before Rogers stormed off.

“That was a very tense moment, and I was just trying to play a role to keep the tensions down,” Hudson said as he left the floor.

Rep. Tim Burchett, R-Tenn., was seated between Rogers and Gaetz when the altercation occurred. Photographs show he also tried to restrain Rogers.

“It’s just an unfortunate moment is all it was. It shouldn’t have happened. He shouldn’t have crossed that line,” Burchett told reporters. “Nobody’s gonna put their hands on me, nobody’s going to threaten me. That’s it. Bottom line.”

In the end, the final vote count was 216 for McCarthy and 212 for Jeffries of New York.

This week wasn’t a good look for the GOP, which holds a narrow majority over the Democrats in the House of Representatives.

“I find it embarrassing,” Georgia Rep. Marjorie Taylor Greene said. “I’ve been here for two years without committees, and I’m really ready to get to work.”

This was the longest House Speaker election since 1859.

The chaotic week-long process underscores just how divided the 118th Congress is.

Whether the Republican holdouts, some of which were supporters of former President Donald Trump and the Capitol Insurrection, will cooperate with establishment Republicans remains to be seen.

«Previous Post
McCarthy Took $2 Million From FTX Crypto Scam Co-Founder»Next Post
The New Congress Is Finally Sworn In. What’s In Store For US Jews And Zionism?