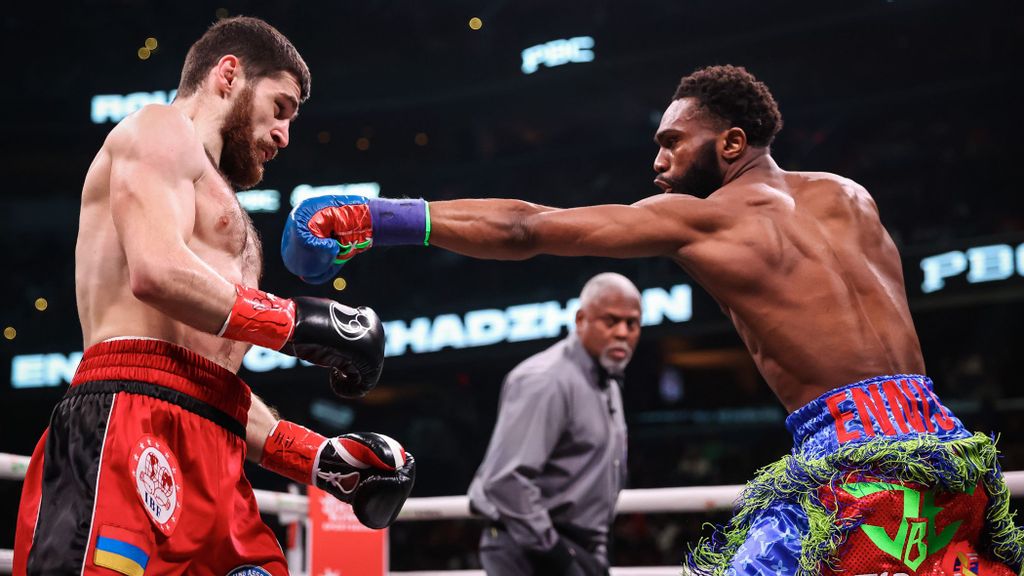 Undefeated Jaron Ennis (right) won every round of Saturday's unanimous decision over Karen Chukhadzhian (left) to earn the vacant IBF welterweight crown at Capital One Arena in Washington, D.C.

Jaron Ennis declared himself  “ready to take over this division” following a one-knockdown, second-round stoppage of previously undefeated Custodio Clayton in May.

But last night at the Capital One Arena in Washington, D.C., the “Boogey Man” of the weight class looked human for the first time in his professional career.

“Boots” Ennis (30-0, 27 KOs) won every round of Saturday’s 12-round (120-108 three times) unanimous decision over Karen Chukhadzhian (21-2, 11 KOs) of Ukraine, even as the switch-hitting Philadelphian failed to earn his 20th straight knockout while earning the IBF interim welterweight crown before a sold out crowd of 19,731.

The 25-year-old Ennis went beyond six rounds for the first time as a pro against the game, elusive and steel-chinned Chukhadzhian, who had stopped 11 opponents in 20 consecutive victories and was coming off his fourth straight knockout with July’s sixth-round stoppage of Blake Minto.

“I think it’s good that we went 12 rounds in this fight because he didn’t even get tired,” said Derek “Bozy” Ennis, Jaron’s father and trainer. ”Maybe now they’ll fight him, thinking, ‘Hey, he couldn’t knock that guy out.’ So maybe, now, they’ll engage.”

But Cliff Rold of BoxingScene.com isn’t so sure that’s the case.

“Some guys have to earn their big fights and some guys don’t. Why is that? Because if a fighter is choosing between two opponents, then there might be one opponent they can make good money against that they know they can beat,” Rold said. “But then there’s another opponent where they might make good money but there’s a good chance they’ll get their ass kicked, that’s not who they want to fight first. In Jaron Ennis’ case, Jaron Ennis is the guy that if you fight him, you might  get your ass kicked.”

Ennis fought on a card headlined by five-time, three-division and WBA 135-pound champion Gervonta Davis (28-0, 26 KOs) of Baltimore, who won a clash of southpaws by ninth-round TKO over rising former WBA 130-pound titlist Hector Garcia (16-1, 10 KOs) of the Dominican Republic.

“We come here to dominate. I feel like I could have thrown more punches. I should stop that guy and that’s on me. We did what we could. I learned to just take my time and to not rush anything,” Ennis said. “I’m glad I went 12 rounds. It felt great. He ran a lot. Hats off to him since a lot of guys didn’t want to fight me. So shout out to him for coming here and taking this fight.”

Ennis had ranked himself the No. 1 welterweight ahead of left-handed IBF/WBA/WBC champion Errol Spence Jr. (28-0, 22 KOs) and his unbeaten switch-hitting WBO counterpart and three-division champion Terence “Bud” Crawford (39-0, 30 KOs), and has continuously called them out.

“Everyone knows that I want Errol Spence,” Ennis said. “I’ll wait until the time is right and (Spence) is ready.”

Spence was ringside in May at the sold out Dignity Sports Park in Carson, California, when Ennis delivered his 19th straight knockout against Clayton, who entered at 19-0-1 (12 KOs) before being floored and stopped in the second round.

Spence’s trainer, Derrick James, was present at Capital One to witness last night’s performance by Ennis, who is ranked No. 1 by the IBF, No. 2 by the WBA and WBO, and No. 3 by the WBC.

“I think that Jaron Ennis is ready, but at the same time, it’s all about growth, and he just needs to stay focused on whatever his next fight is going to be,” James said. “You need fights like this in order to help you to grow because you’re not going to knock everybody out. So this was a great performance for him to go back and to evaluate himself and to see what he can do better.”

Ennis also added to his hit-list former champions Keith Thurman and Yordenis Ugas as well as contender Vergil Ortiz (19-0, 19 KOs), the latter being rated No. 1 by the WBA and WBO, No. 2 by the WBC and No. 3 by the IBF.

“I want to fight three times this year, so I’m very excited to get back into the ring and it doesn’t matter who it is, whether it’s Vergil Ortiz, Errol Spence, [Terence] Bud [Crawford,] Keith Thurman or [Yordenis] Ugas. The main goal is to be undefeated and I want to be undisputed champion at 147 pounds, and then to do the same thing  at 154 and the same thing at 160.”

It appeared that 29-year-old division rival Rashidi (Speedy) Ellis (24-1, 15 KOs), of Lynn, Massachusetts, might be a decent challenge for Ennis prior to being battered and floored twice in the final round of a Saturday’s 12-round majority decision loss to Roiman Villa (26-1, 24 KOs) of Venezuela in an IBF eliminator.

“I was on top of him from the first round. I know that fighters such as him who are quick sooner or later will get a little tired and that’s what I took advantage of. My corner told me to knock him down (in the 12th round). I couldn’t do it on the first try but I kept going,” said Villa, who won 114-112 (twice) with the third judge scoring it even at 113-113.

“I didn’t really feel like I needed the knockout in that last round, I just wanted to dominate. I thought he just fell on the last knockdown so I wasn’t sure if it was a knockdown, but if they want the rematch we’ll give them the rematch. I like the Mexican fighters with balls and I like the way he fights so I would definitely give him the rematch.”

In the first televised bout, left-handed two-division champion Demetrius Andrade (32-0, 19 KOs) of Providence, R.I., scored second-round and final round knockdowns during his shutout 10-round unanimous decision over journeyman Demond Nicholson (26-5-1, 22 KOs) of Laurel, Md., in a 168-pound bout.

“I felt good. I can definitely tell the weight difference but the speed and combinations and the IQ was the plan today and that’s what we did. The weight was different,” said Andrade, who was competing in his first 168-pound bout.  “Everyone knows that Demond Nicholson is a dog. That’s why we took this fight. He took this fight because he knew I was coming up and he definitely has the animal in him.”