While Andrade has picked his battles, Nicholson has taken every opportunity the boxing world has thrown at him and has one further advantage against Andrade – this time, he feels fully healthy.
By Joseph Hammond January 7, 2023
Facebook
Twitter
Linkedin
Email 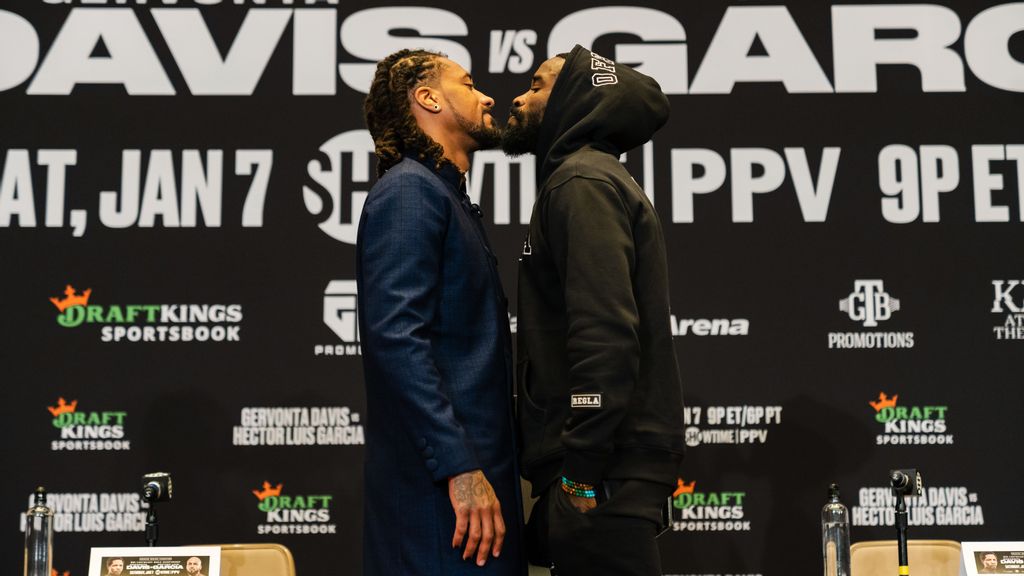 Andrade and Nicholson face off in a presser on January 5 in Washington D.C. (Premiereboxingchampions.com)

For veteran boxer Demond Nicholson, now isn’t the time for being humble. In a fiery press conference this week, he vowed to get his career back on track with a knockout of Demetrius Andrade.

“When I first came in the game, I was just knocking people out. I was doing Mike Tyson numbers, Tank [Gervonta Davis] numbers,” Nicholson said in an interview with Zenger News.

Nicholson feels he is healthy and plans to blast Andrade out of the ring.

On January 7th, Laurel, Maryland native Demond Nicholson (26-4-1) will face the undefeated Demetrius “Boo Boo” Andrade (31-0) at the Capital One Arena in Washington D.C. In the main event, Gervonta Davis (27-0) will put his WBA lightweight world title on the line against Hector Luis Garcia (16-0) in what will be a Showtime PPV event.

The Nicholson vs. Andrade fight features two fighters who have made very different business decisions. Andrade backed down from world title and unification fights at 160lbs to chase a new title at 168lbs. This Saturday’s fight will be the first in this heavier division. This should advantage Nicholson, who also is a more natural 168lb fighter. He also has the advantage of having stayed more active –Andrade hasn’t fought in over a year.

While Andrade has picked his battles, Nicholson has taken every opportunity the boxing world has thrown at him and has one further advantage against Andrade – this time, he feels fully healthy.

Nicholson has faced potentially career-ending health issues that few athletes in their prime have faced.

“I had diabetes and high blood pressure; if my Dad didn’t take me to the hospital, I would have died in sleep,” Nicholson says of his 2019 brush with death,” some people told me I couldn’t do it, but I was back in the boxing ring in 5 months,” he told Zenger describing the time he nearly collapsed before a scheduled bout.

He was rushed to a hospital and put on dialysis. He was diagnosed with kidney failure. Demond bounced back. Became a National Kidney Foundation celebrity ambassador and won a national super middleweight title.

The kidney issue may have impacted his career between 2016 and 2018. During a four-fight streak, he won only a single fight against two losses and one draw.

Nicholson was last on a stage this big when he faced knockout artist Edgar Berlanga. Before facing Nicholson, Berlanga was on an impressive knockout streak. He had dispatched 16 straight opponents in the first round. More than that, many tapped Berlanga to be the next great Puerto Rican fighter.

He still might be, but, Nicholson, who dropped a decision to Berlanga, roughed up his young opponent. Indeed since fighting Nicholson – Berlanga hasn’t stopped a single opponent. Berlanga has rebounded to win the NABO Super Middleweight title in his next fight.

“I have had my ups and downs, but, against Berlanga, even I wasn’t fully healthy, this time will be different,” he said

Andrade appeared to mock Demond at the press conference this week, but Nicholson didn’t take the bait. At the age of 29, he is still in his boxing prime but also wise enough to let his skills speak for themselves. Demetrius Andrade is 34. Nicholson did offer advice for young fighters in his interview with Zenger News– advice he would give his younger self if he could turn back the clock.

“Other than the family, everything outside of the gym, outside of boxing, shouldn’t be a concern. Back then, I was looking for friends, chasing this and that. Now after what I have been through outside and inside the ring — I have a new focus.”