He hasn't said what he intends to do about the money, while other Republicans have turned FTX funds over to the U.S. Treasury.
By Virginia Van Zandt January 6, 2023
Facebook
Twitter
Linkedin
Email 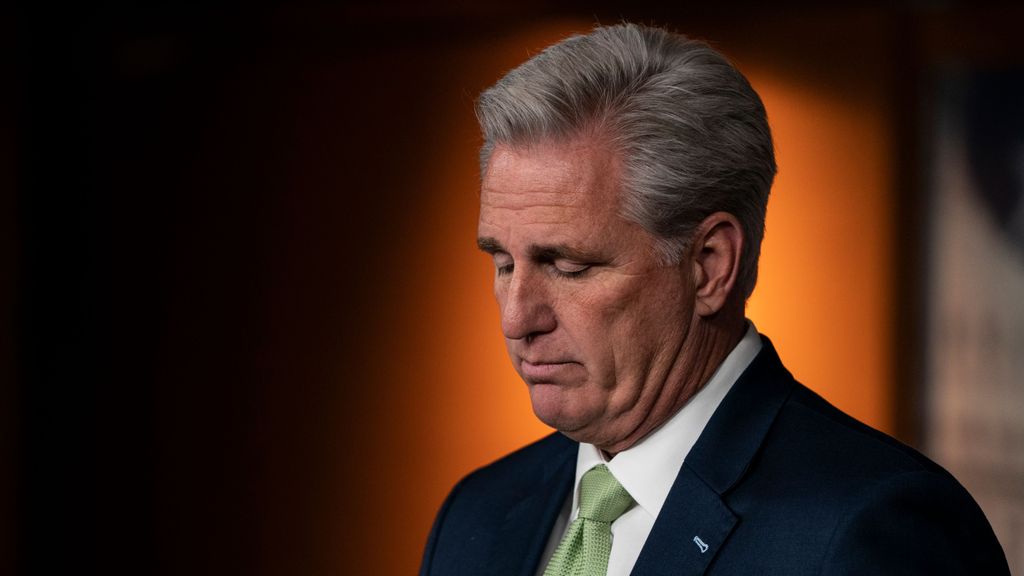 House Minority Leader Kevin McCarthy (R-CA) speaks during his weekly press conference at the U.S. Capitol on November 21, 2019 in Washington, DC. McCarthy said that his caucus would like to be passing legislation but are unable to do so because the Democrats have focused their efforts on impeaching President Donald Trump. (Photo by Alex Edelman/Getty Images)

WASHINGTON — Speaker of the House-nominee Kevin McCarthy received some $2 million from a co-founder of FTX, the crypto startup that cost investors more than $8 billion and prompted numerous federal investigations for fraud and misuse of funds.

It is unclear whether McCarthy plans to return the donations, or if his office has pledged to cooperate the Securities and Exchange Commission’s FTX investigation or other federal and state probes.

Candidates are required to return legally questionable donations or pay them over to the U.S. Treasury, according to the Federal Election Commission. Sen. Mitt. Romney (R-Utah) agreed to pay the U.S. Treasury for donations that he received from FTX.

When the investigations into FTX began, McCarthy sounded a different note, demanding a full investigation of FTX on a December 13 Fox Business channel appearance. “We really need to know where did this money go, what was he doing, what was he providing. I think having testified would have been the first start,” saidMcCarthy, speaking on Sam Bankman-Fried. “All his money goes to Democrats.”

McCarthy did not acknowledge Bankman-Fried’s tweets alleging that he had decided to give upwards of $40 million to Democrats while directing his co-founder Salame to give a similar amount to Republicans.

McCarthy spokeswoman, Christina Cameron, failed to respond to emails and phone calls; likely she was swamped by reporters demanding to know the latest in McCarthy’s bid to become speaker of the U.S. House of Representatives.

McCarthy has failed in the first 13 rounds of voting, the most cast for a speaker-candidate since 1859. A 14thvote is scheduled for 10pm Eastern Time tonight.

It is unclear if the contributions came from allegedly misappropriated funds from the failed crypto firm or came from some other source that the FTX founders had access to.

Bankman-Fried is currently awaiting trial after posting bail of $250 million. Bankman-Fried was arrested in the Bahamas in December under suspicion of wire fraud and money laundering.

Salame was the whistleblower on the transferring of FTX’s clients’ assets to related crypto firm Alameda Research, as was discovered in court filings in December. Overall, FTX co-founder Salame gave $30 million to Republicans through contributions to various PACs.

Meanwhile, McCarthy is in a desperate fight to become speaker of the U.S. House of Representatives, which requires a minimum 218 votes. So far he is at least 4 votes short.

McCarthy’s many Republican supporters tout his “conservative” credentials, while critics point to his congressional voting record, which is controversial among conservatives.

“I have watched Kevin McCarthy for longer than my 8 years serving in this Chamber, and I can say without hesitation that Kevin has brought these foundational traits of leadership to bear for the good of this institution and for the good of the American people,” said French Hill (R-Arkansas) on the House floor on Thursday.

Some conservative critics of McCarthy are pointing to his voting record to show that McCarthy has gone against party lines on numerous occasions.

McCarthy voted yes on President Biden’s $1.5 trillion Omnibus funding bill, another bill to fund vaccine mandates for the U.S. military that would deny servicemembers their jobs if they refuse to get the Covid-19 jab and has voiced support for making D.C. the 51st state, which would be expected to give two U.S. Senate seats to the rival Democratic party.

McCarthy will be present on the House floor for another vote in his bid for Speaker of the House at 10pm on Friday evening, the 14th vote to take place this week.