The House of Representatives has yet to pick a speaker over the span of three days and 11-straight voting sessions
By Anthony Noto January 6, 2023
Facebook
Twitter
Linkedin
Email 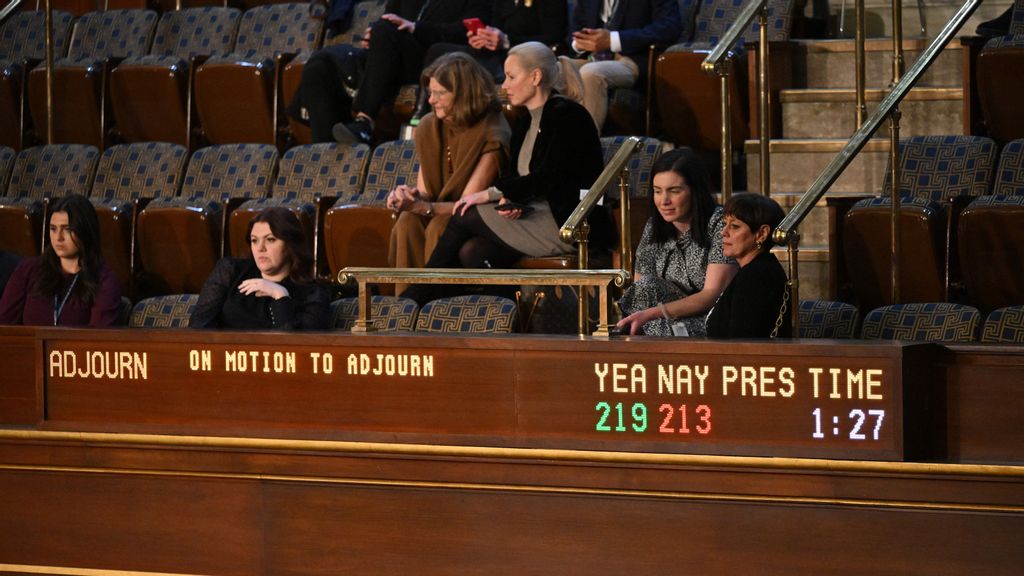 Onlookers watch as a board displays the vote count as members of the House of Representatives vote on a motion to adjourn, at the US Capitol in Washington, DC, on January 5, 2023. - The US House of Representatives plunged deeper into crisis Thursday as Republican favorite Kevin McCarthy failed again to win the speakership -- entrenching a three-day standoff that has paralyzed the lower chamber of Congress. MANDEL NGAN/BENZINGA

The House of Representatives has yet to pick a speaker over the span of three days and 11-straight voting sessions — each one growing more contentious.

“We need a businessman,” shouted Virginia Rep. Bob Good in his formal nomination of Rep. Kevin Hern on Thursday evening. “Make the House of Representatives great again,” Matt Gaetz of Florida proclaimed in his nomination of former President Donald Trump.

The suggestions appeared to vex those on both the left and right sides of the chamber, with Trump getting the least number of votes (one out of 432 from Gaetz), underscoring his dwindling support within the GOP.

Republican leader Kevin McCarthy held 200 votes as of Thursday evening, unable to secure the necessary 218 votes needed to become speaker of the House of Representatives.

After 11 failed ballot initiatives, the GOP leader is reportedly hustling to cut a deal with his dissenters, otherwise, he’s in “serious trouble,” per Punchbowl News.

“NEWS: HOUSE REPUBLICANS pushing to elect a speaker tonight, per sources involved in the talks” tweeted by Jake Sherman of Punchbowl News.

McCarthy lost 20 Republicans on the 11th vote, with one GOP member-elect voting “present.” With 222 Republicans in the newly elected House, he could only afford to lose four of them to reach the 218 needed to win the speakership.

The speaker election is now guaranteed to go at least 12 votes. It has only gone longer than a dozen ballots four times in U.S. history.

Earlier in the day, McCarthy sounded optimistic about talks between his top lieutenants and a group of holdouts.

“I think everyone in the conversation wants to find a solution,” McCarthy said on his way into the House chamber for the day’s first vote according to CNBC.

Twitter CEO Elon Musk caused a social media firestorm when he endorsed Rep-elect Kevin McCarthy, R-Calif., to be Speaker of the House.

“Kevin McCarthy should be Speaker,” Musk tweeted Thursday which ignited a flurry of responses ranging from respectful disagreement to outright mockery of the billionaire’s endorsement.

Despite McCarthy’s efforts, his opponents as of Thursday evening, remained opposed to his appointment.

“It’s all going to be this way until an agreement comes,” McCarthy told CNN. “It’s easier if we’re able to all get an agreement together.”

Asked by CNN the point he would make a realization that the outcome won’t change, McCarthy said: “After I win.”

Here’s what is known about the concessions he’s trying to make:

McCarthy’s offers were expected to attract new support, but multiple media outlets are reporting that they won’t be enough to secure the necessary 218 votes he needs to be the speaker.

One moderate Republican told CNN Thursday morning that they aren’t happy about the concessions, though they are willing to have “discussions” about them.

The fear is that lowering the threshold for a vote to oust the speaker to one member will make governing on items like the debt limit and funding almost impossible.

“I don’t like the rules but am willing to hear discussions. I think they’re a mistake for the conference. These handful of folks want a weak speaker with a four-vote majority. The public will not like what they see of the GOP, I fear,” the member said.

“A deal is NOT done.  When confidences are betrayed and leaks are directed, it’s even more difficult to trust.  Totally unsat. I will not yield to the status quo.” Perry tweeted.

Rep. Ralph Norman (R-S.C.), one of McCarthy’s opponents, said that there was a deal “on paper,” but cautioned that it was a first step.

“It’s changes that we wanted. Now we’ve got a lot more that we want to get to. This is round one. It’s on paper. Which is a good thing,” Norman said.

Other McCarthy opponents acknowledged significant progress, but were cagey about whether they had reached a final proposal for both sides to sign off on according to Politico.

C-SPAN’s cameras caught McCarthy talking to Rep.-elect Andy Ogles on the House floor Thursday in an apparent attempt to garner his vote. Ogles, a Tennessee Republican, has repeatedly voted against McCarthy’s speakership bid and appears to have remained steadfast during the discussion.

As McCarthy and Ogles go back and forth during the tense conversation, McCarthy appears to become increasingly more animated and frustrated. However, what was said during the exchange remains unclear.

The stakes are high. So long as a House speaker isn’t elected, no new appointments can be made, no budget decisions can be made and legislature can’t move forward.

Only seven times has it taken more than nine times to elect a House speaker. None of those times occurred in the previous 100 years.

Adding fuel to the fire is Gaetz, who voted for Trump, despite the former President’s ongoing legal issues, his failure to pay taxes as well as his role in the Jan. 6, 2021 insurrection.

Hern, meanwhile, has received scrutiny in his own right for not disclosing stock trades while serving in Congress.

This is a developing story, as Republican lawmakers intend to make a decision tonight on whom to elect the next speaker of the House.

There was a motion to adjourn, but the majority of chamber members voted “no.”