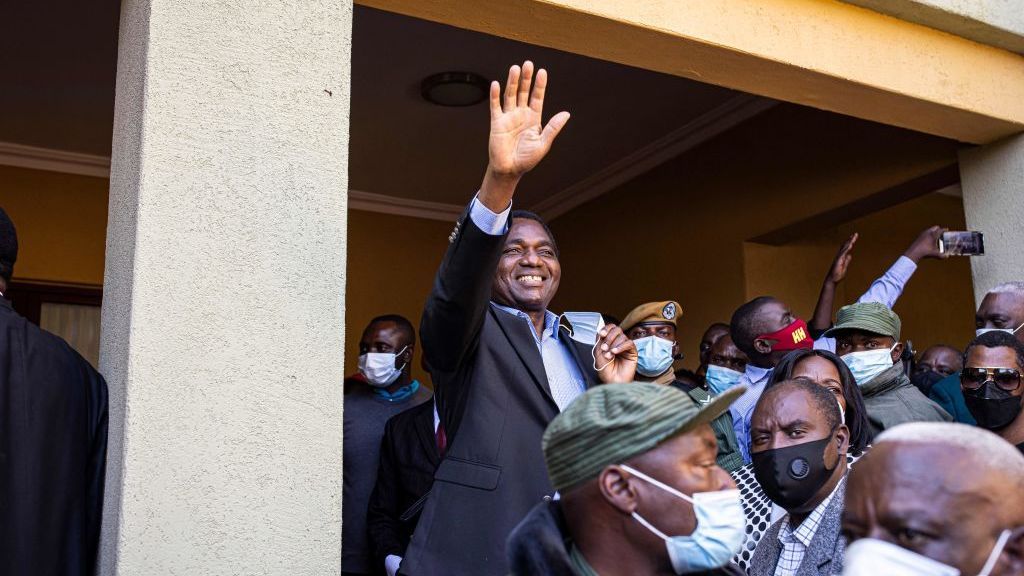 President elect Hakainde Hichilema (C) waves at supporters after a press briefing at his residence in Lusaka, on August 16, 2021. For the United States, President Hakainde Hichilema’s victory in 2021 was welcomed in a country whose politics have been unexpectedly turbulent. PATRICK MEINHARDT/AFP via GETTYIMAGES.

The Biden administration has offered rare praise to Zambia as U.S. relations between Zambia and the United States blossom. Perhaps best exemplified by the United States designating that Zambia will be a co-host of an important Democracy Summit at the end of March.

For the United States, President Hakainde Hichilema’s victory in 2021 was welcomed in a country whose politics have been unexpectedly turbulent. The past two decades have seen two of the country’s presidents die in office due to poor health: Levy Mwanawasa (2008) and Michael Sata(2014).

When President Lugu, who was a minister under Micheal Sata became Zambia’s president he cracked down on the opposition in a country which has one of Africa’s more stable democratic traditions.

Then President Lugu put future president Hichilema in jail for alleged treason in 2017 due to an obscure traffic incident. It was one of over a dozen jail stints in his long career but, this one attracted notable international attention.

During Hichilema’s months in jail, he was visited by the Secretary General of the Commonwealth Patricia Scotland and former President of Nigeria Olusegun Obasanjo. Perhaps due Scotland’s visit President Lugu skipped the 2018 Commonwealth Head of Government (CHOGM) meeting in London. The delegation that did attend stuck to a tight script, speechwriters were hired for even relatively minor public appearances during that event.

Things have changed under President Hichilema with the governments foreign policy becoming more frank and free-flowing. The U.S. organized Democracy Summit will also be hosted by South Korea and Panama this year.

“The hosting of the democracy summit is a big a deal in a statement regarding where we have gone in regard to governance and where we are going,” said Chola Milambo, the Permanent Representative of Zambia to the United Nations,” Especially at a time in Europe and elsewhere we see democracy under question.”

Yet, there have been other important changes as well. Last month Hichilema signed into law a bill to abolish the death penalty. The policy puts the country in line with many other Commonwealth countries and a growing number of African states as well. Three countries the Central African Republic, Equatorial Guinea and Zambia all abolished the death penalty last year.

“This was one of the reforms out forward by the president and has been at the top of his agenda,” said Milambo, “this was a legacy of the colonial era, since 1997 all former presidents have been converting death sentences to life imprisonment.”

Also, in December repealed a law which made insulting the president a punishable offense. “The president believes in the freedom of expression, in democracy, and his policies since coming to power reflect this,” Milambo said.

His moves may also be inspired by his experiences as a former persecuted opposition leader and  as a man of faith. Hichilema is an Adventist, has also committed himself to Zambia’s status as a Christian nation. However, in keeping with his democratic beliefs Hichilema has also gone out of his ways to embrace religious pluralism the countries small Muslim population is well respected and the country recently welcomed its first Jewish rabbi in decades.

For the Biden administration Hichilema is a possible model for democracy activists around the globe. Biden himself mentioned Zambia in his speech during the United Nations General Assembly in 2021 in which he praised the recent electoral victory of Hichilema.

“[T]he young people of Zambia who harnessed the power of their vote for the first time, turning out in record numbers to denounce corruption and chart a new path for their country,” Biden Said at the time.

Hichilema himself invited opposition leaders across Africa to his inauguration. Democracy is flourishing on the bank of the Zambezi though it will take more than rhetoric and high ideals for popular government to keep inspiring the people of Zambia. Zambia defaulted on its sovereign-debt obligations in November 2020 when it missed a $42.5 million debt repayment. Hichilema has thus far returned growth to Zambian economy though a debt crisis looms, one which the Biden administration seems keen to help Lusaka mitigate.

Last month U.S. Treasury Secretary Janet Yellen spoke of the “need to address debt sustainability and the imperative to conclude a debt treatment for Zambia under the Common Framework as quickly as possible,” during Hichilema’s trip to Washington D.C.  She is expected to visit Senegal, South Africa, and Zambia during a trip to the continent later this month.

“We want our young people to know democracy has an economic dividend as well. That it can improve their material well-being as well,” said Milambo.