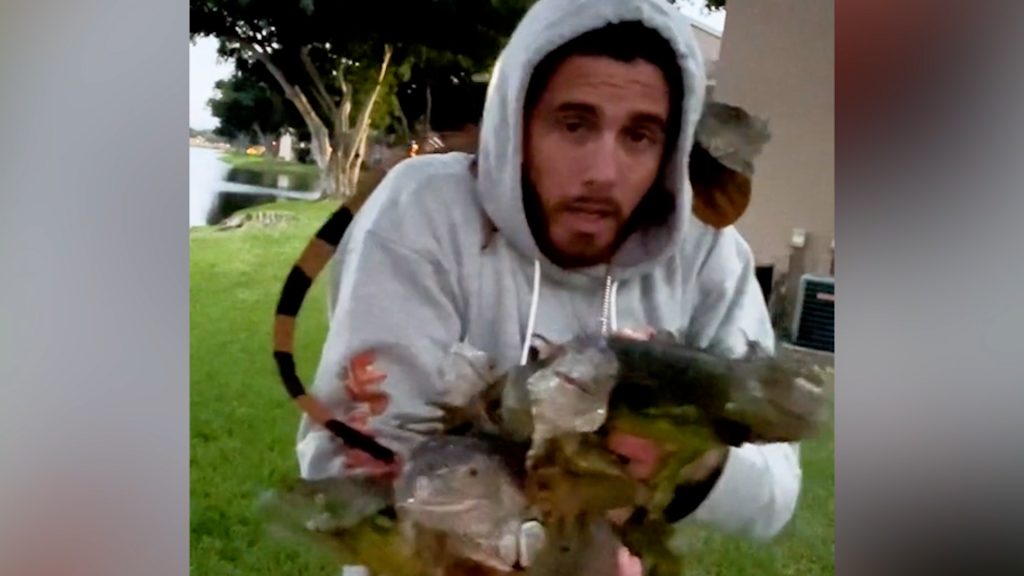 Brendan Denuyl, 29, filmed himself collecting an array of iguanas in his arms in Pembroke Pines, South Florida. (Photo via SWNS)

An animal-lover filmed himself collecting iguanas which froze and fell out of palm trees due to Storm Elliott blasting Florida.

The reptiles have been left unable to move and falling out of palm trees during the killer cold snap, which has claimed nearly 60 lives across eight U.S. states.

Snakes have also been impacted by the unusually cold weather.

Once Denuyl had a good handful and a few more on the ground, he made a video showing people how iguanas in south Florida react when temperatures dropped. Showing a live example of how lethargic and almost paralyzed they become. There are also snakes freezing in the middle of the road. Most snakes and lizards will find a near road to bask on throughout the year. However, when temperatures dropped to 40 degrees, they freeze up on those roads and can’t escape or even move.

“As for me, I can’t stand when our state is cold,” Denuyl said.

People live in a state where there is one season all year, summer. So when people have just one week that it gets super cold, people get sick, lips get chapped, and nobody wants to leave the house.

“I still did because I’m an outdoorsman, but it definitely affects all life in south Florida,” Denuyl said.

The Florida Fish and Wildlife Conservation issued a statement explaining that the creatures only go into a temporary state of paralysis.

They also discouraged people from letting them into their homes during the cold weather as they would soon be reanimated.

Frozen iguanas aren’t the only way in which the creatures have caused issues for Florida residents.

Last month Lake Worth Beach, Florida had a severe power outtage due to an incident caused by an iguana.

“The iguanas are a particularly complex issue but one that we, and other utilities, are addressing,” city spokesman Ben Kerr said at the time.