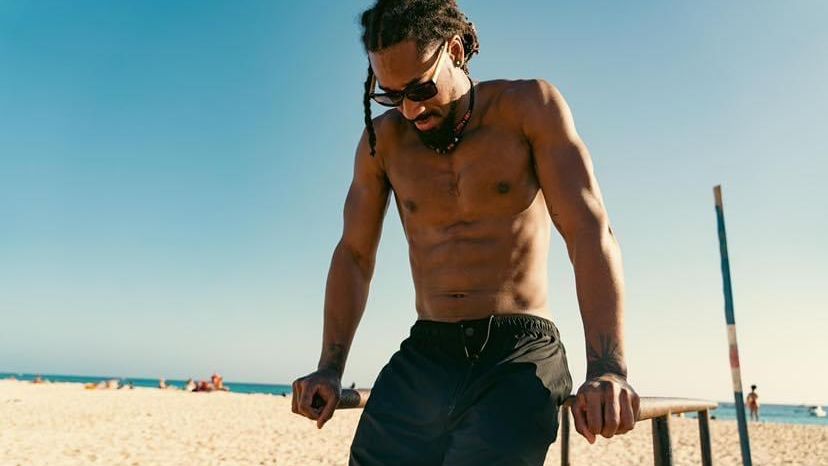 Demetrius Andrade flexes his muscles on a beach in California in this file photo. Andrade expects to feel phsycially and mentally healthier with a 8 pound jump to super middleweight. DEMETRIUS ANDRADE

PROVIDENCE, R.I. — Maintaining an undefeated record of 31-0 with 19 knockouts has placed Demetrius Andrade as one of the top fighters in boxing. On January 7th, he looks to add his 32nd victim to his resume when he faces Demond Nicholson (26-4-1) 22 knockouts as the PPV opener for Gervonta Davis-Hector Luis Garcia. Andrade hopes a win against Nicholson will land him the much-anticipated bout between him and Jermall Charlo later in the year. Andrade will be moving up 8 pounds to the super middleweight division for his January 7th Showtime PPV opener. The highly skilled southpaw aims to have a busy year, considering he didn’t fight in 2022.

Andrade talks to Zenger News about his ring return, future plans, and much more.

Andrade: Everything is cool, man. Just getting back in action.

Zenger: After a spectacular showing in 2021, you didn’t fight in 2022. Did you use that time to stay sharp or step away from the sport? What did you do during that down time?

Andrade: For sure. Keeping my body in good shape, my mental, my family, and doing what I believe is right.

Zenger: Demond Nicholson was the first guy to go the distance against Edgar Berlanga, so we know how tough he is. What else does he bring to the table in your opinion?

Andrade: It’s a fight. I prepare for every situation that can occur in a boxing fight. I’ve been in this game for a long time, I know the do’s and don’ts. He’s a tough guy, he comes in great shape, he’s coming to make his mark as we all do. There are definitely levels, And Still&mldr; (laughing).

Zenger: After 31 professional fights, what are you still learning about yourself as a fighter?

Andrade: How much you can mentally and physically push yourself to the limit. There’s a lot more there than we think. That’s what I build myself off of. Now, it’s about keeping that mental strength by doing certain things. It’s all about pushing myself to the limit, not overdoing it of course, because you don’t want to leave it all in the gym but pushing the smart way.

Zenger: Does your approach change fighting at 168 pounds opposed to 160?

Andrade: We do the same things. It’s going to feel a lot better to not have to lose those 8 pounds. Believe it or not, 8 pounds makes a difference in terms of power, strength, energy, and hydrating. That stuff plays a major part when you have to fight the next day. Just like I went up to 160 and felt really good and had a lot of energy, I think I’m going to feel the same way moving up to 168. It’s about energy, man. A lot of these fighters are draining themselves, getting down as low as they can. The next day, fight day, they’re not 100%. I believe I have never been 100% because of those reasons. I think moving up at this time in my career, I’m going to be 100% Demetrius Andrade when fight night comes. I have nothing to prove but do what I do in any weight class I compete in. I don’t need to sit there and be like, “I’ve been at 160 pounds for 20 years.” Body genetics matters too, everybody is different.

Zenger: Fighters want to stay busy. How important was it for you to get this fight in early January [January 7th] to set the tone for the year?

Andrade: It was a good opportunity for me to get back in the ring. We were supposed to fight in December and then they came up with this. I was going to headline my own card in December and then they asked me to be the opening bout on the Gervonta Davis card. I didn’t have a problem with that. We’re getting paid and it was a card I wouldn’t mind doing what I do best on and helping the PBC and Showtime movement. I’m part of that, it’s an honor for them to have me and for me to have them too.

Zenger: We just spoke of how difficult a task Nicholson can be as an opponent, so not looking past him at all, but you didn’t get this far not looking ahead. What type of year would satisfy Demetrius Andrade inside of the ring?

Andrade: My purpose right now is to get through Demond Nicholson, let them know I’m here, we want [Jermall] Charlo next. That’s what we’re looking forward to this year. I’m going to be campaigning and pushing for that fight. If it doesn’t happen right off, I’m going to see what the next best thing is, so I can stay busy and stay sharp as well. We’re looking to get in there with Charlo.

Zenger: Super impressive knockout victory against Jason Quigley in your last fight. Can we expect that same aggressive-fast start against Nicholson on the 7th?

Andrade: Yeah! Every fight is different. Every style brings out a different style. One thing about the creative styles that I come out with; I’m looking to knock my opponents out. I’m looking for the stoppage. There are some tough guys out there. There are some guys who are going to take these hits, get back up, and keep fighting. I try to tell the younger guys, it’s always nice to look for those knockouts, but when you’re fighting someone that’s trying to feed their families, during a 10-12 round fight, those things take time. It takes time to break guys down that have that purpose of this is the only way I eat. These are the type of guys I get in the ring with. They want to make a living and continue their career, so you gotta break down a lot of layers. My purpose is to go in there and get the stoppage. Everyone check out my YouTube, Demetrius Andrade, same on all my social media pages, and God Bless you and Happy Holidays to everyone.