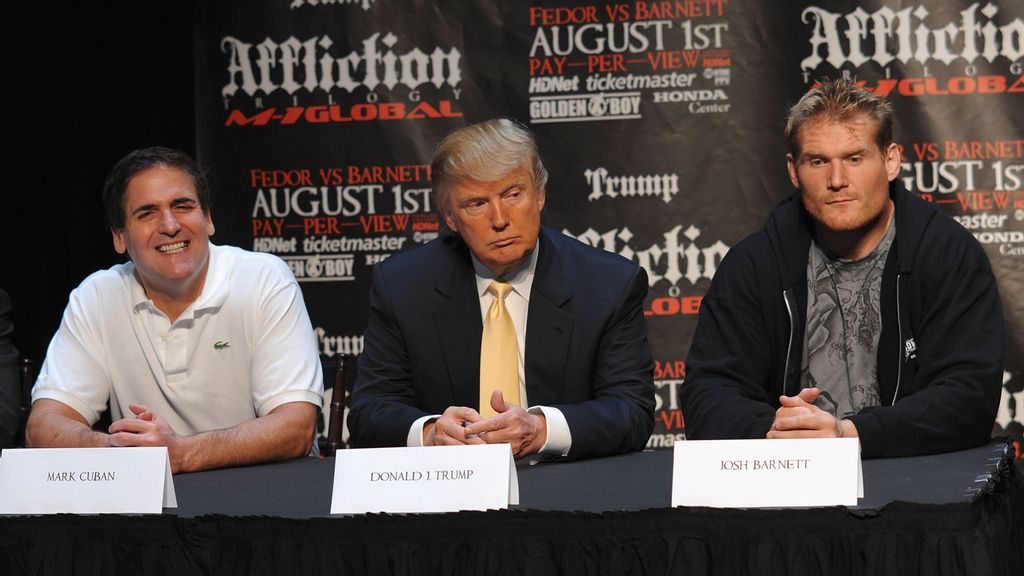 Mark Cuban, Donald Trump and UFC Fighter Josh Barnett attend a press conference to officially announce the Affliction M-1 Global Trilogy at Trump Tower on June 3, 2009, in New York City. Among the many topics the duo discussed were politics, which led to a take on Cuban’s political leanings and what he thought of former President Donald Trump. DIMITRIOS KAMBOURIS/BENZINGA

Among the many topics the duo discussed were politics, which led to a take on Cuban’s political leanings and what he thought of former President Donald Trump.

Cuban told Maher that people want to classify people as woke or non-woke, one of several topics discussed on the podcast.

Maher said woke and liberal are two different things and sometimes oppose of each other, despite people wanting them to be the same thing.

Cuban said it’s disappointing that his generation is now classified as the Fox News generation.

“I’m a boomer, right? We grew up, sex, drugs and rock and roll. All these TV stations that dictate what my peers what to think and thinking about it, it was like, how did this happen?”

Cuban told Maher that his children are not woke.

“My oldest is adamantly pro-choice, but we don’t talk a lot of politics in our house. I don’t try to push anything on them. I want them to think for themselves.”

Cuban on Trump: Cuban brushed aside comparisons to Trump due to being a businessman.

“So I’m at the White House for a healthcare thing and Trump, I didn’t expect it, but he’s like, oh come on into the West Wing. You know, because I’ve been shitting on him the whole time, and he didn’t care, and he’s talking, and he’s talking nonsense about a lot of things. Ten percent legit and 90% nonsense,” Cuban said.

Cuban told Maher that Trump may have changed politics forever.

“So, I think Trump has been political chemotherapy.”

Maher added that people who get chemotherapy sometimes die.

“Right, a lot of them die. A lot of the systems, they change,” Cuban added.

Cuban said his kids may be able to look back and see how Trump changed politics forever.

“My kids, when they’re 60 years old and say, hopefully, say, look, we went through, the country went through the s*** when I was a kid, but we learned from it. I think we’re starting to learn from what happened. You’re seeing them throw him under the bus.”

The duo referenced Rupert Murdoch as one person turning on Trump with the New York Post using the headline about a “Florida man” making an announcement for when Trump declared his intent to run for president again.

People who supported Trump are now moving to call him out, Cuban said.

«Previous Post
Donald Trump’s Tax Returns Are Now Public: What You Need To Know»Next Post
Is Ye Hiding From His Ex-manager’s $4.5m. Lawsuit?