Frogs Thought To Be Extinct Found In Ecuador

The post Frogs thought to be extinct found in Ecuador appeared first on Talker where the black and yellow frog was rediscovered.
By Danny Halpin January 4, 2023
Facebook
Twitter
Linkedin
Email 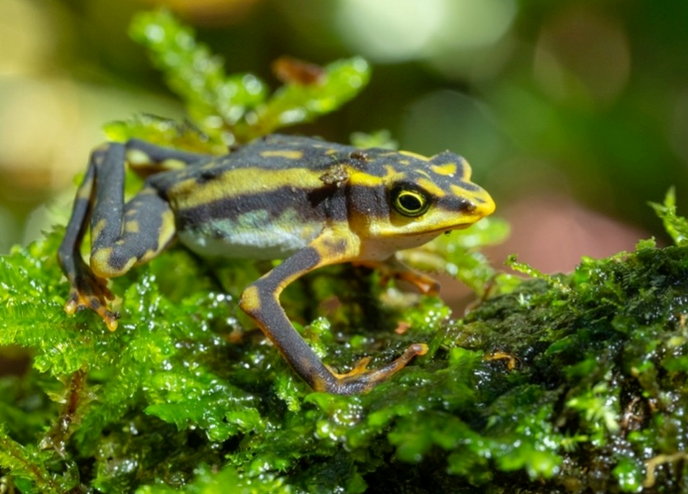 Black and yellow frog, rediscovered by scientists from Michigan State University. Ecologists have rediscovered 32 species of harlequin frogs in Ecuador that were thought to be extinct. MORELY READ/SWNS TALKER

Ecologists have rediscovered 32 species of harlequin frogs in Ecuador that were thought to be extinct.

They said the rediscovery paints a brighter picture for the future of these frogs and for biodiversity in general but stressed the need for conservation action.

Doctoral student Kyle Jaynes of Michigan State University and lead author of the study said: “I can’t tell you how special it is to hold something we never thought we’d see again.

“We want people to walk away from this with a glimmer of hope that we can still address the problems of the biodiversity crisis.”

For 40 years a pathogenic fungus has been decimating amphibious populations around the world and has pushed many species to extinction.

Once a species is classified as extinct the chances of it coming back are slim.

That is why the researchers were so surprised to find the frogs surviving in the Ecuadorian jungle.

Mr. Jaynes said: “But rediscovery does not equal recovery. This story isn’t over for these frogs, and we’re not where we want to be in terms of conservation and protection. We still have a lot to learn and a lot to do.”

Assistant Professor Sarah Fitzpatrick, a collaborator on the project, said: “This study opens up a lot of other questions.

“For example, why are these frogs persisting? What we found points to the fact that there probably isn’t a single explanation.

“And now that we’ve described these frogs, how do we ensure their recovery?”

The team, who published their findings in the journal Biological Conservation, also included researchers from Ecuadorian universities and local indigenous communities who also treasure the frogs.

Asst Prof Fitzpatrick said: “We really want people to understand how important our partnerships are.

“We were invited into this work by our Ecuadorian colleagues. They’ve been working tirelessly on these challenges for decades. There are so many things that they bring to this work that make it possible.”

The fanciful colored markings of poison dart frogs are a warning to predators: If you eat me, you’ll regret it.

These tiny, colorful creatures secrete bitter toxins in their skin, and birds have come to associate their distinctive markings with danger. The frogs’ chemical defenses can cause swelling, paralysis and sometimes even death. Their markings are so distinctive that it seems any frog trying out a new look would be running a serious risk according to the NY Times.

Juan Manuel Guayasamin, an evolutionary biologist at San Francisco University of Quito, and colleagues weren’t looking for a new species—instead, they were taking a closer look at the known one according to National Geographic.

But the team noticed—first in photos and later in lab specimens—surprising variation in the markings between animals from the northern Chocó coastal region and the Andean foothills. (See “‘Extinct’ Toad Rediscovered in Ecuador.”)

“We realized the northern frogs had longitudinal lines, while the southern ones had a more reticulated pattern,” says Guayasamin. Their eye colors also differed. “So we decided to look at the genetics.”