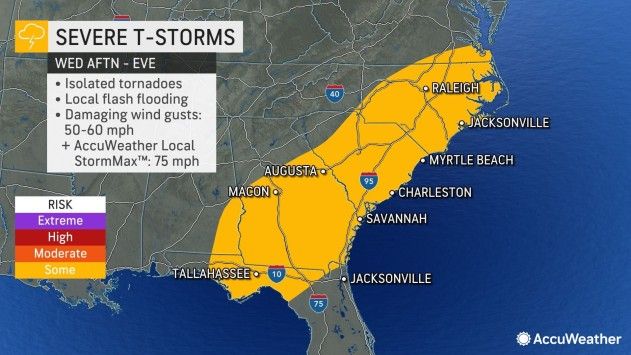 The threat of severe weather will continue on Tuesday as dangerous and damaging thunderstorms track eastward across the southern United States, AccuWeather meteorologists warn.

The severe weather threat will be brought on by a large, strong storm system that will track from the Rockies to the Upper Midwest and central Canada into midweek. Assisting in the severe weather risk will be an extensive area of unseasonable warmth that will be concentrated east of the Mississippi River through the middle of the week.

The area from the southern Plains through the Interstate 10 and 20 corridors of the South Central and Southeast states has been visited by multiple rounds of severe weather since the middle of autumn.

The most recent bout of severe thunderstorm activity occurred during a two-day stretch from Dec. 29-30. Just over a dozen severe weather incidents and a couple of tornadoes were reported during that time. A major outbreak of severe weather occurred a couple of weeks earlier and spanned four days from Dec. 12-15. This multi-day event produced 90 tornadoes from Texas and Oklahoma to Florida.

The secondary severe weather season during the autumn in the southern U.S. is well known in the region and occurs as the jet stream amplifies and stronger storms push out of the Rockies and into the Plains and Mississippi Valley. Occasionally, the secondary severe weather season can extend right through the winter. The occasional strong storm systems are able to tap into warm, moist Gulf of Mexico air, just as they would during the springtime and the autumn.

The setup through Tuesday evening and into Wednesday is no exception.

The main threats from the storms on Tuesday will be powerful wind gusts and flash flooding, AccuWeather Meteorologist Andrew Johnson-Levine said. However, a few of the strongest thunderstorms can produce tornadoes.

In some cases, tornadoes can become rain-wrapped. Hilly, wooded terrain may also hide an approaching tornado until it’s only seconds away from reaching a person’s property. In other cases, a tornado may occur after dark. During the wintertime, severe storms are much less dependent on daytime heating when compared to the spring or summer.

AccuWeather forecasters warn all residents in the path of the storm to seek shelter immediately if a severe thunderstorm or tornado warning is issued for their location.

Storms that continue to push eastward will organize into a line of heavy rain, gusty winds, vivid lightning and loud thunder by late Monday night. As this line continues to advance on Tuesday, some of the storms may become increasingly likely to spin up a tornado.

Additionally, a few thunderstorms ahead of the main line can turn severe and develop rotation independently. This rotation can cause tornadoes to form as well.

On Tuesday and Tuesday night, the risk of severe thunderstorms will be greatest, but not limited to the area from southeastern Louisiana through much of central and southern Mississippi to central Alabama.

The risk of severe weather will continue farther to the east on Wednesday, with the risk of severe thunderstorms extending as far north as southeastern Virginia and as far south as the northern part of the Florida Peninsula during the afternoon and evening hours.

Some of the major cities that could be hit by robust thunderstorms on Wednesday include Norfolk, Virginia, as well as Raleigh, North Carolina, and Columbia, South Carolina.

The overall concentration of severe thunderstorms on Wednesday is likely to be more sparse when compared to Monday and Tuesday, Johnson-Levine said. Many areas may only experience a few downpours, some of which may contain gusty winds and a few rumbles of thunder.

However, a small number of towns can still be hit by a severe thunderstorm on Wednesday. These storms will be capable of producing damaging wind gusts, flash flooding and a couple of tornadoes.