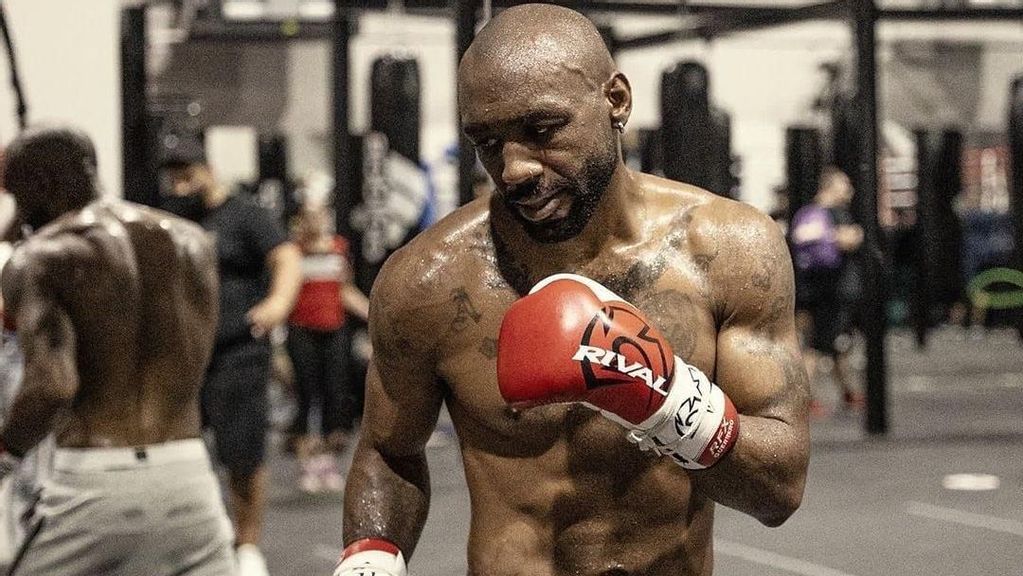 Austin Trout puts in work in the gym ahead of his recent fight while wearing red gloves. With plans to capture another world title in boxing and his first bareknuckle title. AUSTIN TROUT

ALBUQUERQUE, N.M. — With one of the more impressive resumes of any active fighter, Austin Trout at 37 years old, not only continues to fight stiff opposition, but he’s also challenged himself by attempting to conquer yet another combat sport. Trout recently signed with BKFC [Bare Knuckle Fighting Championship]. Trout doesn’t plan to just exist in any sport, the New Mexico native plans to capture another title in boxing, while winning his first title with his new promotion. Using his fists is something “No Doubt” is used to, and whether it be in boxing or bareknuckle, Trout assures that if he stays active, we will get the best version of him.

Trout shares his quest for belts and his new deal with BKFC with Zenger News.

Zenger: You fought  a boxing match in December and in Bare Knuckle in February. How are you balancing training for both events?

Trout: It’s a blessing how it worked out because I don’t have to do too many things differently to get ready for a bareknuckle fight. So, the training won’t be altered too much. There are a couple of different things we gotta do, mainly don’t throw overhands, which I don’t do anyways. It’s a great segway. Not taking the December 9th fight lightly at all, in fact, I’m pretty locked in and focusing on that. I’ll start focusing on bareknuckle after December 9th.

Zenger: In terms of boxing, even at 37 years old and being at this stage of your career, you’re still fighting guys with winning records and who have something to prove.

Trout: Thank you for that acknowledgment. I appreciate that. I’m probably the biggest fight of their career, so you take that winning record and put my name on top of it and you got a lot of motivation to stop my train. I can’t focus too much on this bareknuckle fight because I have a task at hand on December 9th against Jose Sanchez Charles.

Zenger: Did signing with Bare Knuckle Fighting Championship come first or did the boxing date proceed the signing?

Trout: December 9th came first. Legacy Promotions, that’s the promotional company I’m with. They try to keep me busy, which I’m excited about. We had that fight penciled in. It was during the camp for that is when I was called for bare knuckle. Bare Knuckle was like, “Would you fight in bareknuckle?” I’m like, “Do you know where I’m from? I’m from New Mexico, baby! This is what we do.” They said, “Alright, let’s see how we can make this work best for you.” They did. Shout out to David Feldman shout out to Nelson Lopez.

Zenger: Seems like your life hashtag right now is, “I Love to Fight.” Is this about just getting in as many fights, no matter the sport as possible before you call it quits?

Trout: Absolutely! I’m feeling good right now. This is the time to hit the ground running. I understand I’m 37 years old, but while I’m feeling good, I wanna get it while the getting is good. I know it ain’t going to last forever, God willing it does. [Bernard] Hopkins was able to go until he was 50. Not saying that’s my goal. In fact, I don’t have a number. I don’t want to put a number on it. My wife was like, “Could you say 5 years?” And I can’t, because what if it’s one year and I’m just trying to hold on for another 4. Then again, what if it’s 10 years and I told myself 5 and I quit at 5? I can’t put a number on it, but I’m very well aware of my body and brain activity. I’m in the gym training, gauging how I feel against people who I shouldn’t be doing what I’m doing against. If that changes then we gotta change something.

Zenger: You are now 41 fights into your boxing career, but you still seem to be a student of the game.

Trout: Absolutely! The thing about boxing, you never stay stagnant. One style may be a popular style at the moment, but it’s always changing. There are new techniques, and even though it is an ancient art, there are new ways to putting some of these combinations together. I’m always watching. If you go back and look at the fighters from the 60’s and 70’s compared to today’s fighters, it’s night and day. It’s different. The sport is evolving. I try to get back more to the 60’s and 70’s style of fighting, because I don’t think the men of today would stand to the men of those days. I’m just trying to be the best that I can be during any era.

Zenger: What role has Legacy Sports Management played during this phase of your career?

Trout: They believe in me first and foremost. That’s what I needed from any team, someone that believed in me. They made me their priority, because I’m my priority. If they made up the word priorities, there’s no such thing, because there is only one priority. I’m the only junior middleweight that they have, they believe in me, and they’re keeping me booked and busy. That’s the only thing that I have asked for was activity. You get the best out of Trout when he’s active. You keep me out for a year, and you will get that rustiness. I’m a rhythm fighter and it’s hard to get in the rhythm when you haven’t done it in a year.

Zenger: Why are you not accepting fights that on paper seem to be more winnable contest. Why continue to fight tough opposition?

Trout: I got a legacy that I’m trying to uphold. In terms of rankings, my goal is to win another belt. Fighting guys who don’t have a winning record would not do anything for my ranking. I want to propel myself in the rankings. I don’t want any excuses that I’m not fighting quality guys. They know how I get down. I go back and look at guys like Hector Camacho when he was making his comeback. My man had 15 fights in one year. A lot of them were taxicab drivers, guys with losing records, but nonetheless, he fought 15 times in one year, that’s 15 checks. I would love to do that, but if I can’t fight all the time like that, then let’s get some meaningful fights.

Zenger: Is the goal to win another title in boxing and your first title in bareknuckle, or are you taking bareknuckle day by day?

Trout: I want to hold a title there as well. I’m looking at the dynamics of the whole game and you got people that are 2-0 with a belt in bareknuckle. Well, I have my first fight coming up in February. There should be no reason why I shouldn’t get a belt within the next two fights in bareknuckle. I wanna be a champion. I don’t want to half-step anything. If I’m going to do it, I’m going to go for the gusto. My expectations for myself is to shoot for the stars. I expect to be at the top of everything that I do. If I get close to the top, that’s still better than most (laughing). I plan on getting a fast knock out in February in BKFC, I plan on getting a decisive knockout win on December 9th, and then the WBA Convention is a day after my fight. Hopefully, we can get some type of title shot or title eliminator after my fight on Friday.

Zenger: You have fought so many top guys in the 154-pound division, and the division is still one of the best in boxing. Is there anyone in particular you would like to test yourself against?

Trout: I just want to get all of those rematches back from the cats that gave me an “L,” for real. [Jarrett] Hurd, [Jermell] Charlo, Canelo [Alvarez]&mldr; everybody but [Erislandy] Lara to be honest (laughing). Whoever is in my way. Right now, all eyes are on Charlo. He has all the belts, so there really shouldn’t be any other fighter that I’m looking at besides Jermell Charlo. All roads lead to him.