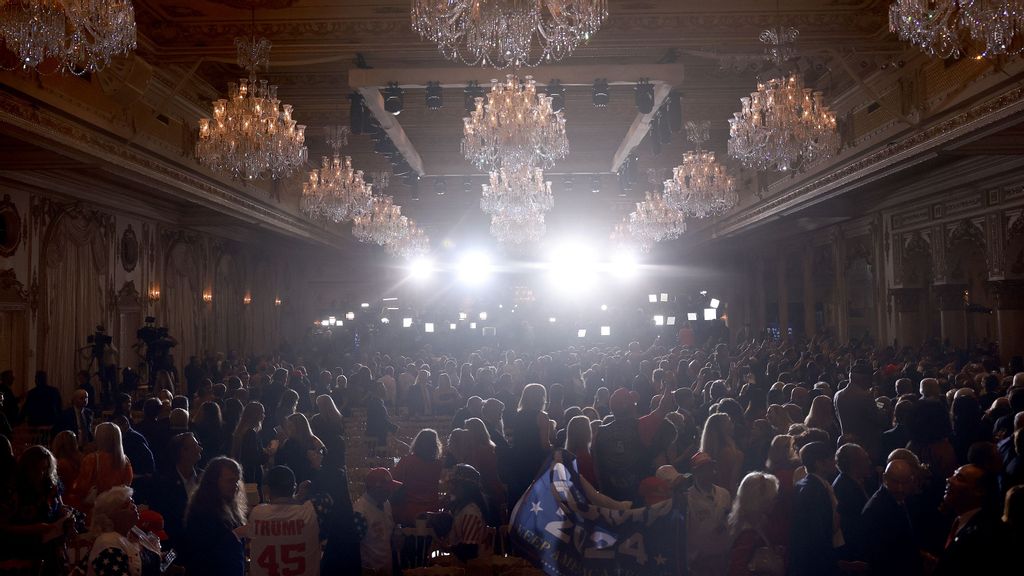 Supporters watch as former U.S. President Donald Trump exits after he spoke during an event at his Mar-a-Lago home on November 15, 2022, in Palm Beach, Florida. Trump announced that he was seeking another term in office and officially launched his 2024 presidential campaign. The former president made an announcement of his NFT that was released for $99. JOE RAEDLE/BENZINGA

Former President Donald Trump shared his “big announcement” Thursday with the introduction of a NFT collection priced at $99 each.

The collection sold out and is trending on NFT trading platform OpenSea. The NFT collection is being mocked heavily on social media and by several celebrities.

Trump announced the launch of a 45,000-NFT collection Thursday with a price point of $99. The NFTs minted on the Polygon (CRYPTO: MATIC) blockchain feature Trump in various superhero, astronaut and cowboy outfits.

Kimmel said the NFTs aren’t even real trading cards, “which is another way of saying nothing.

“And by the way, we already have Donald Trump trading cards – they’re called subpoenas.”

Kimmel went on to say that Trump was selling NFTs “like a crypto bro – while he’s running for president.”

“You know your campaign isn’t going well when your re-election strategy is, ‘Maybe people will like me as a Pokemon.’ Trump was like, ‘These cards are like classified documents – you’ve got to catch them all,’” Fallon said.

Fallon joked that “even the MyPillow guy was going, ‘I think Trump’s lost it.’”

“The ex-president of the United States, the ex-most powerful man in the world, has launched a line of trading cards. It’s Grope-e-mon, with Pikacoup,” Colbert said. “This is the least-dignified attempt at post-presidential merchandising since the launch of Tickle-me-Truman.”

Colbert compared the launch of a NFT collection by Trump to Adolf Hitler having escaped the bunker and “released Mein Komic Book.”

Colbert also poked fun at the timing of the NFT collection launch at a time when NFTs have fallen out of favor.

“He’s a business genius! Jumping in on the NFT market, when it’s at its hottest. Next, he’s releasing an exclusive line of rotary phones.”

“After teasing a major announcement on his social media platform Truth Social, former president Trump announced today he is releasing a collection of digital trading cards. It’s what his doctors are calling ‘a new symptom,’” Meyers said.

“Also, go to love the timing of a former president launching his NFT line the same week a crypto scammer gets arrested. “‘They got SBF? Looks like there’s an opening available, then!’”

“I had some major announcements the last couple of weeks, too,” Biden tweeted, listing several accomplishments.

Author Stephen King chimed in on the NFT collection from Trump on Twitter.

“Obama, Bush and Clinton are working for the poor & disadvantaged in their various ways. Trump is selling $99 trading cards. And running for president. Ain’t that America, something to see,” King tweeted.

While celebrities are having a good time poking fun at Trump’s NFT collection, those who bought the digital cards for $99 may be laughing all the way to the bank.

The collection is trending on OpenSea as one of the top traded collections. At the time of writing, the volume for the NFT collection from Trump was 1,302 Ethereum.

Shares of Digital World Acquisition Corporation (NASDAQ: DWAC), which has a pending merger with Trump Media & Technology Group, are down 1% to $19.91 on Friday. Shares fell Thursday after investors realized the big announcement from Trump was not the news they were hoping for.