Putin’s Nightmare: ‘1984’ Is Now A Bestselling Book In Russia 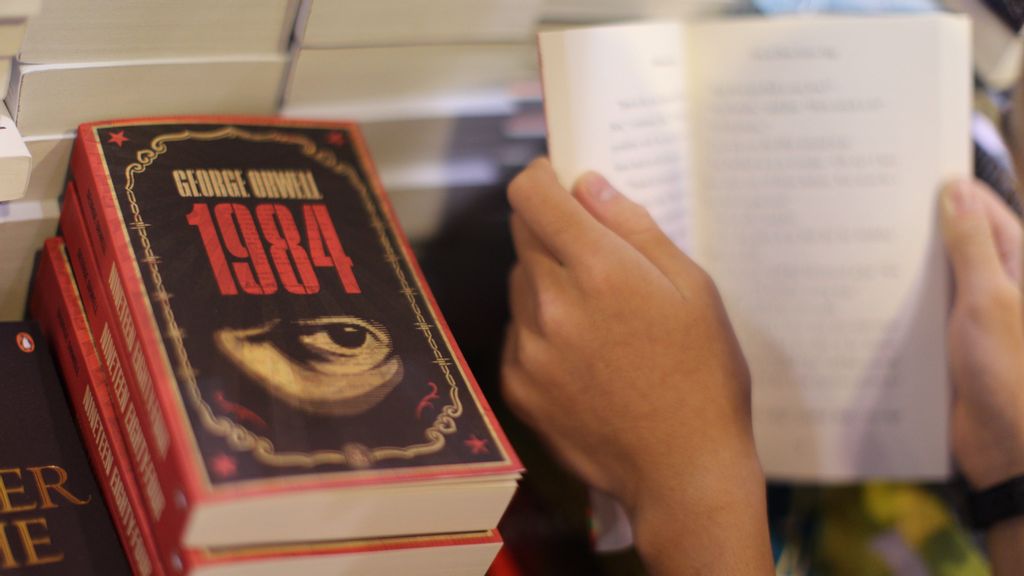 A boy reads a book next to copies of British writer George Orwell's 1984 at Hong Kong's annual book fair on July 15, 2015. The 26th edition of the fair showcased a record number of over 580 exhibitors from 33 countries and regions. George Orwell's 1984 has topped the bestseller list in Russia, during a year plagued by President Vladimir Putin's invasion of Ukraine. AARON TAM/BENZINGA

George Orwell’s “1984” has topped the bestseller list in Russia, during a year plagued by President Vladimir Putin’s invasion of Ukraine.

“For many years, we believed that Orwell described the horrors of totalitarianism. This is one of the biggest global fakes&mldr;Orwell wrote about the end of liberalism,” Russia’s foreign ministry spokesperson Maria Zakharova said at a public event in May of this year, in a quote from Fortune. “It’s you in the West who live in a fantasy world where a person can be canceled.”

Speaking to the publishing house AST in May, the new translator of “1984” Darya Tselovalnikova said that Orwell couldn’t have imagined his tale could come true in the future.

“Orwell could not have dreamt in his worst nightmares that the era of ‘liberal totalitarianism’ or ‘totalitarian liberalism’ would come in the West and that people — separate, rather isolated individuals — would behave like a raging herd,” she said.

The dystopian novel, published in 1949, is a cautionary tale centered around the idea of how truths and facts can be distorted under totalitarianism, mass surveillance and government repression. The novel was modeled in part on Josef Stalin’s Soviet Union.

In the story, “doublethink” is enforced to warp society’s ideologies. The citizens of the fictional country called “Oceania” are taught to accept contrary beliefs such as “War is peace, freedom is slavery.”

Although misinformation is rampant in Russia, due to the abolishment of critical media in the country, the rise in popularity of Orwell’s book is a signal Russia’s society may be questioning what they’re being told, which may cause concern for Putin.

Although the book has been read for nearly 75 years in most parts of the world, the intended-to-be-science-fiction novel was banned in the Soviet Union until 1988, meaning some millennials and older generations may be reading Orwell’s story for the first time.

Putin, who has modeled himself after Stalin, has ruled as an authoritarian head of state for 20 years under various titles and has passed new laws throughout his reign that could allow him to rule over Russia for many more.

The 70-year-old former KGB agent may dream of remaking the Soviet Union under his name and views Ukraine as part of his sovereign national ambit, said Director of U.S. National Intelligence Avril Haines recently.

Under Putin’s rule, political opposition and critical media have been obliterated, protesters thrown into prisons and high-ranking opposition figures are regularly sentenced to years in gulags or die suddenly from mysterious causes.

From the onset of Moscow’s invasion of its neighbor, Putin began to tighten his grip on the narrative, making it a criminal offense to publish information contrary to the Kremlin’s messaging. Even referring to the illegal invasion of Ukraine as a “war” is prohibited, with Putin preferring the term “special military operation,” of which he proclaims Russia’s intent is to eradicate the Volodymyr Zelenskyy-led Ukraine of Nazis.

The Kremlin has also denied that it has targeted Ukrainian civilians, despite attacking the country’s power facilities leaving millions in the cold and dark as winter approaches. Human rights atrocities have also been heavily documented in Ukraine with widespread reports of brutality, including rape, indiscriminate killings and forced deportations, which Russia denies.

“Not merely the validity of experience, but the very existence of external reality was tacitly denied by their philosophy. The heresy of heresies was common sense,” Orwell writesin one passage of the book. While meant to describe the situation in a fictional dictatorship — the sentiment might be applied to Russia today.