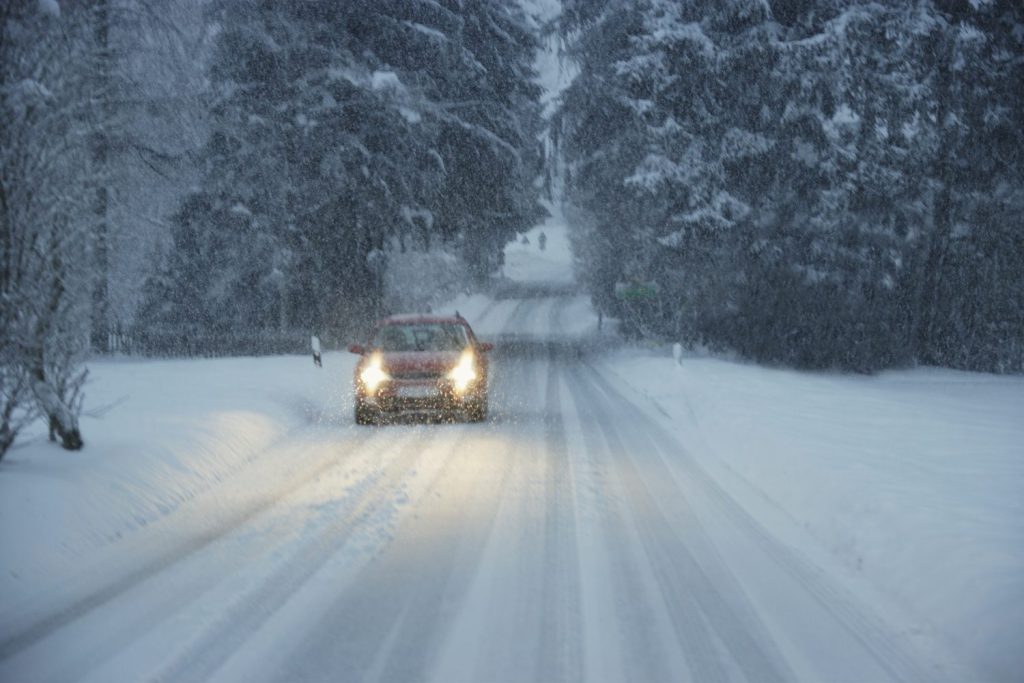 A regular passenger car driving in the snow with caution in the middle of the country. About 33% of American drove less due to the cost of gas and 19% of the drivers plan to drive more during the holidays. ALTRENDO IMAGES/SWNS TALKER

Thirty-one percent of Americans took fewer road trips this summer directly because of the cost of gas, according to new research.

A survey of 2,000 drivers looked at their winter driving plans and found that with the cost of gas being down since the summer, nearly a fifth said this will impact how many road trips they make this winter (19%).

Some plan to brave the winter roads more than last year. Thirty-eight percent of respondents took one or two road trips during the winter last year, but a fifth of drivers plan on taking more this year (19%).

More than a third of Americans will be driving to spend the holidays away from home this year (39%), with the average person willing to drive 116 miles, or three and a half hours, to their holiday event or festivity.

Conducted by OnePoll for Cobra, the survey found that while it’s an inevitability, seven in 10 people try to avoid driving more than necessary in the winter (69%).

When they do need to be on the road in snowy winter conditions, people are more likely to drive slower (65%), give other drivers more space/time (65%) and stick to straight or main roads (44%).

Two in three drivers also feel safer when they have someone in the car with them, so they can have an extra pair of eyes on the road (87%).

Although 94% of Americans consider themselves a safer driver than average, most claim they drive more cautiously in the winter (85%).

Nearly two-thirds of people who drive are concerned about other drivers, saying they drive more dangerously or don’t change their driving habits to account for the wintry conditions (64%).

Similarly, 84% are most afraid of driving in winter than any other season – especially respondents in the Midwest (92%).

Equipment like strong-grip tires (67%), a jump starter (46%) or a dash cam (23%) would also lead to people feeling more confident on the road this winter.

“As we enter peak winter months, we’re starting to see an uptick in travel as more and more people look to make up the time they lost during the pandemic – and, most recently, the hike in gas prices we saw this summer,” said Gail Babitt, CEO of Cedar Electronics, parent company of Cobra. “Whether it’s a drive to see family for the holidays, a winter road trip, or simply a drive to and from the office, it’s more important than ever to ensure drivers are equipped with tools to keep them safe.”

Before heading out on a long trip in the winter, most drivers would get their car checked out (82%), with one in seven admitting they’re not confident that their vehicle wouldn’t have any complications.

Respondents also shared some words of wisdom for making winter driving less stressful like “on clear roads watch out for ice,” “always leave yourself extra time to get where you are going and stick closer to the speed limit signs” and “make sure there is a car care kit in the car – a pillow and blanket, snacks, water, anything that would make someone more comfortable.”

“Whether it’s a dash cam for that second pair of eyes on the road, a jump starter for those dreaded ‘dead battery’ moments or a radar detector to help alert you to potential issues, it’s more important than ever for drivers to equip themselves with the means to stay safe on the road this winter season,” noted Babitt.

HOW TO PREP YOUR VEHICLE FOR A ROAD TRIP

This random double-opt-in survey of 2,000 people who drive was commissioned by Cobra between October 18 and October 24, 2022. It was conducted by market research company OnePoll, whose team members are members of the Market Research Society and have corporate membership to the American Association for Public Opinion Research (AAPOR) and the European Society for Opinion and Marketing Research (ESOMAR).