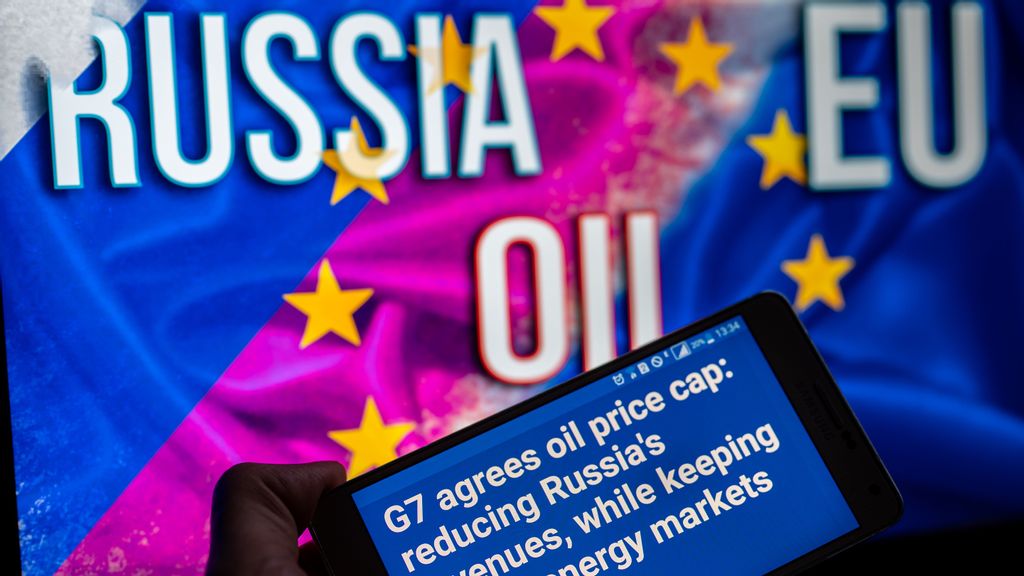 EU logo with Russian flag on screen with EU Commission press release on mobile. EU Russian oil Price cap, EU agrees $60 price cap on Russian oil. In Brussels, Belgium on 4 December 2022. The European Union relied on Russia for its natural gas, which now they're looking to rely on less. NURPHOTO/BENZINGA

Until the Russia-Ukraine War, the European Union (EU) relied on Russia for roughly 39.2% of its natural gas supply.

Today, it’s barely receiving any gas or oil from Moscow due to sanctions and the more recent G7 price cap, which went into effect Monday, Dec. 5. The initiative, led by the U.S. Department of the Treasury, prevents Western companies from shipping Russian oil unless it is sold for less than $60 a barrel (barrels are currently priced at $85 under Brent, the international benchmark for crude oil).

Kremlin spokesman Dmitry Peskov, asked in a conference call how the oil price cap might affect the war, said, “The economy of the Russian Federation has the necessary potential to fully meet all needs and requirements within the framework of the special military operation, and such measures will not affect this.”

Additionally, a group of 23 oil-producing nations, known as OPEC+, have agreed to maintain its existing policy of reducing oil production by 2 million barrels per day.

Although the EU has filled its gas storage facilities to nearly 94%, many of its nations used Russian gas and oil to fill those reserves, according to Gas Infrastructure Europe. The EU is now on a mission to end its reliance on Russian fossil fuels by 2027.

Hunting for countries that can fulfill the EU’s supply needs will likely be difficult. In the first four months of 2022, the U.S. sent nearly three-quarters of all its liquefied natural gas to Europe with daily shipments to the region more than tripling from last year’s average, the U.S. Energy Information Administration (EIA) reported.

Furthermore, the U.S. economy is undergoing an energy supply crunch itself, as the strategic petroleum reserves (SPR) is now around 405 million barrels, or 57% of storage capacity — levels not seen since 1984. This is down from almost 580 million barrels in February and more than 650 million barrels during the first coronavirus wave in 2020, reported the Energy Information Agency.

“Moscow has already made it clear that it will NOT supply oil to those countries who support an anti-market price cap,” Mikhail Ulyanov, Russia’s permanent representative to International Organizations in Vienna said via Twitter.

With this being the case, Europe may have to look to U.S. producers of oil and gas such as Phillips 66 (NYSE: PSX), Cheniere Energy (AMEX: LNG), and ExxonMobil (NYSE: XOM).

“This is expected to carry on into December as the strong sanctions begin,” said Peter William on CNBC, trade product manager at VesselsValue. “Russia has potentially found substitute markets for their crude with both India and China increasing seaborne imports from Russia.”

As Russia is still transporting large amounts of liquefied natural gas to Europe, there are now mounting concerns the Kremlin will cut the EU off from its energy products altogether, in response to the price cap. If this is the case, the EU will have to find a way to fill its oil and gas reserves without Russia next year, which it has never had to do.

There’s also the worry that Russia might use evasion tactics, similar to those used by Iran and Venezuela, to continue shipping without complying with the price cap.

Meanwhile, as China loosens its Covid-19 restrictions and begins re-opening locked-down cities such as Shenzhen, it will continue to stockpile Russian crude at a discount. Recall earlier this year when Russia, overtook Saudi Arabia as China’s top supplier for oil.

«Previous Post
In A Throwback To Soviet-Era Policies, Russia To Introduce Mandatory Military Training For Students»Next Post
WNBA’s Griner Is Happy To Be Home After Prisoner Exchange