The possibility of a $2 billion a day cost to the American economy is on the line as President Joe Biden pushes for a deal
By Natan Ponieman December 2, 2022
Facebook
Twitter
Linkedin
Email 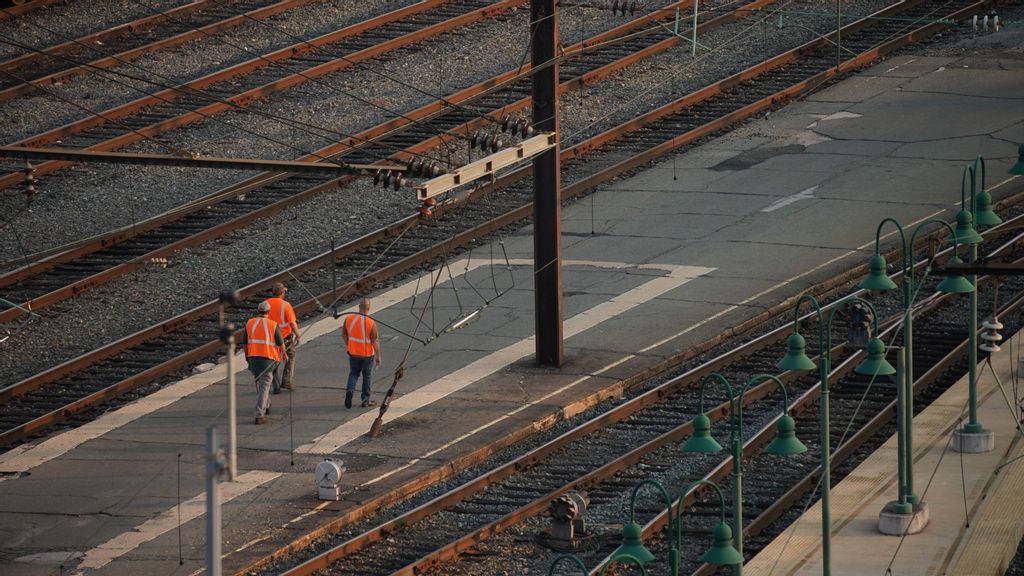 Railway workers walk through Union Station in Washington, DC, on September 15, 2022. - US rail companies and unions have reached a tentative deal to avert a major strike over the weekend, US President Joe Biden said in a statement on September 15. The railroads and the Biden administration have focused on wage increases included in the deal between the railroad companies and the unions. STEFANI REYNOLDS/BENZINGA

The possibility of a $2 billion a day cost to the American economy is on the line as President Joe Biden pushes for a government-led negotiation between railroad companies and rail unions.

On Wednesday, the U.S. House of Representatives passed a piece of legislation that would make rail companies agree to demand posed by the unions in an effort to avoid a country-wide railroad shutdown.

According to the Association of American Railroads, a nationwide rail shutdown could cost more than $2 billion every day in lost economic output.

The Biden administration was using The Railway Labor Act of 1926, which gave the U.S. government unusually strong powers to regulate collective bargaining for the rail sector.

The bill passed the House 290 to 137 with bipartisan support of 211 Democrats and 79 Republicans approving it, reported CNBC.

The bill established new contracts for railroad workers which added an extra paid day off, new 24% pay increases from 2020 through 2024 and immediate payouts for an average of $11,000.

Paid sick leave — the main bone of contention between railroad workers and rail companies — was covered in a separate bill, which pushed for seven days of paid sick leave a year, instead of only one. It was passed by a closer vote, 221 to 207.

Both bills are now headed to the Senate.

As it stands today (Dec. 1), railroad workers have no guaranteed sick days or the ability to access vacation time in the case of doctor checkups and emergency medical leave.

According to New York Magazine, an operational strategy adopted country-wide by the major railroad companies called “precision-scheduled railroading,” was the reason behind the lack of certain rights for railroad workers.

The strategy looked to optimize resources by transporting “more freight using fewer workers and railcars.” The strategy led the industry to reduce its workforce by 30% in the past six years, pushing companies to tighten their grips on employee attendance.

Four of the largest railroad unions, representing more than 50% of the railroad workforce, have yet to ratify the new agreements with the companies they are employed by and have threatened to strike, freezing a 140,000-mile network of rails in 49 states.

“This overwhelming bipartisan vote in the House of Representatives makes clear that Democrats and Republicans agree that a rail shutdown would be devastating to our economy and families across the country,” said Biden after the passage of the bills.

The railways & workers should go back & negotiate a deal that the workers,not just the union bosses,will accept

But if Congress is forced to do it,I will not vote to impose a deal that doesn’t have the support of the rail workers

Rubio struck out at union bosses, the contract process required union members to vote on whether to ratify the tentative agreement. The industry’s biggest union, alongside three others, voted it down, while the rest of the 12 total unions involved in the negotiations voted to ratify.

The president urged the Senate to act quickly, as a railroad strike would not only inflict vast damage to the economy but also affect the daily lives of many Americans.

The country relies on the railway system for 40% of its annual freight. Key commodities such as fertilizer used in food production and chemicals used to clean drinking water rely on trains for transportation.

“Without action this week, disruptions to our auto supply chains, our ability to move food to tables, and our ability to remove hazardous waste from gasoline refineries will begin,” said the president.

Both bills will be voted on separately by the Senate, meaning that the paid sick leave issue could miss approval if the Republican Party were to adopt a filibuster strategy.

“They are still working, I think, on final amendment text language and negotiating back and forth on time agreements and vote thresholds and things like that,” John Thune told CNN in the Capitol.