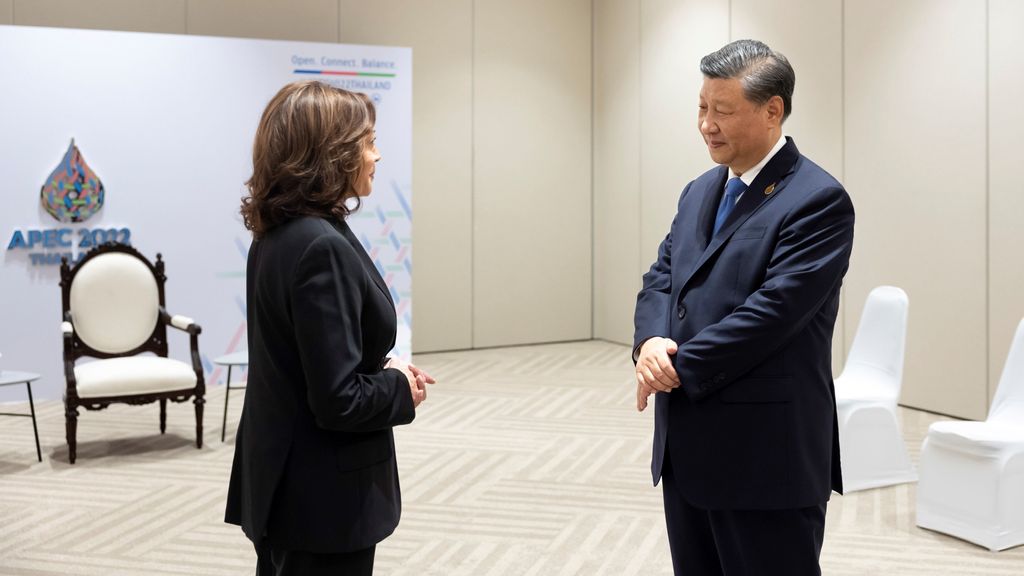 Today in Bangkok, I greeted President Xi before the APEC Leaders Retreat. I noted a key message that President Biden emphasized in his November 14 meeting with President Xi: we must maintain open lines of communication to responsibly manage the competition between our countries.

Relations between Washington and Beijing have been contentious over several issues — from trade and technology to China’s claims to Taiwan. The U.S. has also been critical of China’s handling of Hong Kong and human rights.

During the APEC meeting, Harris told world leaders the U.S. would center APEC on sustainable economic growth. That builds on Thailand’s success in setting new sustainability goals this year.

Harris later took part in a ceremony in which Thai Prime Minister Prayuth Chan-ocha handed over the chairmanship of APEC to the U.S., which hosts the group’s meetings in 2023.

On Friday, Nov. 18, Harris pitched the U.S. as a reliable economic partner, telling a business conference on APEC’s sidelines: “The United States is here to stay.”

A key concern looming over the conference was North Korea.

Harris’ meeting with Xi came after the U.S. said it is looking for China to become more involved in managing its ally, North Korea.

On Friday, North Korea test-fired a ballistic missile that officials said could hit the U.S. mainland.

“We strongly condemn these actions, and we again call for North Korea to stop further unlawful, destabilizing acts. On behalf of the United States, I reaffirm our ironclad commitment to our Indo-Pacific alliances,” she said.

However, both Harris and Biden used the meetings with Xi to underscore the importance of stable relations with China.

Xi told Chinese state broadcaster CCTV the conversation with Biden was strategic and constructive and had crucial guiding significance for the next stage of China-U.S. relations.

“It is hoped that the two sides will further enhance mutual understanding, reduce misunderstanding and misjudgment, and jointly promote China-U.S. relations to return to a healthy and stable track,” he said.